When Silver overworks himself it's already bad enough, but when the weather gets worse at the same time...

I wrote this back in April and decided to finally translate it to English, enjoy!

Silver has his face buried in the pillow, and he’s very concentrated on not feeling nauseous, so it takes him a few seconds to register the voice.

“Hi,” he calls out softly without raising his head, because any light feels as blinding as a sudden flash of xenon lamps in the night. He hears Sonic walk round the bed and sit on it. He’s so close that Silver feels his body heat. Then it is so much warmer, because the other hedgehog decides to sprawl right on top of him, somehow not bending a single spine, and gives a deep satisfied sigh.

“What— D-did you come to talk about the weather?!” Silver’s voice cracks in the middle of a sentence, and he groans into the pillow.

“Nope, just checking on you. Dude, come on, we know you aren’t at your best when the weather unexpectedly gets worse, and you also overworked yourself yesterday.”

Before Silver manages to think up an answer, Sonic throws an arm over him, lays his head on Silver’s shoulder and overall gets comfortable on his back, snuggled up to him in all the best ways. His weight and familiar brush of his Chaos energy make the light grey hedgehog feel safe and secure, and well... cozy. Sonic also blocks all remaining light, and finally Silver’s headache slips into background and he lets himself relax...

A few hours later Shadow finds them sleeping in the same position and spends almost a whole minute watching them with a tender expression on his face. Then he mercilessly wakes Sonic up to fold back the blanket and get under it, while the blue hedgehog sits on the floor and complains about his leg falling asleep.

“Stop whining, you could have gotten comfortable from the beginning.”

“Was thinking more about Silver being comfortable to be honest...” Sonic whispers still grimacing and rubbing his leg. He gets into bed on Silver’s other side and snakes his arm under his longer spines to be able to press himself closer and reach Shadow at the same time. Shadow catches his hand and holds it tightly, letting his other hand drop on Silver’s waist. They will probably change their sleeping positions at some point during the night, but for now Shadow is comforted by their touch, assured of their presence in his life. And he closes his eyes to Silver’s soft snoring and Sonic’s sleepy purring. 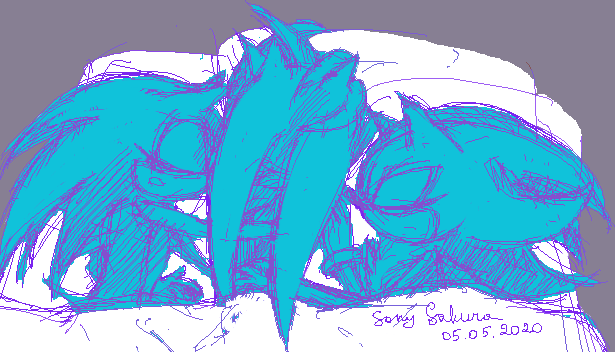