You never know who you will find at your local café and sometimes you just have to start from scratch.

Partially inspired by the following: a little residential cafe my friend used to frequent abroad, my favorite bakery, the café in "internet café," sleep deprivation, and if you squint a sub-plot in a fanfic for a TV series that I won't name yet.

Thank you Scooby for the beta read and Gumi for hosting the event!

Han Wenqing was running a new path when he saw a storefront had changed. What had once been an ordinary internet café was different somehow. There was a line out the door, which struck him as odd. He slowed his tempo as he approached.

The distinct smell of freshly baked bread hung in the early morning air.

Through the clear window, the front desk had been replaced by large display cases. However, when he looked past the entryway, he saw that there were still ample rows of computer terminals. There were even a handful of occupied computers to the side of the front cases.

On closer inspection, there were two lines. One went straight up to the front and after a brief exchange, the customer would go over to one of the computer stations in the back. The other line wound around baskets of fluffy bread and led up to a man running a cash register.

There were a couple people behind the cases, all running in and out with tongs, plates, and white boxes at the behest of the customers in the second line. Occasionally one worker would flit out to bring a plate to the small group of stations to the right.

From outside, Han Wenqing couldn’t make out what exactly was in the cases and the line for the register was far too long for him to stop today. After all, he needed to make it to the restaurant in time for lunch prep and service.

Before he could cool off too much, he continued running back home. He did make a mental note to investigate later.

That same day, he temporarily forgot about the curious addition to his neighborhood through the rush of a lunch and then dinner service.

But when Han Wenqing got up early the next morning for his run, he found himself moving directly toward the corner internet café. As he approached, he saw a pair of employees loading the front cases with long silver trays laden with items for sale. There were already a handful of people in line, waiting patiently outside the door.

It seemed he had arrived at the perfect time. Out of curiosity, he decided to join them and waited until a younger girl exclaimed.

At that odd phrase, Han Wenqing watched the movement of an employee displacing all the terminal users from the handful on the right. The five customers were shuffled to the main rows of terminals before a woman poked her head out the front door.

The two girls at the front immediately jumped forward as the lights around the cases lit up. The four others in front of him followed more sedately, but they had already started to scramble in their bags for their wallets.

As Han Wenqing walked through the door, he was once again hit by the smell of fresh bread and pastries.

A young man in an apron said and squeezed around him. The aproned man carried an armful of packaged fresh bread that he dumped in each basket lining the front windows.

A man straightened up from putting together an order for an office lady. She checked her phone and huffed quietly at the distraction.

“Well, if Han Wenqing wants one of the coveted café terminals, he’s out of luck. Unless he wants to wait a few hours.” He drawled and leaned against the case.

Han Wenqing blinked and immediately examined the man who’d clearly rolled his eyes, but then their eyes met. Two sets of eyes widened, and they stared at each other until the woman coughed.

“I really need to get going.” She checked the time on her phone once more.

“Yeah, yeah. Anything else?”

Two boxes sat on the counter and Ye Xiu pointed to the register total. In record time, Ye Xiu took the proffered money and the woman pushed past Han Wenqing through the door with her purchases.

“Huh. Old Chef Han. Like I said, if you want one of the café terminals, you’re out of luck. All five filled up before you.” A familiar, lazy grin stretched across his face. A grin he hadn’t seen in a year.

Different types of croissants sat alongside fruit tarts and roulades and he even spied some cases in the back for steamed buns.

“They did say that.” Ye Xiu nodded. “Hey, Little Qiao. Take over the front counter for me. You can call Old Wei over for help.”

“Y-yes, Chef!” The aproned young man startled to attention and rushed to the register.

Ye Xiu chuckled and tilted his head to the right and Han Wenqing took that as a sign to follow.

He followed Ye Xiu through the back, through a surprisingly well-equipped professional kitchen and up some stairs. Once alone on the roof, the other man flicked out a cigarette and produced a lighter.

“I never thought I’d see you here. Isn’t really your style, is it?” Warm eyes danced in the rising light. Soon a deep breath and then a wisp of smoke rose into the air. “None of the uniform and regimented service of a Tyranny lunch or dinner set.”

“I think I should be the one saying that.” Han Wenqing stated evenly. “What were you thinking? Quitting and surfacing at some… internet café turned actual café a year later?”

“Did you know that Excellent Era lost one of their Michelin Stars last month?” He asked.

“Yeah, I read about that.” Came the quiet reply and then another drag on the cigarette. “I have nothing to do with Excellent Era anymore, but I still wish them the best.”

“They’re still using a version of your menu though.” Han Wenqing frowned.

“The bones may be the same, but…” Ye Xiu trailed off. “What are you doing here anyway? Surely it isn’t to use a computer. Though the full-service café terminals are getting popular. We might have to expand them.”

“What exactly is all this?”

“So, you didn’t hear about us?” A tilt of the head. “Those five terminals to the side are like tables at a café. From there they can order any of our items or drinks for table service. You can only grab one if you’re first in the day or someone leaves. Rest works like a normal internet café, just the other customers have to wait in line like the rest and we go until we sell out.”

“What a… novel idea.” Han Wenqing muttered. “This is where you’ve been? From top of the culinary world to a neighborhood café? Not even a proper café.”

“You might remember that Excellent Era started out as just a café.” Ye Xiu sighed. “I signed a non-compete. One year.”

“And this is where you landed…”

“Mhm… Owner didn’t know what to do with the extra space and there were already the bones of a professional kitchen. I think from a restaurant that was here before the internet café expanded or something. It just needed some capital and refining. Next thing you know…”

“The next thing you’re wreaking havoc on what a café should be. I see you still attract youth to corrupt.”

“Little Qiao and the others? But they’re so cute, I can’t resist helping them. Little Qiao was wasted making nothing but different variations of mahua.” A grin widened.

“You’re poaching apprentices from other restaurants?”

“You never said what you were doing here. This is a far-cry from Tyranny across the city. I know you haven’t lost your star at least.”

He would allow the deflection, this time. “I sometimes pass by on my morning runs.”

“Well then, do you want a box to take on your way for your terrifying Sous chef and staff to dissect?”

“Sure.” He relented and waited for Ye Xiu to finish his cigarette.

On the first floor, Ye Xiu pulled together a box and filled it so quickly Han Wenqing didn’t see what had been put in.

“Here, don’t peek or you’ll ruin the surprise.” Ye Xiu used some flower printed tape to close the top and handed it over. “Enjoy, Old Han. I expect to see you back here sometime soon. Even if it’s just for some carb loading for your runs.”

As instructed and despite his curiosity, Han Wenqing didn’t open the box until he had Zhang Xinjie by his side in the Tyranny kitchen.

The first thing that stood out were fruit laden tarts with cream piped to look like puppies. On the inner lid of the box read a message: 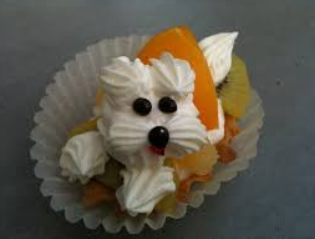 I completely forgot the part about including the link back to the post if you want to join! You can see the rules and participate by reading from here: https://unrivaled-super-hottie.tumblr.com/post/632010573515751424/do-you-think-you-have-what-it-takes-to-pull-off-a