The Jin Siblings are not experts and their advice should never be followed....
An advice show for the modren era, hosted by our favorite band of half siblings. Suggested talking points: Serial Killers, Wei Wuxian's Abs, and Vegetable Puns.

This idea hit me out of the blue while washing dishes and just had to be made.
-
TW: Murder and Cannibalism mention in the course of jokes 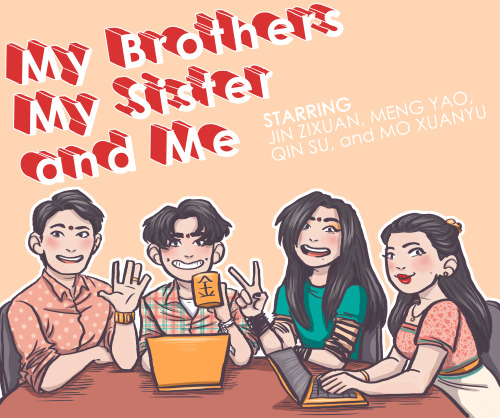 [Fantastical art by littlesmartart on tumblr]

Jin Zixuan: Hello, everybody and welcome to My Brothers, My Sister, And Me, an advice show for the modren era, I’m your oldest brother, Jin Zixuan.

Meng Yao: That was something. A little something new.

Jin Zixuan: I liked it.

Jin Zixuan: Well, welcome everyone, this is an advice show where we take your questions and turn them, alchemy like, into wisdom. How has everyone been doing? Any news? Any big things brewing?

Mo Xuanyu: Now, can I just say, something that’s been on my mind–

[crosstalk] Mo Xuanyu: No! No, no, listen! Just listen!

Jin Zixuan: We’re all listening, A-Yu, take it away.

Qin Su: Wow, you really have him riled.

[crosstalk] Jin Zixuan: Ohhh, is this the groupchat spam of–-?

Meng Yao: And I rue the day I ever did. Rue it.

Jin Zixuan: You make it into a sauce, thicken that right up.

Mo Xuanyu: [incredulously] A what? A–-

[crosstalk] Meng Yao: [flatly] This is–-

[crosstalk] Jin Zixuan: [sheepish, smile in voice] No? A roux, you thicken-–it’s a food thing–-

Meng Yao: [flatly] This is just the best opening we’ve ever done. The most coherent.

Qin Su: Oh yeah, I’m sure that’s real topical with the high percentage of our audience that are professional chefs.

Jin Zixuan: My wife is a cook! I get-–I get the obscure puns! I was steering us-–

Jin Zixuan: I was purposefully trying to steer us away from Xuanyu’s obsession with Lan Wangji’s boyfriend’s abs.

Mo Xuanyu: His theories, his videos, his brain, his insta–-

[crosstalk] Jin Zixuan: Okay, in my defense, I was–-

[crosstalk] Meng Yao: What happened to the paperwork–-

Qin Su: [loudly, overriding] ‘A FEW MONTHS AGO I was out shopping with my dog at a local farmers market–the ones with fruits and vegetables and whatnot–’

Jin Zixuan: Yeah, it’s not–it’s not like some sort of…I don’t know where I was going with that.

Jin Zixuan: I mean, I guess, but my brain literally just stopped in the middle and was like, ‘Hey, you want thoughts? Huh. That’s a shame.’

Mo Xuanyu: [still laughing] That was some–-

Meng Yao: That’s not even remotely–-

Jin Zixuan: Orange you glad we didn’t do food puns?

Qin Su: Oh, that was some low hanging fruit.

Meng Yao: [under his breath, ill contained grin in his voice] This is so stupid.

Jin Zixuan: This bit is the pits.

Meng Yao: It is, I can very safely tell you that it is. This isn’t-–[short bark of laughter] this isn’t even anything, you guys, this is easily the worst–-

Qin Su: You don’t carrot all for this bit?

Meng Yao: [dryly] No, you’re plum out of good ideas.

Jin Zixuan: Is that why you were so quiet?

Meng Yao: [defeated] For the listeners at home, Xuanyu has changed the font of every question in our shared document into illegible vegetable letters–

[crosstalk] Qin Su: How did you do that so fast–-

Meng Yao: [still defeated] And now he’s changing the color of each letter to reflect the proper color of the veg-–this is incredibly counter productive and so much effort for a stupid bit that wasn’t even-–

Jin Zixuan: How are you so fast with that? You’re just–-

Jin Zixuan: We are currently engaged in a font battle. A-Yao is attempting to–-ah, but A-Yu has made each letter 75 point and it’s taking up the entire page–-

Meng Yao: [triumphant] And there you go.

Mo Xuanyu: ‘You no longer have permission to edit this document’?! Whaaaat?

Qin Su: ‘The ones with fruits and vegetables and whatnot–and on the way home-–’

Meng Yao: The question isn’t even about the fruit–-

Mo Xuanyu: They were painting a picture.

[crosstalk] Mo Xuanyu: Did you pick him up like a penny?

Meng Yao: Like he was on the side of the road?

Qin Su: [laughs] Hah! Funny you should say that, because the next line is; ‘Literally. I found him by the side of the road-–’

Meng Yao: What the fuck--

Qin Su: ‘I found him on the side of the road, unconscious. Well, my dog did, at least (I’m blind, btw). He seemed to be beat up pretty bad and didn’t wake up when I tried to talk to him, but he was alive.  There was no one else around and he didn’t seem to have any broken bones, so I picked him up and carried him home-–’ You what?

Jin Zixuan: Must have been hard with all the groceries.

Meng Yao: This is literally insane.

Qin Su: ‘I have some medical skills–-’ Uhhh, that’s great but do you have a cellphone? In which you could have called the cops?

Mo Xuanyu: Is this a fanfic? Are we being pranked?

Meng Yao: This can’t be real.

Qin Su: [talking faster] ‘I have some medical skills, so I patched him up as best I could–-’

Meng Yao: You mean to tell me–-

Qin Su: [loudly, over both of them] You’ve gotta let me finish, because this gets better.

Jin Zixuan: There’s more? Where do we get to the part where they need help?

Meng Yao: About 4 sentences ago, Zixuan-ge.

Qin Su: ‘And I was thinking about bringing him to a hospital, but I second guessed myself because it was in a rough part of town-–’ [despairing] I just…[increasingly disbelieving] ’and I didn’t want to get him in trouble if I didn’t have to. Anyway, he woke up on his own and he was okay, just sort of banged up. My seeing eye dog has been acting really weird and growling at him, but he’s been nothing but sweet to her. We’ve talked and he’s incredibly sweet and funny-–he makes me laugh every time we talk and I have to admit, I kind of have a crush on him. Now, 2 weeks in–-’

Qin Su: ‘I still don’t know his name. Jin Sibs, help; Is it too awkward to ask at this point?’ That’s from Clueless On Courtesy.

Meng Yao: So. Let me get this straight.

Meng Yao: You found a guy. Beat to hell. In a ditch. Decided ‘finders keepers’. Brought said stranger into your home--

[crosstalk] Meng Yao: Yeah, didn’t call the police or emergency services or anything. Patched him up yourself. Ignoring the opinion of your esteemed protector and companion–

Meng Yao: Yes, the dog. And just…let him live with you? For 2 weeks? Without. Knowing. His. Name.

Jin Zixuan: I mean, it’s not our job to judge on this show, just answer questions, have some goofs–-

Meng Yao: Oh, I’d love to have some goofs, Zixuan-ge, I would love that, except this question has me fearing for the life of our listener–

Qin Su: Hey, he hasn’t murdered them yet!

Meng Yao: I don’t think I need to tell you that any phrase that has the word ‘murder’ in it and ends with ‘yet’ is as precarious and flimsy as a fucking cliffside made of children’s dreams–

Mo Xuanyu: Maybe the dog wants him to pay rent.

Qin Su: Y’know, question asker, I think I’m gonna go out on a limb here and say that nothing about this situation is conventional and everything is on a sliding scale from awkward to disastrous already, so why don’t you go ahead and ask him? What’s the worst that could happen?

Jin Zixuan: [mutters]  I was taking a drink.

Qin Su: I’m pretty sure he would have eaten them already if that were the case.

Qin Su: [sarcastically] Oh right, I got my amoral serial killers mixed up, my mistake, I’m so sorry.

Meng Yao: How’s this–-you have to ask so you at least know whose name to spell out in your own blood as you’re bleeding out on your kitchen floor from a knife wound so the homicide detectives can have a head start on putting useless information in your cold case.

Qin Su: Let’s bring this back into jokes territory. Can you boys join me in jokes land? Land of the jokes? Let’s get on up here and feel it out, shall we? What’s some advice we could give this dear listener?

Qin Su: What if–what if they just give him a name? He’ll either correct you or you’ll have a name you could call him!

Mo Xuanyu: I stand by Teddy.

Jin Zixuan: Call him…hey, pick one of our names, see if he listens to the show.

Mo Xuanyu: What an awkward listening party this would be.

Jin Zixuan: Us just calling him a murderer and implying he’ll kill and eat question asker.

Qin Su: Call him your dog’s name, see if he gets annoyed enough to correct you.

Meng Yao: I mean, it has to be on purpose, right? No matter how weird your meeting of someone is, this person would have introduced themselves once he woke up, I mean, there’s no way they just went, ‘Hi, I’m-–’

Mo Xuanyu: We’ve been talking about food. I want a frosty.

Meng Yao: Right. No way they said, ‘Hi, I’m Frosty,’ and he just forgot to tell them. Frosty didn’t say this guy had amnesia, just that they didn’t know his name. Did they not ask? Did it just slip their mind?

Qin Su: This is one of them.

Meng Yao: I mean…I have nothing. Besides, yes, ask him his fucking name, the only advice I want to give is ‘maybe don’t live with random, nameless strangers you picked up off of the side of the road??’

Jin Zixuan: And definitely don’t fall in love with them.

Mo Xuanyu: [cheerfully] Man, you guys have no romance in your souls.

Once again plugging impeccable art by littlesmartart and impeccable podfic by blackglass, pandamug, RevolutionaryJo, rhythmia
I have no idea how I'm going to be organizing this, but there will be more, as I'm partway through another segment, but there's not going to be a plot, per se, so there might be chapters or there might just be a series....Preferences?