Donate at least US$10 and you'll become a member of the OTW! Receive a special member icon, member gifts, vote in OTW elections, and choose from new thank-you gifts. We've raised US$117,837.00 so far, surpassing our goal of US$40,000. Thank you!

a warmth so bright and fierce

Revolution dawns, and second year dawns with it. The events of both will change the wizarding world forever. Tangled in magics old, bound, and forgotten, Harry and those he loves chase the hope of a better world.

Chapter 1: The Last Day of Summer

Here we are!! The fic which was supposed to be the last, until two more wrote themselves. Note that this work has a work skin of its very own! In later chapters, you will only be able to see my formatting if you are viewing work skins. (Not telling what it’s for yet ;) )

I know everyone was very excited for the summer, however … that’s just not how the story goes : ) Trust me, there will be plenty of mer, centaur, and acromantulae content as the ball starts rolling.

Also, to answer a repeated query in the comments: you can assume Harry evaded the professors for summer break in the exact same way as winter break.

“I don’t want the summer to end,” Harry groaned. “How am I supposed to do—essays, and exams, and, and—”

Araeo gave a bark of laughter.

“It is!” Harry said furiously, tossing a pillow at him. “Anyone who can’t figure out how to get around the castle after dark doesn’t deserve to! It’s not very hard; I was doing it when I was eight!”

“I think my mother would say those were extenuating circumstances,” laughed Araeo. “Anyway, it’s your move, or are you conceding?”

“I’m not!” Harry shouted, furiously staring at his hand of cards. With a victorious smirk, he slapped down a green prophet on top of Araeo’s silver archer. Araeo pouted at him, and Harry stuck his tongue out. “I’m just saying,” Harry whined, “that there’s already so much to do. You know, you’ve been as busy as I have this summer—imagine doing school on top of that!”

“I have been,” said Araeo dryly. “Would you like to swap? I’ll go to wizard school and you can learn the seven centaur arts as well as take lessons in clan leadership?”

Araeo handed him the pillow his uncle had made Harry to keep in Araeo’s room for sleepovers. Harry promptly threw it at him. Spluttering, Araeo dropped his cards, seized the pillow, and began hitting Harry over the head with it. Harry fumbled for Araeo’s stuffed owl and gave as good as he got.

“Stop moaning!” Araeo said, putting one hand on Harry’s forehead to keep him at bay. He had an unfair height advantage. Harry swung wildly with the owl, growling in frustration. “At least you have friends at school! I don’t have any peers at my lessons, I just have adults who think they know better than me.”

“I have those too!” Harry protested. “And besides, I have to lie to my friends all the time.”

Araeo released him. Harry flopped down on Araeo’s bed, clutching the owl to his chest and resting his chin on top of it.

“Snakeheart?” Araeo asked, kneeling beside him. “You never said anything about that.”

“’Cause I wasn’t thinking about it,” Harry muttered.

“It doesn’t make them any less your friends,” Araeo said. “You have deep secrets, yes. But you share other parts of yourself.”

“It feels like it makes them less, to me,” Harry said. “When I have to lie to them, it’s like I’m saying they don’t deserve the truth.”

Araeo was silent for a moment. He slid his hand into Harry’s atop the stuffed owl, and their heartbeats aligned with a ba-dump. Harry sat there and listened to it while Araeo thought.

“Don’t lie. Don’t tell them everything, necessarily, but when you cannot disclose the truth, simply … say so. If they are your friends, they will respect your privacy.”

Harry thought about that for a moment. “Alright,” he said finally. “Yeah. I’ll do that.”

“Yeah?” Harry looked up, only to be hit in the face by his pillow so hard feathers burst out.

Five minutes later, Araeo’s bed lay in pieces across the room, his floor was covered in tiny beads, the table was on its side, and only a miracle of elf magic had stopped the glass in the vanity from smashing. Harry hung upside down from the woven branches of the ceiling, shrieking and swinging the owl as Araeo attempted to tickle him so hard he puked.

Harry let out one more wheeze of teary laughter and then bottled it up at once, looking with wide eyes towards the door. Araeo put his hands behind his back, taking a quick step away from Harry.

“Having fun?” Nayla asked dryly from the doorway. She had thick black hair braided regally atop her head, shining brown skin, and around her bare shoulders was draped a shawl covered in small glass discs that reflected the thin light streaming in between the cracks in the woven ceiling.

“Yes, mother,” said Araeo sheepishly. “Your mantle—do we have guests?”

Nayla nodded. “The steward has come. I assured him my heir would be quick to come welcome him, as befitting his station … but now, I can only be glad I did not invite him into my home.”

Araeo tried to flatten the side of his braid, which Harry had yanked out. Harry swung softly from the ceiling, his face going red from the blood rush.

The corner of Nayla’s mouth twitched upwards. “I shall tell him you will be there to greet him shortly, with Snakeheart.” 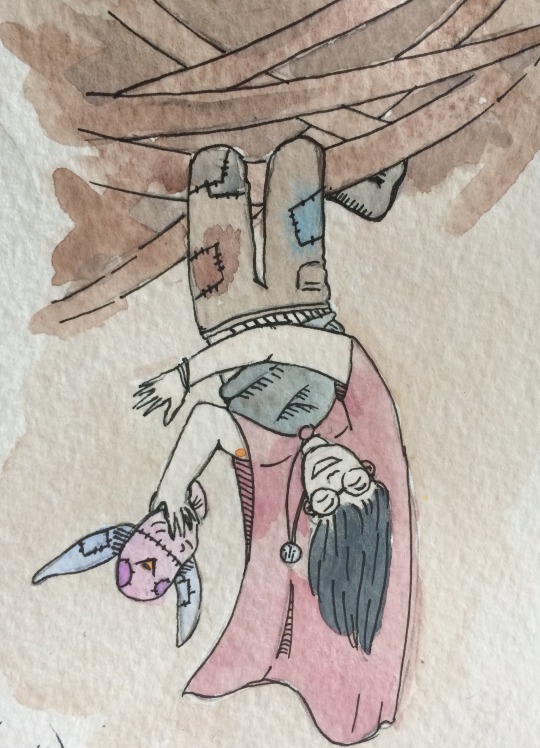 Their allotted short while passed, and Harry and Araeo stepped from the bower with hair hastily re-braided and formal attire in place. In Harry’s case, this simply meant his Stargazer pendant prominently displayed. In Araeo’s, it meant he wore a mantle similar to Nayla’s, but with small glass beads instead of discs.

They found Hagrid standing by the low blue fire, speaking with Nayla and Firenze. He looked to Harry and Araeo as they approached, and gave a short bow to Araeo, one hand on his chin, which Araeo mimicked. He gave Harry the exact same greeting, only he followed it up with a tight hug.

“Tha’s alright,” Hagrid said, casting a glance up to the noon sun. “We have time. Heir Stargazer, I trust you’re takin’ care of this fellow, eh?”

Araeo nodded solemnly. “He does need a lot of taking care of, Steward Hagrid.”

Harry scowled at him, but Hagrid laughed.

“Come, let us have a drink together before we speak of more serious matters,” Nayla said. “Shall we sit?”

“Oh, don’t bother on my behalf,” Hagrid said, but Nayla waved him off and guided them over to a low log a bit away from the fire. Harry and Hagrid sat on it, and the three centaurs went through the production of sitting.

“I’ve told you, Steward Hagrid,” said Firenze, pouring bright purple wine into a glass flute, “you may call me Firenze.”

Hagrid took the glass carefully. “An’ I’ve told you to call me Rubeus, Advisor Stargazer. An’ here we still are.”

Nayla smiled, passing Araeo and Harry cups of wine. “One day we shall see who is bravest between you,” she said. “I trust you are well, Steward Hagrid?”

“Oh, well enough, well enough,” said Hagrid. “Busy summer. Busy summer for us all, I know we’re all aware.” He tipped his glass of wine to Harry. “We’re all jus’ tryin’ to be prepared as we can be, when the call comes. Thanks to this one here. I keep sayin’ to meself, how is it he has so many people wrapped around his finger? Then I see him again, and I remember.”

Harry wrinkled his nose at him, then stopped with a glance to Nayla.

“It doesn’t always take a Seer to feel the winds of change,” said Nayla. “And change so rarely comes uncontested.” She drained her glass. “Very well. It seems serious matters have come no matter our wish for delay. Araeo, Snakeheart, Firenze, you may go. The Steward and I must speak.”

They rose, and Firenze ushered them back into the bower. Harry cast one glance back, and saw Hagrid and Nayla bent in conversation, their faces grim.

“I know I said it before,” Harry said, clutching Araeo’s hand, “but I really don’t want summer to end!”

Araeo gazed up at the deepening sky. “Too late for that, my heart.”

Harry bit his lip and tried not to cry. He knew he should let go of Araeo’s hand—they would just make each other feel worse and worse as their emotions bled together. But he had spent two wonderful weeks in the centaur village, and he could not bear leaving, he could not bear it.

Araeo pried his fingers from Harry’s. Ka-bum fell their hearts, but an iota of clarity returned to Harry all the same. He sighed and leaned his forehead against Araeo’s chest. “I will see you soon,” he said, saying them hard as if he could force them to be true.

“You will see me soon,” soothed Araeo, though he didn’t do a good job of it, as he was equally distraught. “You are needed there, Snakeheart. Trust me.”

He forced himself not to look at Araeo again as he hurried to Hagrid’s side, dressed now in his school robes, band necklace tucked away. He put his head down and walked beside the steward in silence, for a long time, until he could taste their passage out of centaur territory.

Harry hiccuped and wiped his eyes with the sleeve of his robe.

“Ah, c’mere.” Hagrid stopped and enveloped him in a hug. “You’re so young, Harry, to be dealin’ with these things. Politics and nations and treaties and trade … you know that, don’ you? You know you have to be a kid, too?”

Harry nodded miserably against Hagrid’s coat. “Can’t I do that and not go to school?” he whispered.

“I daresay you could,” mused Hagrid. “Who’d stop you? Is that what you’re gonna do?”

Hagrid guided him to a walk again, keeping one huge arm around his shoulders. “And why not? What’s waitin’ for you that makes you wanna go back?”

Harry bit his lip. “My friends.”

“That sounds wonderful,” Hagrid said. “What else are you excited abou’?”

Harry kicked at a stone. “Classes.”

Harry nodded. “I like them. Except History of Magic.”

Harry thought about it. He was starting to get a little excited. “The food. The beds. The library. Oh—the shower!”

“There you go, that’s the back-to-school spirit,” chuckled Hagrid. “Now hop to, Harry. You have a train to catch.”