Krampus Claus is Coming to Town

Napoleon has been missing for days inside a chamber of horrors. Illya's only found corpses up to the point when he discovers a very different sort of victim. Written for Spook Me 2020 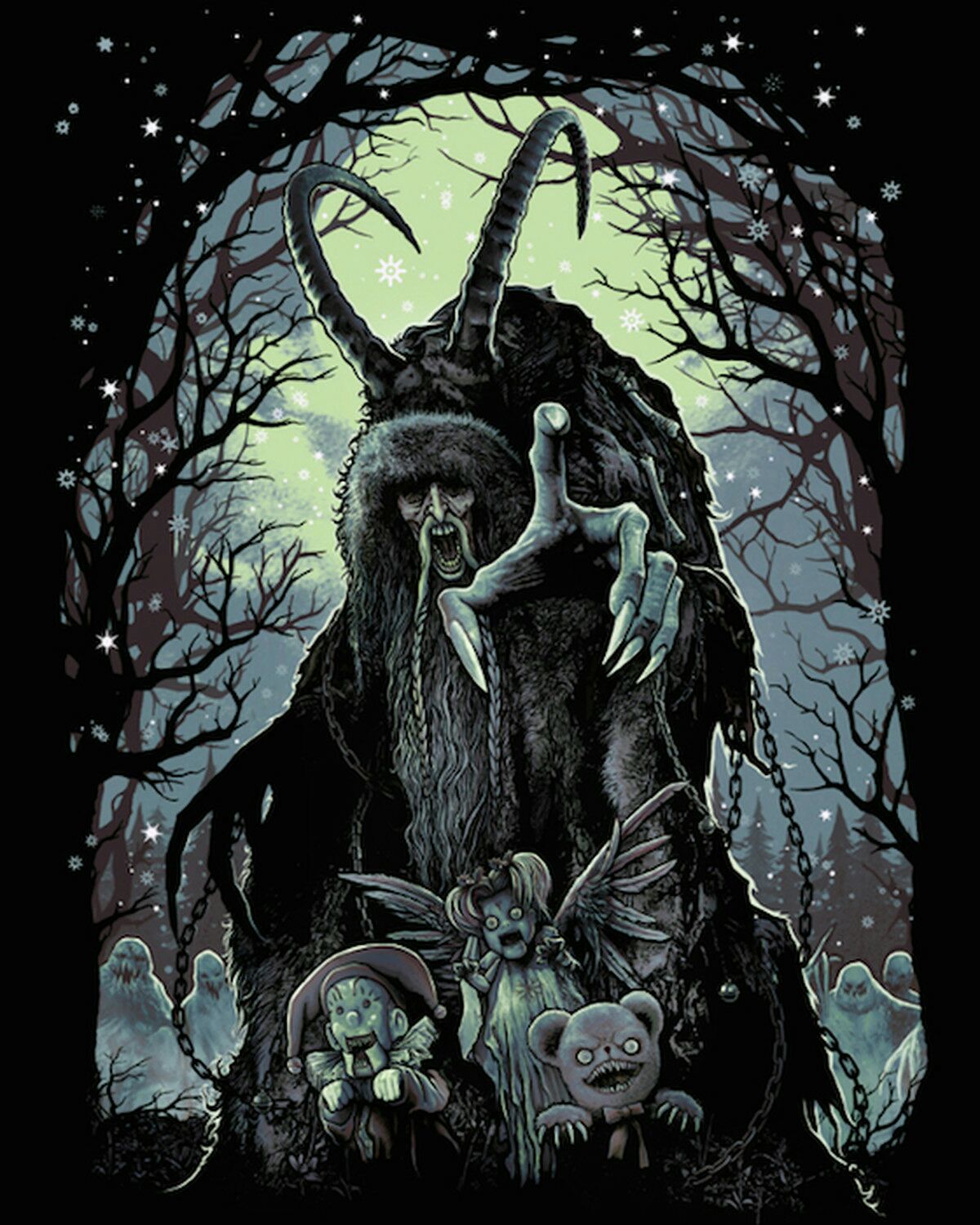 Illya Kuryakin was mad.  No, he was beyond mad.  He was furious. Illya couldn’t remember the last time he was this angry and never at his partner.  Yet, never had his partner displayed such a flagrant disregard for danger.

Illya had gone through every curse word in every language he knew and had started again.

“Why won’t he listen?” Illya muttered to no one.  The dank glistening walls of the stone corridor faintly echoed his words back to him.  The torchlight danced as it cracked in its sconces.   “I told him to stay close.  I told him not to wander off.  What does he do?  Goes chasing the first skirt that catches his eye.”  Illya stopped and glared at the darkness.  That had been three days ago.   “She isn’t defecting, blockhead.  She’s the brains behind all of this!”

That moment had been an uncomfortable revelation when they captured a half crazed THRUSH agent.  She had been working under THRUSH guidance, but then something happened and she’d gone rogue, killing anyone who defied her and terrifying the rest into submission.

She’d found something, trapped something, the THRUSH agent babbled on about a monster that would destroy them all.

His voice reverberated back to him and Illya tried to calm down.  The castle was a maze, worse, a maze of a maze.  He’d twisted and turned so many times, he didn’t even know which way was out anymore and he never got lost.  It would do to completely lose control.

A soft, muffled sound caught his attention and he stopped.  “Napoleon?” he repeated.

The noise was and wasn’t like Napoleon and he feared what he might find.  Illya had seen some pretty gruesome things locked in the various cells and chambers down here.  Gross experiment of a most twisted mind.

The head THRUSH liked to experiment and the results had turned Illya’s stomach.  He thought Mengele was bad.  This THRUSH could have taught him tricks and she still would have had a bagful left over.

Illya had already taken matters into his own hands and killed a couple of the most extreme examples genetic tampering he’d ever seen.  Thankfully the few people he stumbled across were already long dead.

The moan again, part animal, part something else.  Illya steeled himself against what he might find and prayed that wherever Napoleon was, he was safe from harm and not behind the door he faced.  He tried to peer in, but could see nothing.  His small flashlight was but a speck against the darkness inside.

He used a bit of C-4 in the lock and it popped the ancient metal with little effort.  Illya pushed the door open and paused, letting his eyes adjust to the lower light of the cell.  He let the flashlight play against the walls and finally settled on a figure huddled against the brickwork.  The cloak it wore was shredded and stained

“Are you hurt?  What can I do to help?”  Illya moved closer, but remained wary.  Pain often stole the mind and he didn’t want to become a statistic.

“Release me, please.” The voice was rough from misuse.  A long-fingered hand appeared from the scraps of fabric and Illya caught his breath as it reached out to him.   In the dim light, they looked more like talons.  God knows how long he’d been down here.  “Please, let me go.”

The head swiveled and Illya caught sight of horns, long and curved.  “My god, what did they do to you?”  Illya packed C-4 around the chain anchors.  “Turn away – now!”  There was a sudden flash and Illya wished he taken his own advice.

Even with his eyes covered, he was momentarily blinded.  He stumbled back against the opposite wall, blinked furiously.

There was the sound of rattling chains, a roar and a sense of abrupt movement.  The figure that stood before him loomed twice his height.  Illya started to wonder if perhaps this was to be the last of the Kuryakin line.  “You’re free.  Go, run far from here.”

For a long moment, the world stopped and the only sound was his breath and the dripping of water.

His chin was caught and his face studied, then it was released and Illya crumbled to the floor.  He felt as if he’d been through the wringer.

“You are good.  He is not for us,” the figure said and moved slowly away.  That’s when Illya saw smaller creature darting in and out of the edged of the robe.  Their chains jingled and rattled as they moved.  “What do you seek here?”

“My partner, my friend.  He is lost, taken by the woman and I am worried about him,” Illya murmured and the figure again turned just as Illya’s vision returned.  The outlined framed in the door was one created in nightmares of his youth. Illya’s mouth moved for a moment, then his voice found the words.  “Krampus?”

The head bobbed.  “She thought she could keep Christmas from coming. Your wish is so.”  And it was gone.  For a long moment, Illya leaned back against the wall and tried to make sense out of what had happened.  Or if anything had happened at all.

After half a lifetime, he pushed off the wall and that’s when he saw the bodies neatly stacked against the wall.  The features were shriveled and looked chewed upon.  Illya remembered the sharp little teeth of Krampus’s helpers.  All of them were dressed in THRUSH jumpsuits and Illya caught his breath.  She’d fed her own men to Krampus.  Bad, he’d taken them and survived.

Illya stumbled back into the corridor and took a few shaky steps.  He felt exhausted and knew that he’d been very close to something unspeakably evil.

Then, a whisper of fresh air kissed his cheek and he turned his head in that direction. He half groped, half run following it.  No more doors hiding horrors, no voices pleading for help, instead Illya found himself outside in the cold and biting rain.

His communicator beeped and he jumped in spite of himself.  “Channel D is open.”

“Thank God.  We’ve been trying to reach you.  Illya, we have Napoleon.”

“He’s okay.  Dirty, tired and hungry, but that’s about it.  I don’t really understand what happened.  One minute we were reading a map and the next minute it was standing there.”

“Yeah.  The guy… thing… it dropped its robe and there was Napoleon.   It said, this is good.  This is for him.”  Then it just walked away and its clothes sort of morphed.  Illya… it was wearing a Santa suit and dragging a sack.”

Illya glanced at his watch as the calendar clicked over to October 31st.  “I guess he is going to be Santa for Halloween. “Take care of Napoleon.  I’ll be there as soon as I can.  Kuryakin out.”  Illya tucked the communicator away and spun at the sound of a branch breaking.

Krampus stood there, his leer the closest thing he had for a smile.

“He is.  He makes bad decisions, but he is very good.”

Krampus nodded and moved away, dragging the bag behind him.  Illya watched and then took a deep breath.  “I guess Christmas is coming a little early this year.”

And he started back to camp and his partner.