Worth a Thousand Words

Spike has held onto the drawing for years, but he doesn't really know why. 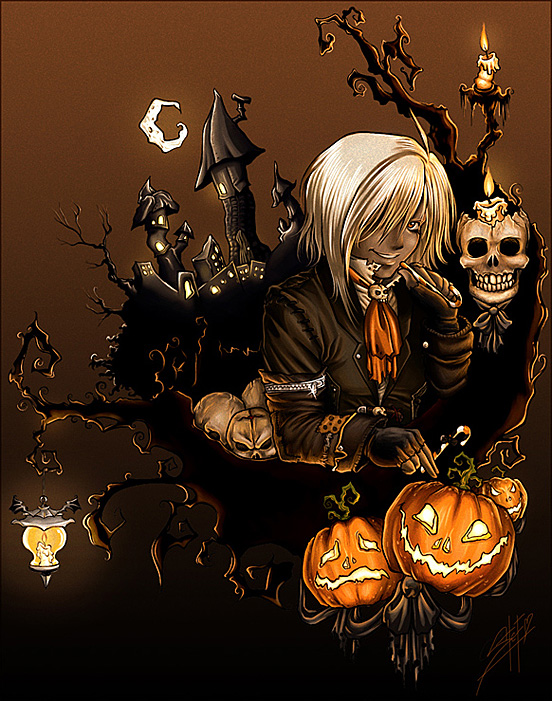 Buffy looked down at the nearly empty bowl of candy and sighed.  When she was a little kid, she never worried about the candy running out, or the cost of chocolate.  Now she worried about that, the phones, the electricity, it never seemed to end.  Even with Willow and Tara kicking in, everything was still tight.

“Looks like we’re almost out of stuff.”  She carried the bowl into the kitchen and nearly spun on her heel as she caught the two witches in an intimate embrace.  “Sorry.”

Buffy stopped and waved her away.   “It’s not a problem, guys.”

“You’re okay with us around Dawnie?” Willow bit her bottom lip.  “I mean, we wouldn’t do, well…”

“What?  That she see two people in love expressing it?  Yeah, that scares me oodles. Even more than the vampires and ghouls and demons that she sees on a regular basis.”   Buffy dumped the rest of the chocolate into the bowl and looked over her shoulder as the doorbell rang.  “It’s your lucky night.”

Buffy carried her armful back to the front door and opened it.  Instead of a pack of trick-or-treaters, a thin black-clad figure stood there.

“Sorry, luv.  It’s my one night to relax.  I don’t envision it kick slayer arse.”

“When have you ever kicked my arse… ass?”

“First time for everything.”  He held up an armful of items.  “Look!  I brought… things.  Invite me in?”

“Come in, Spike.”  Buffy indicated the living room with a jerk of her head and he happily stepped in.  Behind him was a group of kids.

“Your costumes are great!”  She doled out the candy and the kids raced off.  Behind them was another group, although they were older and not in costumes.  “And what are you supposed to be?” she asked the nearest, a teenage boy.

“Whatever it takes to get the candy.”  He looked her up and down, his expression almost leering.  That changed to open eyed terror when Spike, in full game face, appeared behind Buffy.  The trio screamed and ran.

Buffy spun and glared at the vampire.  “Put it away, Spike.”

“I didn’t like the way he was looking at you.”

“Well, I did.”  Buffy stopped and regarded her image in the mirror.  “It’s nice to think a younger man might be interested.”

“An older man is.”  He ran a finger down her arm.  “Very interested,” he murmured.

“You’re not a man, Spike.”  Buffy put the bowl back down on the hall table, pausing to grab a piece of red licorice before she headed back into the living room.  “So, what did you bring?”  She plopped down on the couch and unwrapped the candy.

“Some movies, some books.”  Spike sat beside her and started to spread things out.  A piece of paper was caught by a random gust of air and fluttered free.

“What’s that?”  Buffy reached for it, but Spike snatched it up.

“Sorry, that was a mistake.  Nothing to see.”

“Spike, you know I can take that away from you, right?”

The vampire sighed and held it up.  It was a caricature of a blond man, wearing old fashioned clothes and surrounded by pumpkins, skulls and a distant creepy looking castle.  She held out a hand, but Spike shook his head.  “Nope, not happening.  I’ll burn it first.”

“Spike, you are the most melodramatic vampire I’ve ever known.  You’re even worse than Angel.”

“I’ll wash your mouth out!” Spike snapped.  “A friend of mine did it.”

“Wait, that’s you?”  Buffy studied the image.  “It doesn’t look anything like you.”

“It’s a caricature.  It’s not supposed to.”  Spike studied the drawing.  “He wanted to be an artist more than anything else in the world.”

“Well, I say he succeeded.”

“Sure it was.”  Spike touched the image and sighed.  “Sure miss him, though.  That boy could party!  I miss him.”

“But not enough to track him down again.”

“I tried, Slayer, but it wasn’t as easy as it is now.  I talked with some of his friends.  They said he got into a bad crowd and made some less-than-savory deals.”

“That should put him in your league, Mr. Less-Than-Savory Vampire.”

“You’d think, but that path led nowhere.”  He held up a video.  “Nightmare Before Christmas?”

“Oh, yes, please.”  Buffy jumped up and ran to the hall.  She flipped off the porch light, grabbed the bowl of candy and shouted.  “Will, Tara. Feel like a movie?”

While Spike fought with the player, Buffy reclaimed her spot of the couch.  The illustration beckoned to her and she reached for it.

At that moment, Willow and Tara walked, hand-in-hand, into the living room and Willow gasped!

“Buffy, NO!”  The Slayer froze in mid motion.  Spike leapt to his feet, ready to do battle.  “Don’t touch it!”

Immediately, Buffy pulled her hand back.

“What’s wrong, Red?”  Spike took a deep breath.  “I thought we were being attacked.”

“Course it is.  Look!”  He thrust it towards Willow and she held up an arm over her eyes.

“What?  What the bloody hell is an image vampire?”

“I don’t know how they are formed.”

“I do.”  Giles appeared in the doorway.  “Spike, put it down carefully and everyone come to me.  Now!”

At the authoritative snap in his voice, the young women scampered to his side while Spike set the paper down on the coffee table and walked slowly over to join them.

“Giles?” Buffy asked, all the while fighting the urge to run back in and grab the paper.  “What are you talking about?”

“It’s a very rare sort of sorcery.  The image is alive, it draws life from a living host.  Rather like a succubae.”

“Exactly.  It drains the host, like any vampire, and then sleeps.  When it awakes, it must find a new host to feed upon.”  Giles grabbed Spike’s shirtfront.  “What’s your part in the, Spike?”

“Wot?  It’s a picture a friend drew of me.  What happens if them vampires don’t feed proper like?”

“What happens to you?”

“It ain’t pretty.  Skin and bones, it is

Unnoticed, Buffy took an involuntary step towards the drawing.  It was calling to her and just a look wouldn’t hurt.

She didn’t get the chance.  Spike jerked himself free of the Watcher’s grasp and threw himself at the Slayer.  He caught her just as she was about to touch the paper and tackled her to the ground.  She was so distracted, he easily pinned her.

“Not likely, Buffy.”  Spike looked over his shoulder.  “Giles, what do I do?”

“The picture, Spike, burn it.”

Instantly a blazing fire roared to life in the fireplace and Willow grinned, pleased with herself.  Spike nodded and jumped to his feet.  He grabbed the sheet and carried it to the flames.  The paper twisted and struggled in his grasp.  Spike looked down at it and his eyes widened, then he crumpled it up and tossed it onto the flames.

“The billede vampry automatically goes after the strongest person in the room, in this case Buffy.”

“Why not Spike?” Tara asked.  “That was very good, Willow,” she whispered in the redhead’s ear.

“Spike is a vampire, he would be unaffected by it.”

“On my mother’s grave, I didn’t know anything about it.  I just held onto it because I liked it.”

“In this case, it’s not his fault.  The carriers are often unaware of the billede vampry.  It casts some sort of glamour over them.”  Giles watched the paper curl and blacken.  “Sort of a reverse Portrait of Dorian Grey, in effect.”

“That explains it,” Spike said, quietly.

“Explains what?”  Willow sat down beside him and rested a hand on his arm.

“Just before I burned it, I looked and it was the image of an old man.”