It's the scary place on Earth, at least if you are a kid and believe such things. Sadly, there is more to monsters than just stories. 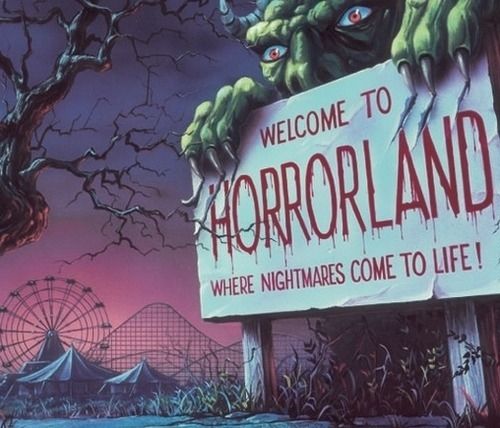 The music alone was enough to make Irina want to run from the room screaming.  While she didn’t mind certain parts of the holiday, she was definitely NOT a fan of the scary part of Halloween.

“Turn it up,” Alex demanded.  Not only was he very much into horror, being a boy of ten, but he was also into anything that annoyed, scared or bothered his little sister.

“No!” Irina clamped her hands over her ears as Peter complied.  He felt duty bound to obey his older sibling’s instructions.

For her part, Inessa, Peter’s twin, just stared at the screen.  At six, she was just starting to figure Halloween out.  It was loud and colorful, advertising Horrorland – Where Nightmares Come to Life.

“We gotta go!” Alex jumped to his feet and headed for the kitchen, nearly bowling over his grandfather as he did.

“Whoa, son, hold your horses.”  Napoleon caught the boy in a rough embrace.  To do anything else would insult the boy’s sense of manliness.  “Where are you headed in such a hurry?”

Alex was so excited that his face was flushed and his breath was coming in short pants.  “I want Mom to take us to Horrorland!  I have to go.”

“Don’t let him, Grampy!  It’s scary!”  Irina was on his heels, looking as nervous as her brother was excited.  “I think it’s evil,” she continued whispering.

The front door opened and a small whirlwind of leaves preceded their father, Leon.  Like his father, he was dark haired and had a ready smile on his lips and in his eyes.  He scooped up his daughter.

“Daddy, please say no.  It’s terrifying.”  She pointed toward the family room.

“What’s in there that’s scary besides the obstacle course of your toys?  He set her down and hefted his youngest daughter into the air.  She giggled and drooled.  He made a face as a trickle of warm spit hit his face.  “Thanks for the shower, Ginny.”  He put her down and she toddled away.  “So what are we talking about?”

“Horrorland.  It’s the most funniest place ever!”  Alex was nearly dancing in place and the twins joined him, although neither of them really understood as they shouted.

“No, Daddy!”  Irina had tears running down her face now.  “Don’t!”  She spun and ran off, returning a moment later in her mother’s arms.

“All right, everyone into the family room!”

Illya Kuryakin entered just then.  “Evening, all.”  He jerked his head to one side and Napoleon nodded.  “Why don’t we join you in a minute?”

They waited as the family moved away and Illya struggled out of his overcoat.  He ran a hand through his hair and smiled tiredly.  “We lost three Section Two men today.”

“They aren’t dead; they vanished.  We literally lost them.  I want to increase your protection detail.”

“Until you aren’t.  Napoleon, you aren‘t a Section Two anymore.”

“I can still protect myself.”

“I’d be happier if someone else was doing it.”  He smiled as Napoleon brushed back a strand of hair.  “Please?”

“I can live with that.  He should be Section Two anyway.  Thank you.”

“Thank you.”  Voices were steadily rising from the family room and Napoleon turned his attention there.  “Okay, I guess this is our entrance cue.”

“I don’t wanna, Mommy!”  Irina was on the verge of a panic attack.  She looked over and then rushed into her maternal grandfather’s arms, nearly knocking him over.  “Poppy, don’t make me.”

Napoleon grabbed Illya’s shoulder and he flashed a smile of thanks at him.  “Irina, you need to calm down.”

“She needs to grow a pair!” Alex shouted.  At the dumbfounded expressions on adults’ faces, he added.  “I’m not exactly sure what it means, but I heard it on a movie.”

“We are going to have to start reviewing your movie watching, my boy,” Napoleon said as he sat, remember at the last instance to check for a toy.  “Let’s keep that expression at a minimum for now.  What is all of this about?”

Four of the children started talking at once while Ginny happily played with her blocks, gnawing on first one, then another.  She glanced over at them, but that was all.

“Apparently there is a carnival coming to town and calling itself Horrorland.  Alex wants to go.  Irina, not as much.”

“Not at all,” she muttered, looking out from the security of her grandfather’s arms.  Illya stroked her head.

“If we don’t all go, then it’s not fun,” Alex argued, grabbing his grandfather’s hand. “It’s where your nightmares come to life.  I’m old enough!”

“Not my idea of a good time,” Leon murmured to his wife and she nodded.

“Turn down the volume and the attitude, Alex.  You want to be grownup, then you have to make grown up decisions.  This is an either/or situation.”

“Will they have candy and stuff at the carnival?”

“Then Horrorland it is.  I’m too old for that trick-or-treat stuff anyhow.”

Napoleon wasn’t as convinced.  Up until the last minute, as his brother and sisters were getting dressed, Napoleon thought the boy might waffle, but he didn’t.

Now he sat in the backseat, barely able to contain himself.  “Come on, guys!  It’s already dark and this is the last night they’re open.”

“Are you sure you are going to be okay?” Leon asked his wife as she settled Ginny in the wagon.

“Here.  Hang onto this, Ginny.” She offered her a plastic pumpkin.

“’Tay.”  Ginny embraced as best she could with one arm.  Her short arm caught the strap and held that instead.

“That’s my goofy girl,” Leon said, bending to give her a kiss on the top of her Goofy hat. ”Are you going to be okay?”

“We’ll be fine.  Dad’s here and that will keep the evening short.  Irina is happy with just the neighborhood and the twins… well, it’s all magic to them. Plus no nap, so they will conk out early.  You and Dad be good.  No overly scary rides.  I don’t want you having to sleep with your father tonight.”

Leon laughed at that.

“Daaaad???”  Alex was hanging out the window.

“All right, I’m coming.”  Leon kissed his wife and waved good bye.  He watched them head for the first house before getting into the car.

“Scale it back, Alex, or we’ll put a stop to this evening before we start.”

“I’m sorry.” The apology was mumbled and not very heartfelt.  Alex had crossed his arms and was staring out the window.

“Always trust those feelings, son.  They never let me down.”

“I would if I knew what they were for. I hope everyone will be okay.”

“Illya’s with them.  They are safer than if they were tucked into their beds.  Now, let’s have a men’s night out.

They were able to park fairly close to the entrance of the carnival.  The rides were going, but there seemed to be a lack of attendees.

“Alex, are you sure about the dates?”

“Yeah, I got a flyer.” He passed a much folded sheet of paper to Napoleon.

“Maybe they didn’t get much of a draw and closed early.”  At his son’s devastated look, Leon turned off the engine and undid his seat belt.  “However, we’ve come all this way, we might as well check it out.”

They approached the ticket booth, but it was closed.  A sign hung in the window.  “Come on in!  The screams are on us tonight.”  The clown face that decorated the side of the sign was positively terrifying.

“Oh, boy!”  Alex started in and Leon snapped his fingers.  The boy froze.

“Dad, are you… well dressed tonight?”

Napoleon patted the area near his left shoulder.  “Very well dressed.  You?”

“Yup.  I’d hate for anyone to be cold.”  He motioned his son over.  “Okay, here is the drill, Alex.  You do not get out of our sight.  There is something odd going on.”

“Alex, where are all the people?”

“Ah, we’re late and maybe they all left already.”

“Alex, my boy, have you been talking to anyone about tonight?”

“The Chamber of Horrors.”

“Why doesn’t that surprise me,” Leon muttered.  He pulled out his communicator and started to talk quickly into it.

Napoleon knelt and drew the boy closer.  “Alex, if anything bad happens tonight, do you remember what to do in case of birds?”

“Good boy.”  Napoleon straightened and looked at his son.  “Ready?”

“With every fiber of my being.”

Illya looked up over the top of his glasses as Napoleon entered the room.  “Finally calm down?”  He closed his book and smiled slightly as Napoleon sat down on the corner of the bed.

“Sort of.  A THRUSH satrap… imagine me taking one out at my age.”  Napoleon patted his hair and sighed.  “Nice to know I could still do it, although I didn’t quite see the night ending up with me knee deep in mud and in a gun battle.”

“You and Leon were just lucky Alex was on the ball.  If he hadn’t noticed one of his friends as a prop in the maze, you might not have been so fortunate.”

“I know. We did everything right and it still took someone seeing outside the box to save us.”

“He’s got all the makings of a good UNCLE agent… when he’s old enough.”

“Grampy?”  Alex was standing at the bedroom door, looking little and not very brave.

“But it almost wasn’t.  Just because I was so stupid and selfish and stupid.”

“You already sad that and you’re not.  You’re a kid, Alex.  You can’t fault yourself for acting like one.”  He handed Alex a tissue.  “Blow.”

The boy complied.  “Grampy, I was really, really scared.”

“But when it mattered, you behaved exactly as you should.  If you hadn’t hidden the way you did, those Section Two agents never would have found us.”

“I have found in these situations that it’s better not to borrow trouble by wondering such things.”  He gave the boy one last hug and held him out at arm’s length.  “Now, why don’t you try and get some sleep tonight?”

Napoleon escorted him to the stairs and watched him leave before locking the door behind him.   He returned to Illya’s bedside.

“And the beat goes on,” he murmured.

“You gave your grandson good advice.  Perhaps you should take it too and get some rest.”  At the sigh, he continued, “Or I suppose you could sleep in here with me tonight.”

“I thought you’d never ask.”  Napoleon kicked off his slippers and tossed his robe over a nearby chair.  Illya chuckled as he pulled off his glasses and put his book down.  “I’m going to keep my socks on, though.  For some reason, my feet are cold tonight.”  He clicked off the lights.

From the dark, Illya muttered. “Just don’t steal all the covers tonight.”

“’Kay.”  He found the lump that was his partner and cuddled up against him, safe from ghoulies and ghosties, and long-leggity beasties, and all things that go bump in the night