It's that time! It's been 70 days since the visit to Karuizawa and Izuna is sick of being fat. Just a one-shot.

Yay! Babies! Not the human kind! Welcome the newest arrivals to the Tokyo Yaoiverse!

Greetings, everyone! How was your summer?

Sorry this one is so short. I wrote it as the beginning of the next story but it didn't really fit in with the rest so I decided to put it up by itself. The next is in progress, I swear! I've started a new job and I'm getting used to it slowly (my feet hurt!) so I'm adjusting to a new writing schedule. I'll be slower to produce, but no plans to stop. Hope you're all doing well!

Three sets of eyes flew open in the darkness and three men sat bolt upright in their beds – no clue as to why, brains not-quite functioning. Scattered across town, three other people stirred in their sleep but did not wake, their dreams turning strange.

“Hah?” Ugetsu rubbed at eyes and blinked, not that it helped him see any better in the dark.

Beside him, Aki flopped back down, groaning. “Bassui's gone mad,” he mumbled.

“Babies...? Oh, shit! You mean Izuna? Kai, I think we have to go.” Ugetsu fumbled for the lamp in the wrong place – they were in Aki's studio, not his. Bassui, usually calm and composed and quiet, was scampering around the room, a rust and black blur of agitated energy.

Aki turned over and buried his face in a pillow when the light came on. “Don't wanna.”

A deep breath. Aki turned his head just enough for Ugetsu to see one sleep-bleary eye. “Not fair. Too cute.”

Grinning, Ugetsu grabbed his arm and dragged him off to the bathroom.

When they arrived at the Kanazuki mansion, Aki parked behind a familiar car – Shima's. “Did he spend the night?” Ugetsu wondered.

No. Shima got out of his car when they did, looking equally half-asleep and unlike his usual, tidy self. He still had bedhead, not having taken the time for a shower. He also seemed to have gotten dressed in the dark, wearing green shorts, an orange t-shirt, and two different socks.

“Don't say 'good' like this makes any sense.” Aki still wasn't happy about being woken up in the middle of the night. “Won't it take hours?”

“Who knows?” Shima snapped back. “C'mon. Reiko says we should use the servant's entrance.” He stalked off toward the stately home.

Ooh, the imperturbable Shima is finally flustered? Ugetsu hid a snicker as they followed him.

All three sped up, Bassui grabbing onto Ugetsu's shirt to keep from falling off as they jogged around the corner to a plain door on the back of the huge home. Hesitating for a moment with his hand hovering over the doorknob, Shima traded glances with the other two, then steeled himself to open it.

I hope we aren't arrested for breaking and entering. But no, there was a maid waiting just inside to escort them up to Reiko's room. Ugetsu assumed she was a maid – dressed in pajamas and a robe it was hard to be sure. She didn't speak, just turned and led the way up to Reiko's room. After a soft knock on the door, she opened it and then walked off - leaving them to return to her bed, Ugetsu assumed.

“Oh, good! You're here!” Reiko launched herself into Shima's arms. Bassui launched himself off Ugetsu's shoulders and wiggled through a small gap where the closet door had been left ajar. “She wanted him with her, though she refused to call for him until the very last minute! I'm sorry you all had to wake up in the middle of the night.”

Ugetsu wondered how they were supposed to feel about this situation. Bassui hadn't shown much interest in Izuna since they returned from the ryokan. He had settled into life with Ugetsu and Aki with calm certainty, instructing Ugetsu on what supplies he required (not many) and food (mushrooms), and mostly did his own thing. That consisted of riding on Ugetsu's shoulder and observing human behavior.

Bassui found humans curious and confusing and sometimes amusing or annoying. He would comment or ask questions that had Ugetsu laughing out loud, often earning him strange looks in public. Bassui could do something to make people not see him – Ugetsu didn't understand how – and that meant Ugetsu appeared to be alone and acting strangely. Unable to break the habit of speaking out loud, he took to wearing a Bluetooth earpiece so people would think he was on the phone with someone. For the most part, the kudagitsune was merely a comforting presence, quiet and detached. Tonight's excitement was a radical shift.

Reiko didn't appear worried in any way. Ugetsu had no experience with birth. In television shows and movies, everyone remotely connected to the expectant parents paced, worried, anxiously smoked, hopped up at any sign that something might be going wrong, and pestered the hospital staff.

“It's not a problem,” Aki told her, despite being the one who complained about the rude awakening. “Do we need to do anything? Is it all going...normally?”

“I have no idea,” Reiko shrugged, releasing her hold on Shima and taking his hand instead. “From what I can sense, she's fine. There is some instinctual need for privacy and for her mate to stand guard. Aside from that, I don't think there is pain – her body is just...doing its thing. I've been ordered to stay out of the room and to have food ready for her once it's over.”

She gestured at them to sit, on the bed or two squishy chairs in the corner or at her desk. “It may be a while before we know anything. If you want, I can show you to a guest room and you can sleep. There's some coffee - help yourself.” She pointed out a silver carafe on a tray, with fancy cups, cream, sugar, and little spoons.

“We're awake now, might as well wait for the good news,” Ugetsu told her, pouring himself a cup. “Bassui said there will be three babies. Are they aware already? Like, are we going to hear them speaking right away?”

“From what I gather, they won't be able to communicate in words until they are maybe two months old. Feelings might leak out but they shouldn't have much range. It's hard to be sure. I read as much as I could find about normal foxes, but kudagitsune aren't normal and Izuna's never had a litter so she doesn't know either.”

They settled in to wait.

Reiko grabbed her phone and a second tray holding a small bowl of water and one of wasabi peas – Izuna's favorite. The guys wanted badly to go in with her but had the feeling that wouldn't be tolerated. Reiko crept in, dropped off the tray, and snapped a few pictures before coming back out. She showed them.

Reiko giggled. “They won't be cute for a few days. Then they'll grow some fur and be fuzzy. They're supposed to be a sort of dark gray color until they get bigger, then they'll get their adult colors. Like kittens, they start off with their eyes closed, they're deaf, and they can only wiggle on their bellies. Izuna has to be with them all the time because they can't stay warm by themselves.”

::Bassui can take my place for a short time. I won't relieve myself in the house.::

::Ha! You lie. Newborns are ugly, I know. Don't worry – our babies will be most excellent handsome and beautiful!::

::And intelligent,:: Bassui added. ::Gifted. Ugetsu-sama, Kai-sama, I will stay here for some time. You may go home. Thank you.::

The humans grinned at each other. They were sort-of parents! Godparents? Uncles and Aunties? Whatever. Babies! Ugly-cute babies! Yay!

A brief, but joyful, moment for our Yaoiverse! More to come! 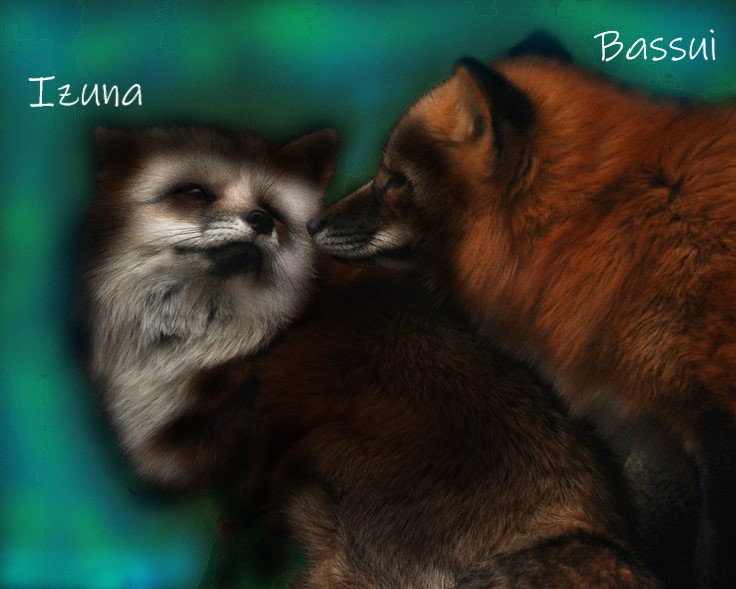 *Goanzan... - Congratulations on the birth of your child.