"Strewn around them were masses of sheets and paper. Essek's chalkboard was so covered it was more diagram, writing, and emphatic-chalk-taps than free space. Ink dotted across his hands like black constellations. He was sure some splashed onto his clothes and furniture with their increased fervour as the hours went on. His hair was long mussed up with the amount of times his hands had traversed through it. He was dishevelled, messy, untidied and completely unfit for public appearance like this. And he felt sated. "

He felt physically drained, thoroughly worn out, and satisfied.

Laying on the floor of his study, hands clasped loosely over his torso, he let the exhilaration and excitement of the last few hours wash over him. Beside him, ankles crossed and one arm slung above his head, Caleb lay equally as flushed and eyes still burning bright as they read the ceiling back and forth.

Strewn around them were masses of sheets and paper. Essek's chalkboard was so covered it was more diagram, writing, and emphatic-chalk-taps than free space. Ink dotted across his hands like black constellations. He was sure some splashed onto his clothes and furniture with their increased fervour as the hours went on.  His hair was long mussed up with the amount of times his hands had traversed through it. He was dishevelled, messy, untidied and completely unfit for public appearance like this. And he felt sated.

Their research had been frenzied and ... and fulfilling. Judging by the breathing that Caleb was still attempting to regulate, he was feeling it too. He was smiling widely, eyes flickering back and forth as his thoughts still seemed to be active and frenetic. Essek understands that feeling all too well as he bathes in his own academic delirium.

Essek tilts his head a little, his own breathing still coming down from its high, to view the man having internal conversation with himself. He watches on as Caleb’s eyes would widen and settle, mouth twitch with a wider smile or go to purse as though about to counter himself out loud.

What they had done tonight was incredible. Caleb was incredible. For all he had several fewer decades of study, his penchant for picking up concepts, breaking them apart and piecing them back together in an image of full understanding was astounding. Essek loved to watch every time he explained something new or expand on a theory or postulate on what-ifs and then-buts, as Caleb would start to mentally absorb every word and systematically configure his own image.

Essek loved it even more when Caleb would start explaining it back to him, desperate to fully comprehend this new knowledge... this fresh insight and idea. Fixated and enraptured, Essek would silently nod and gesture for continuation as Caleb then added his own takes and direction to whatever he had just learned. He would paint a picture so explicitly vivid, that Essek himself felt he’d only been viewing certain concepts in monotone colour- and then Caleb would hand Essek a metaphorical paintbrush and together they would … create.

And that’s what happened tonight. What started out as an innocent question at a Xhorhaus dinner soon turned into a late-night deep dive into old texts and tomes, pulling hypotheses and essays to call upon for fact-checking and evidence-gathering. While they didn’t have a definitive answer to the initial question after several hours of this, the leaps and bounds they had made tonight had been momentous and solid as a starting block.

Finally, however, their adrenaline had peaked and come crashing down in the wee hours. Essek glanced to his timepiece across the room and found it covered by a long-discarded mantle and cloak. Thrown haphazardly over a chair was Caleb’s coat- his scarf left at the Xhorhaus in their impatience to get to Essek’s well-stocked library after dinner. Now his tunic was unbuttoned at the collar, sleeves rolled up and face rosey with emotion.

It was as Essek was admiring Caleb’s profile that the man himself turned to connect their gazes, and Essek felt pinned beneath those bright eyes.

“This was-” he started, Zemnian accent stronger than ever as he still was feeling that joy and energy that came from such an involved research bout. “That was magnificent!” Essek started as Caleb leaned up on his elbows and then angled towards him to only rest on one, almost leaning into his space. “The possibilities this could unlock- the… the progress and doors this would open if we are correct! We still have so far to go, ja, but even- even just this as a start…”   The free hand was now waving almost wildly, gesturing to the organised mess and chaos that was their process and developments. The sconces - emitting a pale blue light- simply highlighted how warm and fiery this man was both in spirit and physicality. “Essek-” and Essek feels his eyes snap to Caleb’s from where they had wondered, following that chalk-covered, calloused hand. The way Caleb always said his name, with such… reverence and… and care wrapped up in that accent...“You are truly magnificent. Your mind is - it - I -” Essek watches on almost religiously as this man, usually so eloquent and collected, struggles for the right words. “You challenge me, you teach me, and understand me." He pauses, as though considering his next words carefully. "We are brilliant together.”

Essek stills as a hot hand burns through his forearm sleeve where it lightly touches above the wrist. His own hands, still clasped, tighten at the contact- but not in fear, no. Judging by the swooping deep in his stomach it is most definitely not fear. He feels his gaze flicker, but then holds it for he is no coward. Not in this moment, not after tonight. Not after, well, everything they'd been through together. The energy around them was always electric, but here and now it was more palpable and charged than ever before, like a storm waiting to happen. He sees Caleb watching him for any sign of a crossed boundary, and Essek is determined not to give him even an inch of misinterpreted hesitance.

“Yes,” and his voice is a little breathless and weak from overuse. He clears his throat, resolute in his feelings. “Well, when one’s… partner ... “ and he uses the word in a deliberately ambiguous fashion pleased to hear that Caleb’s breath catches at the word. “-Is as studious and assiduous as yourself, it makes for a very, hmm, pleasant experience.” The hand that had been resting lightly now settles a little more weight, content that it’s welcome where it is. Essek does not protest.

“Well my partner is a meticulous and rather singular man. It would be remiss of me to not give him my undivided attention at all times.” The only way Essek notices that Caleb’s face moves a fraction closer to his is because his silhouette eclipses a sconce on the far wall behind him. Right now all Essek can truly feel is the soft carpet at his back, and the hand effectively pinning him to it with a light touch. The return of the word ‘partner’ felt so much more weighted hearing it back at him than when he first used it and he’s almost certain Caleb can feel Essek’s pulse pick up with the thumb slowly rubbing back and forth along Essek’s wrist.

Whether it was the intellectual intoxication they both imbibed upon together this evening, or the incrementally decreasing distance between them he doesn’t know, but Essek feels emboldened by the moment to engage rather entirely in what was happening here. The voice that leaves his lips next is low and deep, rumbling up from the chest beneath the hands and taking on tones so alluring and suggestive he surprises even himself.

“Mister Widogast if I didn’t know any better I would say that you were attempting to flatter me up in an attempt to gain access to my spellbooks more frequently.” Caleb’s hair- now fully freed from the tail it had been tied in a few hours prior- drapes around Essek’s face, almost curtaining them away from the outside world. Caleb’s mouth twitches from grin to smirk and Essek has front row viewing of it all.

“I would never attempt such a… deceptive ploy. Certainly not on you, Shadowhand Thelyss.” The hand that had been rubbing a thumb over Essek’s pulse slid up to interrupt Essek’s clasp. Essek let the fingers intertwine through his before replacing his top hand over, trapping it there. "You are most definitely deserving of every compliment I give you," he finishes.

“I probably shouldn’t, but I find I believe you." He chuckles low and quiet. "Who knows what guarded mysteries and research you could do away with once you’re done with me? Starting off with the secrets of Dunamancy-”

“I could never be done with you.” Caleb is so close now as he whispers, Essek feels himself going a little cross-eyed attempting to maintain their gaze.

“Essek.” Their noses are touching.

“Essek .” Their breath was intermingled, Caleb leaned his forehead to Essek’s own.

“And of course there’s the extrapolation of-” Every quiet word he was now giving almost ghosted along Caleb’s lips, so close where they.

“Essek Thelyss if you finish that sentence then I’m going to have no choice but to kiss you.”

Essek stopped mid-ramble with a hitched breath. He felt Caleb with his entire being despite so few points of them touching. For as charged as the moment was, Caleb was being very cautious and open with his intentions, and Essek - well, Essek would very much like to take him up that.

Essek gets no further as he finds out that Caleb Widogast is very much indeed a man of his word. 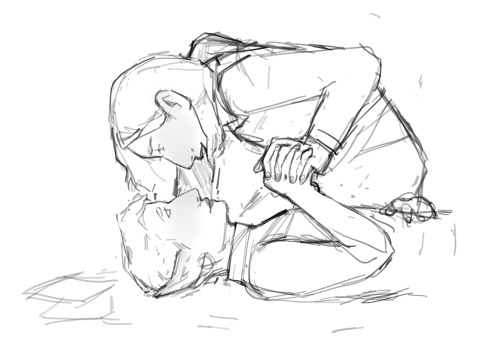