John has had Sherrinford the Doll for years. And when he meets Sherlock Holmes, who is a literal life-sized version of said doll, he becomes attached. Quickly.

John has a doll that looks like Sherlock. He meets Sherlock several years later.

I don’t own Sherlock.

I have no beta. 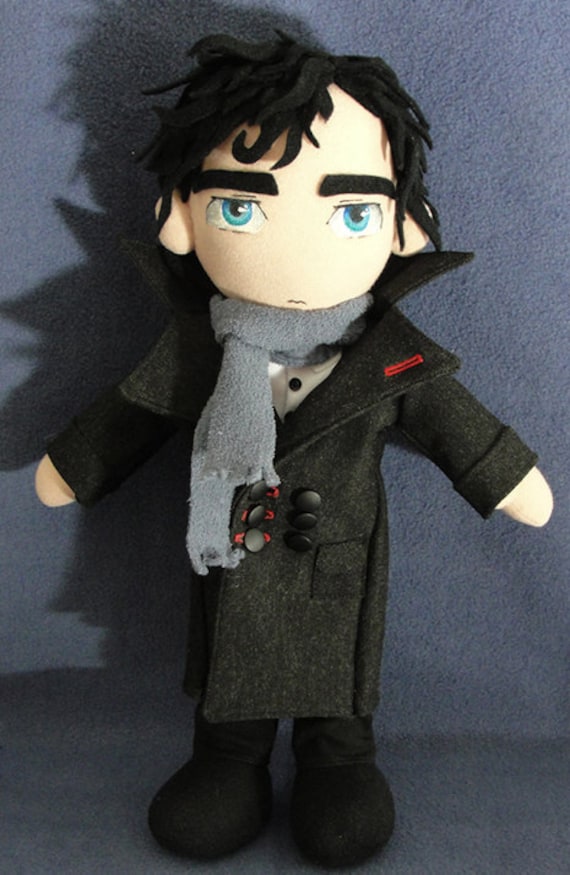 John did not know where it came from, but it was there one day, sitting on his bed. It was eighteen inches of pure cute! He couldn't help but cuddle it.

Men did not play with dolls but technically, John wasn't playing with it. He just cuddled it when he slept. And he cuddled it for years, managing to keep it in perfect condition.

From a miniature Belstaff coat, to the little blue muffler around the neck and the dark curls against a soft angular face. Collar pulled up high and a black suit that stood out against the pale skin and made the heterochromatic blue/green/gold eyes stand out. It was the cutest doll he had ever seen. Even if it was a boy doll. The tag had a small ‘S’ on it, written in black Sharpie. He named it Sherrinford.

Still, little John Watson had loved it all through his childhood, his teen years and even into his adult years. He kept in his bag when in the military, not willing to like the guys know about it. But he was comforted to know that it was there if he needed it.

When he was invalided home after being shot by a sniper, it even helped his nightmares. They still came yes, but they weren’t as bad as they could be. He knew this because he lost it one night and the nightmares he had that night were horrible. And once the doll was back in his possession, his dreamers were no longer haunted.

And then he met him!

He was like the doll, but as a real person! When he put that long Belstaff coat on and the muffler, those eyes, that skin and those ridiculous curls. John had shivered.

He wasn't gay. He couldn’t be gay. He’d never been interested in men before and he didn't feel like it now of all times. But how could he not be excited at seeing a real life Sherrinford standing only three feet away.

And the man was offering a flat-share, which was exactly what he needed! But John had to play it cool. It would look wrong if he was so excited to share an apartment with a person he’d never met.

He made a comment about not knowing each other and the man - Sherlock Holmes, he later found out - began to deduce him right then and there. And then John was hooked.

From meeting the man, to planning out a payment schedule with Mrs. Hudson of Baker Street, to assisting in some sort of case, losing use of his cane because his limp no longer bothered him, chasing a cab through the city, getting kidnapped by the brother of his life sized Sherrinford look alike and accepting money from him in order to report about Sherlock’s health and overall well being - using said money for rent purposes of course - and killing a very bad cabbie all for his new flatmate. One day with the man was amazing.

Months passed and John still marveled over how there could be a real Sherrinford, though they were named different.

Even two years after meeting and living with the man, John was still fixated on him. Sherlock was just amazing. And every night, he still slept with Sherrinford under his pillow. In case Sherlock possibly entered the room without permission and caught sight of him.

And it was during April, a month or so after the whole Irene Adler incident, that it happened.

Sherlock had rushed off to go mess with Mycroft, who had done something offending. John had no inclination as to what it was because Sherlock considered his brother breathing to be offensive enough.

It was then that he decided to wash Sherrinford and fix his buttons and such.

John had sat on the comfortable sofa for two hours, working meticulously to make sure that Sherrinford was in the best possible condition he could be in. The door was closed, which would give him a chance to stash the doll should he hear Sherlock approaching.

Sherlock was like a feline, slinking around with his lithe build, easily slipping in and out of someone’s vision without issue. He was silent and learned how to ascend the old rickety staircase of 221B without making a sound. He even managed to open the door quietly. But he didn’t take ten years to do so. he just opened it and didn’t try to take precautions. The door was just silent for him. If John had done it, the door would be creaking and whining in protest.

So when Sherlock's voice rang through the flat saying, “John, what are you doing?” the doctor jumped about a foot off the sofa and hugged the doll close to his chest. God, he’d look like such a creep if Sherlock saw Sherrinford.

“Stitching up an old gift of mine. Keeping it clean and in good shape. You know.”

Sherlock’s eyes narrowed, “You don’t want me to see it. Why?”

“It’s an old stuffed animal and I don’t want you to see it. Ugh, the embarrassment!” John whined, looking at the window as he tried to will the flush away.

John’s breathing halted and he held Sherrinford even closer.

“You’re positively burning, John. And your breathing has gone erratic, your pulse if three times faster than normal.”

Sherlock’s amazing hands reach out and begin to pull John’s one arm away. And the the other, until Sherrinford falls to John’s lap.

Sherlock looks down and his eyes widen.

John stutters, “I swear I’m not a creep! I've had him since I was eight!”

Sherlock looked up and they stared at one another for a few minute.

“You aren't lying, your pulse has returned to normal. You’re confident in your words, completely. How came you by this?”

John snorted for a second, flashing back to when he’d watched The Hobbit the other day. Thorin Oakenshield had said the same to Gandalf. But Sherlock was no Thorin, oh no. He was more of a Smaug. Anyway, back onto what was actually going on.

“I went into my room one day to find him on my bed. Harry forgot my birthday and tried to make up for it with him. I never asked where she got him, I was too excited to come home to find another gift on my bed. His name is Sherrinford and you can’t imagine how shocked I was to meet you and to see the resemblance.”

“Inside the coat, is there a tag with a very sloppily written capital ‘S’ that almost looks like a number 8, with a small smiley face to the bottom right?”

John’s brow cocked and he nodded very slowly. “I knew you were good Sherlock, but how the bloody hell did you get that from only looking at it once? You can’t even see it!”

“I…that was mine,” Sherlock mumbled.

“It was mine,” he answered louder.

Sherlock looked away, cheeks lighting up. “Mummy gave him to me when I was younger. I always was dressed to the nines as a child and she had him specially commissioned for me. I am odd. People don’t like to be around me. As a result of my differences, I had no companions except my experiments and the skull. He was my Mini-Me. The only person who could understand me, was me.”

John looked down at the doll resting on his lap. “Are you sure?”

“Yes. After a particularly bad day when I was seven, in which Mycroft lost many waistcoats in a failed experiment, he took the doll and I haven’t seen him since. I find it ironic that you named him Sherrinford, because that was what mummy wanted to name me.”

John’s breath caught in his throat.

Sherlock’s hand reached out, touching John’s cheek gently. “You've taken such good care of him too. Like how you take care of me.”

Sherlock was sort of smiling. It wasn't a smirk but those perfect lips weren't all the way up yet. They had a bit to go. But it was still an expression that he reserved for John and John only.

“And you’ll keep him with you always, looking after him and fixing him when he needed help. Just like you do with me. We both get the same treatment from you, you see.”

Sherlock picked up the doll and held him out to John for a second, before pushing the doll's face against John’s own.

“Sherrinford has displayed his affection and as I said, what is done to one, must be done to the other.”

And then Sherlock closed the distance between them and John forgot how to breath.

Looking back on it, John couldn't really pin who was to thank for the beginning of their relationship.

Sherlock had admitted to being too frightened of John’s action - because he ‘wasn't gay’ - to ever ask him out. And then he saw Sherrinford and heard John’s story and his fortitude was strengthened.

Was it Mycroft or Harry that deserved the thanks for helping their relationship begin via doll? Sherlock wasn't too keen on giving his big brother credit and not that he didn't like her or anything, but John didn't want Harry to have credit either.

They looked up at the same time, from their ravioli and smiled.

Sitting in John’s lap, was Sherrinford, joining in on the festivities.

Who said that grown ups can’t have dolls? And again, it wasn't like he was playing with him.

Sherrinford played a big part in their relationship. And how many people could say that a doll brought them together?

Check out my other Sherlock stories. *Need to Know Basis* Johnlock, BAMFJohn. Telepathic John. *According to You, I Am Beautiful* Johnlock(sort of) Sherlock reflects on John. FLUFFY!

How was it? Let me know, please?

The pic of the doll isn't mine. I found it after I wrote the story, though. I thought it sort of fit.