This is an AU crossover story between La Femme Nikita and Outlander. James Fraser and Claire Beauchamp are operatives that work for a covert secret organisation called Section One. Their terrorist target is Sun Yee Lok, the hard to pin down leader of the Rising Dragons’ Triad that is responsible for several deaths and other atrocities in Hong Kong. In their attempt to capture him and eliminate the triad for good, they come across other triad members and pursue these people in the hope that they will lead them to their leader.

DISCLAIMER: This is a modern AU crossover story with Outlander and La Femme Nikita. LFN and its characters do not belong to me nor do those from Outlander. This is a work of fiction and as such is a fabricated tale created in my imagination. There may be some suggestive (S) chapters, scenes of a violent (V) and or sexual nature (NSFW) throughout the course of this story. 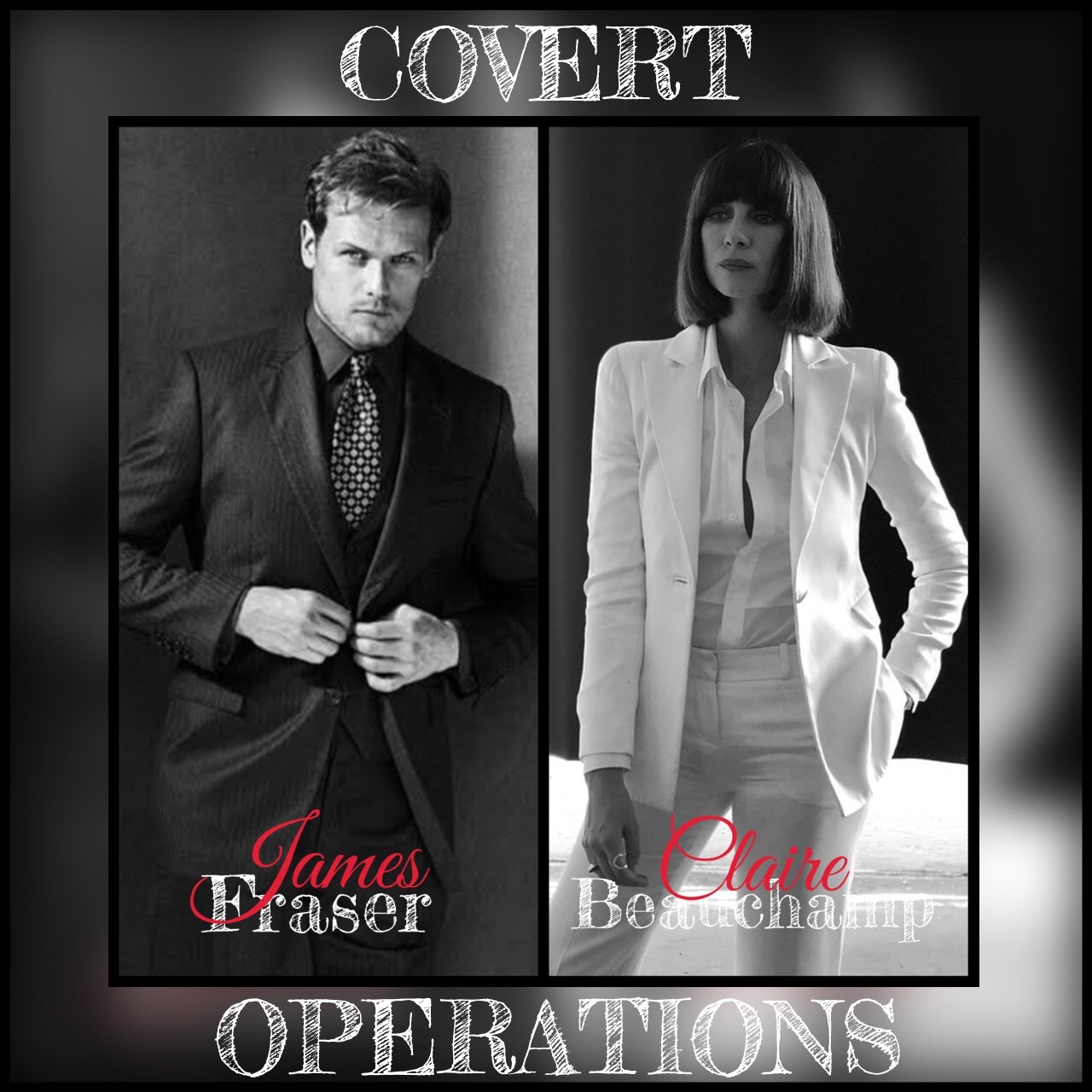 The Dragon rises up his back

In daylight near and far

He soars at night with deadly eye

Beneath the moon and star

Be cautious of its ruthless ways

This enigma to the night

For the Dragon bears upon his wings

A chilling tale of fright

“Death with Honour” its way of life

With motto “Strength by Dare”

Once you yield fear nought … but

When it seeks you, beware!

In the early hours of the morning Section One operative Claire Beauchamp was in a sound but restless sleep. Her mind, however, was filled with the images of her partner and mentor Jamie Fraser and herself on last night’s mission together.

Waiting in a darkened city street outside the nightclub, we wait to seize the two heroin dealers and lovers whom we are to replace on an upcoming mission. They are to be our point of entry to our target’s party circle and his dealings with Red Cell. I keep glancing into the alleyway to see if they are coming … but Jamie is somewhat distracted … which is most unusual for him.

I have been a little flippant with him tonight joking about our so-called “date” and the setting where it was happening and I feel like teasing him just a bit more. “You always take me to such nice places, James Fraser.”

He keeps looking at me as if he wants to commit me to memory … as if he can’t get enough of me. I watch his eyes as they caress my features over and over. Moving right into my space … Jamie overwhelms me. I can barely breathe let alone think properly. He is so close to my face that I can taste his lips and feel the soft, warm caress of his words.

Laying in her bed, Claire smiled languorously in her dream-induced sleep as Jamie Fraser’s words and actions washed over her.

Leaning into me while we are waiting for the targets to appear, the soft timbre of Jamie’s voice affects my senses.

“Where are you staying tonight?”

His words sent a tingle running down her spine and she recalled the soft whisper of his breath near her cheek as they were uttered. Unconsciously Claire sighed in her sleep as her body had seemed to gravitate to the gorgeous man who was her enigmatic partner. Jamie’s words had sent her heart fluttering as to the underlying innuendo of those five softly spoken words against her cheek. It had been dark in the alleyway but she wondered had he been able to see the vein throb in her neck or see that her face was a little flushed or that her eyes had slightly glazed over with a hopeful but questioning look?

Her eyelids twitched and a little grin crossed her mouth as if she was remembering the satisfied reply of her answer.

“They’ve assigned me to temporary quarters not far from my little apartment.”

I look disdainfully around the alleyway that we are waiting in observing the background of noisy traffic, rubbish bins and drunks walking by. Taking one look at the setting and then looking at James Fraser, I can’t help but laugh at the absurdity of our surroundings. Catching his gaze as he studies me I reply light heartedly, “I’ve got to say, my new pad’s almost as nice as this.”

Jamie smiles at me with this quirky little grin that I just love when the sides of his mouth bow in a conspiratorial way. “For how long?” He inquires hopefully.

I know that thought processes are obviously churning over in Jamie’s head. I know those blank stares of his. They infuriate me at times but they speak so much without words. He replies somewhat tongue in cheek, but I’m sure he means every word he says. I can see it in his eyes. They sparkle with mischief.

“You could stay with me.”

Jamie strokes my shoulders leisurely with his gentle but strong hands. Caressing my body through my clothes … it feels as if I have nothing on at all. The heat of his touch is scorching me. It burns right to the core of my being. I’m on fire for more than just my partner’s potent caresses. I close my eyes … I can’t look at him for fear I will be roasted alive. I feel the heat shoot through my body at his nearness as my nerve endings tingle with desire.

Tossing and turning Claire called out again to Jamie in her sleep. Groaning incoherently, his name echoed in her room as she writhed in her bed feeling his tender touch on her body. Jamie’s caresses never failed to set off alarm bells ringing inside her. Even the mere thought of this man touching her ignited her senses making Claire long for something real from him … something that was a little bit more intense … something that would leave her smouldering with unbridled want and need.

“Are you asking me to move in with you?”

I say to him … but in my mind I relay my real thoughts and answer, “Oh my God! I hope that IS what he is asking …YES! YES! YES! Please…” I yearn to say instead.

He is so hard to read at times but the next words out of his mouth in that sexy Scottish brogue nearly render me speechless. “You’d be more comfortable.”

I can hardly believe what I am hearing from James Fraser. I feel faint. Oh, how I have longed to hear such words uttered from his mouth … but I can’t help but wonder how serious Jamie is about his proposition so I ask.

“Well, is this for two weeks or were you thinking of something a little more … permanent?”

Before I have barley finished speaking his eyes seize mine. I cannot breathe … I’m riveted. His eyes are mesmerizing. Trapping me in his sights, Jamie’s eyes show he means every word. I stand transfixed before him … lost to him.

We are so close that every time we talk, we are almost kissing. In fact his lips do brush mine but it is not enough … not nearly enough. However much I love his soft caresses … I want him to deepen the connection and ravish me like he’d done once before. I want to go off like a firecracker … just like I did on that special night on the boat in Lyons. Primal … feral … wanton. If only he would take me … here … now … in the alleyway … I really don’t care … I just want him to kiss me passionately, deeply … and senseless.

Although my mind wants more, my lips are content to feel Jamie’s lips gently caress mine as each wonderful word leaves his mouth with sincerity and intent. His eyes … the windows to his soul are laid bare for me to see the depth of his feelings. I know what he wants to do because I want the same thing. But I lower my gaze to his fingertips lightly caressing my lips then gaze back up into his eyes saying, “And how is it, that you think that we’re going to get away with that?”

“Aarrgghhhh!” she mumbled incoherently as the incessant ringing eventually woke her up.

Grunting, Claire rubbed her eyes, then reaching out her hand searched for where she had left the phone. Moaning loudly into her darkened bedroom she picked it up reluctantly from the bedside table. With eyes still closed and her body tingling from the visions of her pleasurable dream Claire lay back on her bed and reluctantly answered in a husky voice, “Yeah …?”

Surprisingly enough the main focus of her vivid dream was the very person on the other end of the line.

The sexy timbre of Jamie’s voice caressed Claire’s ear as if a kiss had been planted there instead. In her dream, he had just been about to kiss her … but here he was using her code name and asking her to come into Section. Begrudgingly glancing at the clock illuminating the room in the darkness, Claire focused on the early hour of the day. Although this was not unusual procedure for Section One, Claire hated these early morning wake up calls, but Jamie had called her in as a matter of urgency for a new mission was being profiled.

Turning off her cell phone, Claire moaned into her pillow.