The Avatar and the Fire Nations Princess

What if Korra was kidnapped and raised in a slave compound while the war is raging. One day she is sent to the Fire Nations Palace as a gift. Where she has to serve as the personal slave for Princess Azula.

A what-if scenario in which Korra was enslaved since she was a kid. The story ran parallel with the canon story line, but with some twisted and changes and in along the way.

A what-if scenario in which Korra was enslaved since she was a kid. The story ran parallel with the canon story line, but with some twisted and changes and in along the way. 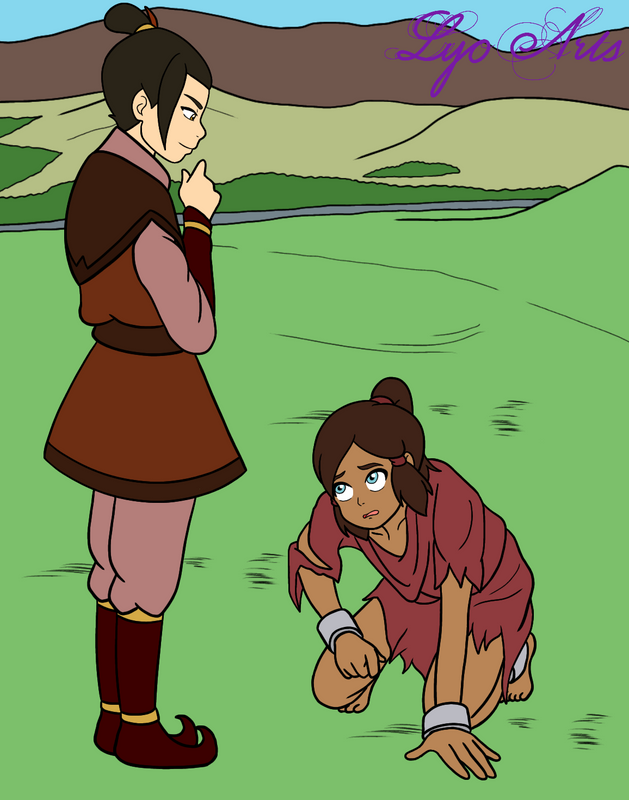 It was the morning of Azulas 8 birthday, on the steps to the Fire Nation Palace. Prince Ozai, his wife Princess Ursa and his two children Azula and her slightly older brother Zuko waiting patiently for an important delivery. Azula jumped up and down with excitement, because today she gets what she wanted for a very long time. Something that she has wanted for almost 3 years. Today she gets her own slave.

"Are they there yet?" Asked Azula, full of anticipation.

"It won't be too long Azula," her mother replied ruefully.

"I still think it's a stupid idea to get a slave." Zuko replies regretfully.

"Nobody asked for your opinion!" Shouted his father Ozai, whereupon Zuko flinched away. Zuko looked at the floor and said nothing.

“I definitely want a slave who is smaller than me, maybe the same age. But I still don't know what to do with him first? "Said Azula with a tense expression on her face." Maybe I'll give him a punch in the stomach as greeting so he knows who has the upper hand. Or maybe I let him carry me around and every time he gets too slow I light his butt on. Or better yet, I burn his feet, and every time they heal I burn them again. "While Azula explains her plan, what she will do first, she lets out a crazy laugh.

Zuko couldn't help himself and took a step to the side, away from his sister.

Meanwhile, an armored carriage with half a dozen guards around it drove down the path to the foot of the steps and stopped a few yards in front of the feets from the royal family.

A man in his early thirties got out of the carriage wearing a well-groomed suit.

The man bowed to the future Fire Lord. "Greetings Prince Ozai, my name is Hiroshi Sato, I am the leader of our slave compound. We are here to bring you your slave. ”Hiroshi said it in a submissive tone.

Ozai greeted him incidentally and replied "Now that the formalities are behind us, I would like to choose a slave."

Hiroshi bows and gave the order to the nearest guard to line up the slaves from the carriage. The guard bows and does as he was told.

The guard pounded loudly on the armored carriages door, then a guard from the other side of the carriage opened the door and pulled on a long chain. The chain ran around the waist of the tethered slaves. It were six childrens from the Water tribe all tied to the chain.

Every child wore dirty and battered rags as clothing, but what stood out were the heavy handcuffs that every child wears on their hands and feet. The children are between 8 and 10 years old. All children look emaciated and fragile and look like they have not slept in at least 3 days.

Each of these children had a blank expression on their faces, as if they had given up hope.

The sight of the children breaks Ursa’s heart, she couldn't stand the sight and apologized with the excuse, “I'm really sorry, but I forgot something in our room.” Ursa bowed and went up the stairs to the Palace.

Azula anxiously asked her father "can I choose one now?!"

Ozai smiled maliciously and replied, "Feel free to choose anyone you like." Azula jumped up.

She ran over to the tightly chained children and examined each one.

Zuko looked away in disgust.

The first child Azula examined was a somewhat longer boy with black unkempt hair, probably 10 years old, but not clearly recognizable due to malnutrition. Azula judges "too big." And went to the next one.

The second child was a 9 year old girl with a bandaged leg. She was the same size as Azula, with long brown hair tied in a braid. Azula judges "too crippled."

The third and fourth children are identical twins, a boy and a girl, both believed to be 8 years old with short tousled hair. Both slightly smaller than Azula. Azula smiled slyly and started looking at both of them until the twins had tasks and looked away fearfully. Azula grinned maliciously and said, "I would like to pick you two, but unfortunately Dad only allowed me one slave." So she went to the next child.

The fifth child was a 10 year old girl with hair so long that it covered more than half of her face. The girl looked fragile and was a little taller than Azula, but that wasn't what Azula bothered "why should I choose a slave if I can't even see the pain in his expression?" After the verdict, she turns to the last child .

When her gaze met the eyes of the last girl in line, the sight almost took her breath away. It was a girl with light blue eyes a few inches shorter than Azula, and her long brown hair was tied in three braids, one on each side of her face and a wolf tail on the back of her head. Azula thought it looked kind of cool, but she would never say that out loud.

Azulas examines her from head to toe, apart from the fact that the girl looked a bit scared she had nothing to complain about. Azula circles the girl and asks her maliciously "What's your name slave?"

After Azula heard the sound of her voice, she didn't know why, but she knew she must have Korra.

"Congratulations Korra," as Azula says these words, she turns away and proclaims, "You will be my personal slave."

"B-but..." Korra stammered before she got a hard hit in the stomach that almost stole her breathe, followed by a hard slap to the face whereupon Korra fell to the ground.

"First rule," began Azula, raising a finger, "you only talk when I allow you."

Korra held her cheek while trying to hold back her tears and nodded. She now moved to a sitting position, whereupon she gets a painful kick in the back. Korra lets a scream of pain out.

“The second rule,” Azula now holds up two fingers, “you don't sit down until I allow you. So get up. "

Korra stands on shaky legs, her eyes down and nodded.

Azula turns to her father with a smile, points her finger at a trembling Korra and says "I want this one."

"Very well, daughter," answered Ozai, while he turned to Hiroshi, "we have made our decision."

Hiroshi orders his men to loosen Korra's chains from the other children.

The guards ignored the supplications, removed the chain that was attached to the other children and put a collar around Korra's neck and a leash on the collar, which they in turn gave to Hiroshi.

Hiroshi Sato hands the leash that are attached to Korra's neck to Prinz Ozai, he bows and says, "I'm glad you made your choice, please consider this slave as a token of my honor." Whereupon Ozai nodded and accepted the leash.

He in turn handed the leash over to his daughter and says "here your slave don't break it on your first day." Whereupon Korra swallowed fearfully and Azula accepted the leash with a smile.

"We will have so much fun together,” smiled Azula evilly. Korra only shivered at this thought, as a Fire Nation princess barely older than herself, takes her life into her hands.

Meanwhile, Zuko couldn't help but take a closer look at the new slave. His first thought was 'I'm already sorry for her' on closer inspection, his second thought was 'She's pretty cute'.

The guards meanwhile load the carriage with the rest of the children.

Before Hiroshi got into the carriage, he gave Ozai one last piece of advice, "I'm sure you already know that, but don't forget that even though she's still a child, she's still a waterbender."

Ozai, arrogant as he is, laughs with contempt at this warning and says "I don't think we will have a problem with it, especially when my daughter is through with this worthless scrap." With this sentence Ozai turned around and left up to the palace steps.

Hiroshi Sato bowed one last time and drove away with his carriage and his men.

Before Korra could even take a single step, she fell face first and with Azula still on her back, on the floor.

Azula, although unscathed, angrily pulls the leash and chokes Korra. "You worthless, stupid thing, I didn't even have you for 1 minute and I almost died because of you."

Korra, with her hands on the collar, is desperately trying to get air in her lungs. She tries hard to apologize "I-I... I... I'm s... sorry..." This statement only made Azula angrier so much that she pulled the leash even harder, so that Korras Back arched backwards.

Azula leaned down to Korras ear and whispered "You broke the first rule again," Korra couldn't concentrate on the threat because she hardly gets any air in her system. "Take this as your first warning, if you disappoint me or break the rules again I will kill you." With this warning she let go of the leash abruptly so that Korra falls back to the ground. Korra wasted no time and inhaled greedily the air.

Azula smiled happily and said in an almost sugar-sweet voice "Now that you have understood the rules, get up and take me to my room."

Before Korra could ask where Azula's room was, she remembered the first rule, with this knowledge, she struggled back on her feet with shaky legs and Azula still sitting on her back.

While Korra tries to go up the stairs, Zuko sees this scene in front of him and feels as if he has got Korra's chains. There is nothing he can do for her in due time without drawing his father's wrath upon him.

He would like to loosen Korra's chains and get her as far away as he can, but he is afraid of the consequences that should await him if he really put it into practice. He averted his gaze from them and ran past them to his room so that he no longer has to watch the torture of the poor girl.

Although Azula loves to run after her brother and annoy him, she got a new toy that she has so many plans with.

While Korra makes her way to Azula's room with great difficulty, Azula can't imagine anything else than what she could do with Korra. With a malicious smile, the only question left in her head is 'what should I start with?'

I will try to post each week at least one chapter.