Jongdae lives for these moments in the backroom of a club.

A/N: This is Jongdae/anyone you want. That's why the tags are all over the place.

Thank you mods for this another round of smuttiness.

I hope everyone enjoys reading this ;)

Under the pulsing lights and throbbing bass.

A predatory smirk and a challenging grin.

Jongdae stifles a moan when strong arms press him against the dirty wall at the back of the club. He can hear the sounds of pleasure all around them, the moans and sighs getting mostly lost in the music. Back here, it is all hidden in view - the secluded area made for quickies in the club.

A room that Jongdae is familiar with.

Jongdae braces his forehead on his arm against the wall when the man behind him kicks his legs open. His lips tingle from the fervent kisses they shared on the way to the backroom. There’s a bruise forming on his hip when he bumped against a corner, too far gone in the kisses to notice it then.

Nimble fingers make quick work on the zipper sewn into the back seam of Jongdae’s leather pants. The jockstrap he’s wearing under leaving him exposed as the zipper is pulled down between his legs. There’s no question why Jongdae comes to this club.

The man grunts against Jongdae’s ear as he licks the sweat on his neck, reaching around to cup Jongdae’s crotch. There’s no words exchanged, no words needed when Jongdae curves his back and presses against the sizable bulge resting against his ass. He wants.

There’s a draft against his bare skin when the man moves away and Jongdae can’t hear it but he feels it when the cool lube is spread over his eager hole. A finger presses inside and Jongdae gasps into his arm. The stranger takes the hint when Jongdae begs for more: his words getting mixed with the pounding bass echoing in the backroom while his body is moving into the touch, begging silently.

He is rewarded with another finger easily sliding inside, spreading him, working him open as eagerly as his hole is accepting it.

The fingers curve up and Jongdae jolts. Long fingers finding his prostate as they stretch him open. It’s so easy, so familiar. And Jongdae fleetingly wonders how many men have been stretched open with these fingers before him.

There is a husky chuckle against his ear and Jongdae twists his head to swallow the sound in a desperate kiss.

A flash of light and Jongdae sees him slide on a condom before squeezing the last bits of lube out of the given sample they all receive when entering the club. His body trembles in anticipation when a strong arm is pressed against his back and he feels the blunt tip of the man’s cock against his hole.

Jongdae cries out at the initial stretch when the man pushes in, slow and deep. There’s strong hands on his hips now, fingertips pressing against the soft leather as the man moves, starting slowly and soon increasing the speed.

Everything seems to fade away, the other people in the room, the thundering bass shaking the floor and the wall, the smells, the tipsiness from the cocktails he had before as his mind and body concentrates on the thick cock sliding in and out of his body. The feeling is euphoric.

This is why he comes here every month.

The hands on his hips move upwards under his flimsy top. The stranger moans when his fingers find the metal bars pierced through Jongdae’s nipples. Jongdae shudders when the piercings are pulled and toyed with. His body feels like it’s on fire. The stranger is good — he’s one of the best Jongdae has fucked in this club.

The dual stimulation brings Jongdae over the edge. It’s soon, too soon, and he’s ready to apologize but the words are cut off with the man’s own cry of pleasure as he releases inside, hips bucking against his ass to prolong the feeling.

Jongdae feels a kiss on his neck before the man steps away. He stays against the wall and waits, the surroundings clearing up as his orgasm fades away.

The zipper is pulled back up and a slap is delivered on his leather-clad behind. Strong hands grasp his shoulder and turn him around, pressing him against the wall as the man kisses him hard.

There’s a promise in the man’s eyes when he pulls away and a wink with a lopsided smirk as he takes a step back towards the main area of the club.

Jongdae licks over the bite on his lip as he watches the man toss the spoiled condom in a trashcan next to the open door and disappears into the sea of clubbers.

These are the pants Jongdae is wearing to the club 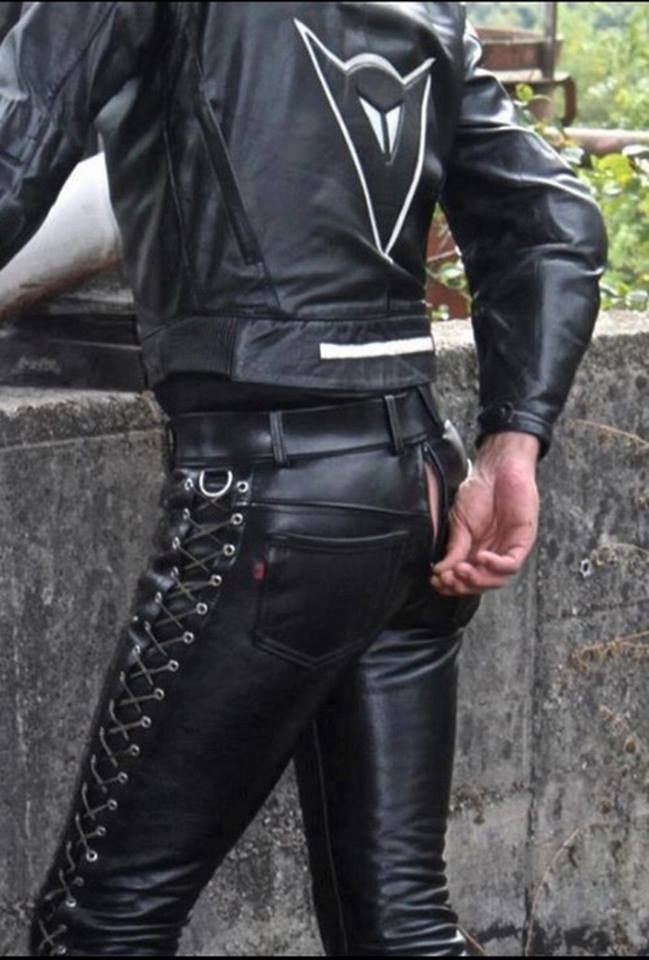 And I would be glad to hear with who you imagined Jongdae with! There is no correct answer, I'm just curious