Luz has wanted nothing more in life other than to join the ranks of the Emperor's Knights - the highest rank of royalty defenders, but after a disaster of a first impression with the bratty princess, she starts to wonder if it’s worth it. 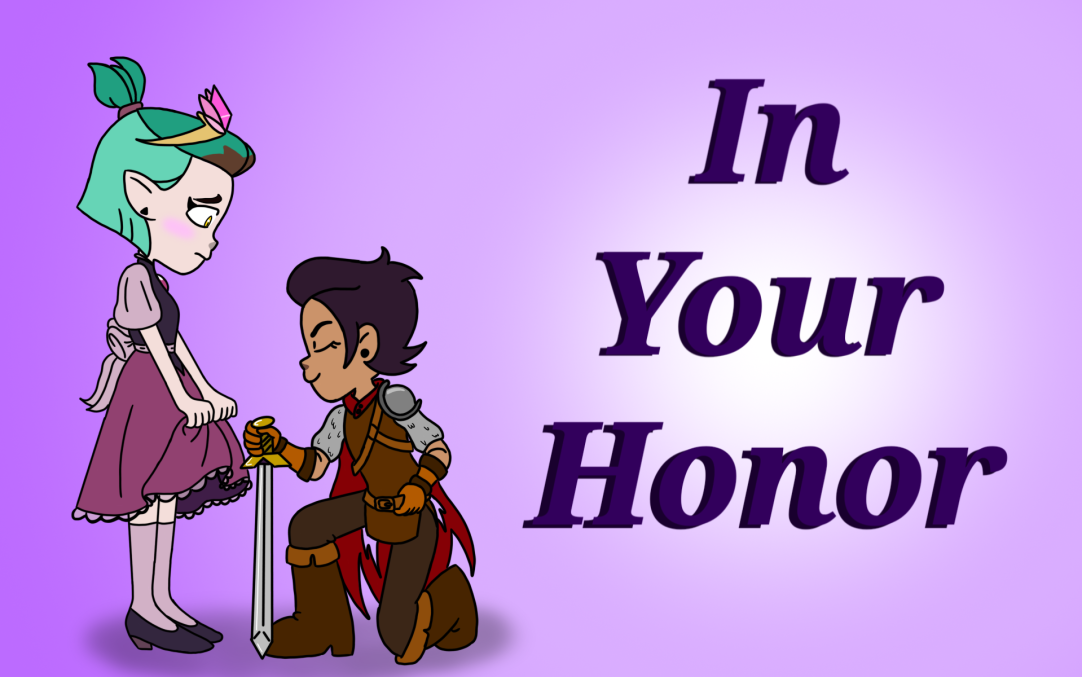 “Ah, Bonesburough!” Eda lets out a deep breath as she drives the carriage carrying her wife and step daughter. “I haven’t been here since Lily and I were kids.” The streets were much larger and busier than the small human village they had just left. The sounds of merchants trying to sell their wares mixing with the busy talk of the locals. Bonesburough was the largest Elf city in all of the Boiling Isles and it was home to the largest royal elvish family, The Blights.

“Oh I'm so excited to see where you grew up!” Camilia places a kiss on Eda’s cheek, causing the witch to blush momentarily. Eda laughs as Camilia leans against her, the two sharing the drivers spot for the carriage. “This move is gonna be so good for us, Mi Alma, I can tell.”

“Well, getting a fancy new job in the castle helps with that.” Eda adds as they slowly make their way through the traffic. “That's my wife , a small town healer getting a gig at the castle. I'm so proud.” The witch glows with pride as it's now Camilia’s turn to blush.

The two continue flirting as Luz, their loving daughter, rides inside the carriage with all of their belongings from their old home. Moving to the city means a lot for a fourteen-year-old.

Especially when the town is home to The Emperor's Knights. Only the coolest and most badass knights make into their ranks and Luz has been training her WHOLE life to make it in. Magic doesn't come easy to humans, many can't do it at all, but thankfully with the help of her step mom she's been able to learn just enough spells to try out in the Tournament. Whoever can survive long enough in that tournament will, without a doubt, make it into the Emperor’s Knights.

Luz is also aiming to be the first human to enter their ranks. Even though her Aunt Lilth is one of their highest ranking officers, Luz wanted to get in the hard way. Through hard work and determination! Aaaand lots of reading, as she's doing now. Luz flips the page in her hefty book ‘Spells, and how to Cast them Safely’ while she writes notes on the parchment inside when suddenly, the carriage comes to an immediate stop - sending her and her book flying out of her seat.

“Come on out, Mija , we’re here!” She hears her mother's voice muffled through the thick wood of the wagon.

Luz pulls herself up off the ground and jumps out of the carriage door. She lets out a small gasp as she sees her new home, a pretty large building made of brick. It had to be at least two stories tall! So much larger than her childhood home.

“Holy cow! Mom this place is huuuuuge!” Luz excitedly runs around to the other side of the carriage where her mother and Eda were unstrapping their small luggage from the top of the wagon. “You can fit like..” She takes a small break to count on her fingers. “Ten of our old house in there.”

“Woah, slow down there kid.” Eda chuckles as she pulls down a suitcase. “Take a breath and help me out here so your mom can go unlock the house.”

Luz jumps at the chance to help Eda, taking her luggage and pet carrier, bouncing the whole way as they follow her mom up the few steps to their new home. It takes Camilia a second to figure out the lock but once she does Luz launches herself into the building. She sets the suitcase and pet carrier down by the stairs before running up them, an echoing warning from her mother following her. She finds so many rooms on the second floor. They have two bathrooms, a master bedroom and like three smaller bedrooms. So much more than her old house.

“Hey mom, can I pick my room?” Luz shouts down the stairs. She hears the sound of the rest of their luggage coming in by Eda’s magic but no response from her mom. She goes halfway down the stairs and finds her mom moving some of the boxes to other parts of the house. “Hey, mom! Can I pick out my room?” She repeats loud enough for her mom to hear.

“Ask your mother, dear.” Camilia doesn't even look up from the box she's sorting.

Luz huffs, walking down the rest of the stairs. Her mom gives her one stern look causing Luz to rush out the door before she could face her mother's wrath. She leaps down the few steps to Eda who has just magiced the last of the boxes inside. Luz puts on her most innocent face as she approaches her step mother.

“Heeey, Eda? Can I pick my own room?” She gives Eda her most powerful puppy eyes, batting her eyelashes like she's never done anything wrong in her life. Eda looks down at her, clearly unamused, but eventually breaks and sighs.

“Sure thing, kiddo. But the master bedroom belongs to me and your mom, okay?” The owl witch pats Luz on the head before returning her attention to the carriage.

Luz practically runs back inside, grabbing her luggage and pet carrier, before sprinting up the stairs. She finds the one room with the best view of the castle and sets her stuff down. She bends down to open the pet carrier, looking inside to check on her familiar.

“King, wake up! We’re here.” She reaches in and pats his bone head, waking the small demon. “I'm surprised you slept the whole way!” King stretched and yawns before walking out of the carrier, dragging his small stuffed bunny with him.

“I'm the King of Demons, Luz, no small carriage ride will keep me from my afternoon nap.” The bone demon speaks, though his mouth doesn't move. He does small circles around the room before finding a corner and dropping his bunny rabbit. “Nice place we got here Luz, much larger than our old room.”

“Mija! Your Aunt Lilith is here, come say hi!” Luz gets interrupted by her mom from downstairs. The sound of the door closing echoing through the house followed by the soft sounds of her aunt and mothers talking.

“Come on King.” Luz picks up her familiar before heading down the stairs. She sets King down at the bottom before jumping into her aunt's arms. “Aunty Lily!” She hugs the older witch tightly before letting go.

“Hello Luz.” Lilith greets her niece with a pat on the head. “I brought you a house warming gift.” She pulls out a rolled parchment and hands it over to the younger witch in training.

“Oh my god, thank you Auntie.” Luz unrolls the parchment to reveal a poster for the Emperor’s Knights and practically crushes her aunt in another hug. “I'm going to put this up right now!”

Lilith waves as Luz runs back up the stairs, King struggling up the steps after her, before turning to her sister-in-law.

“Are you prepared for tomorrow?” her voice carries a tinge of concern as she watches Camilia unpack another box. The human woman sets down another stack of plates before standing and turning to Lilith.

“I mean, how ready can I be?” She laughs nervously. Camilia was about to be the only human to work in the castle. A task that carried so much stress to be the best, as many Elves looked down on Humans for having shorter lives and no magical talent.

“If anyone tries to say something, I’ll just challenge them to a witch's duel.” Eda says proudly as her sister looks at her with doubt.

“You won't be able to stick around every day she works, Edalyn.” Lilith points out. “Especially since you personally refused the Kings request to join the Emperor’s Knights with me.”

Eda grumbles a reply, walking off towards the kitchen with a stack of plates. The sounds of the porcelain plates clinking together drifts softly from the entryway. Lilith lets out a soft sigh before returning her attention to Camilia.

“I’ll be there tomorrow so if anything happens, please reach out.” She smiles at her sister-in-law.

“Of course.” Camilia gives Lilith a pat on the shoulder before seeing her out with the promise of seeing her tomorrow.

With that taken care of, Camilia and Eda spend the rest of the night unpacking and helping Luz set up her new room. The family was full with excitement for the days to come.

The next morning Luz wakes up to a scrying call. Her mother's voice comes through the small mirror she uses for calling, and Luz fumbles out of bed as she reaches for the mirror on her nightstand.

“Mija? Mija! Luz!! Darn it girl, wake up.” Camilia called through the compact.

“Sorry mom, I guess I was just really tired from the move.” Luz yawned as she held up the compact mirror.

“You need to start getting up earlier if you want to continue training with Eda.” Camilia tsks as her daughter sets the mirror down to try and fix her hair in her vanity mirror.

“I know mami but is there a real reason you called me?” Luz does a double finger gun in the vanity mirror, confirming that her hair is exactly how she wants it, before picking the compact one back up.

“Yes, your Auntie Lilith forgot her lunch today.” Camilia explains. “Can you bring her some food from home?”

“An excuse to see the castle up close? Of course I will.” Luz smiles. “I’ll be there as soon as I can.” She bids her mom farewell before getting ready for the day and bounding down the stairs.

Luz finds Eda sitting at the dining room table, King curled up on her lap as he reads the daily paper. Sitting in front of her is a perfectly wrapped up lunch, the handkerchief cover made with a cute raven pattern.

“Is that...?” Luz points to the lunch as Eda lowers her paper.

“Yeah, your mom already called me about it but I’m not technically allowed in the castle, so you have to take it.” Eda explains with a rather bored tone. “Lilith already told the guards to let you in so just tell them you're her niece.”

“Okay! See you later, Ma.” Luz gives Eda a quick kiss to the head, and ruffles Kings fur, before heading out the door.

The path to the castle was long but thankfully easy to follow. It was the only path wide enough for two carriages to head down side by side. Luz began her long walk to the castle, buzzing with excitement of finally getting to see the building in person.

Maybe, if she was lucky, she’d even make a new friend.