To Lie in the Lap of God

at the altar on thy knees

I seriously owe this to lelouch after eviscerating his composure so fuckin hard in Code Talk—esp when I hc him as the absolute top dom in this relationship so um here you go, it's CT compliant if you want it

(straight out of the gates on action, I'm not here for foreplay I'm here to right my sex crime)

“Hmm,” muses Lelouch to the room, chin braced on elegant fingers, considering. From his throne he watches Suzaku, still kneeling, having finished his report. Victory marks him well, even the fall of his cloak can’t hide how his white gloves are married with blood. He could’ve easily changed but the Knight of Zero knows his emperor enjoys these moments, relishes at putting on a show for those who are present in the audience chamber to see.

There is small pride, after all, in conquering a nation before lunch. A disgusting sort of pride.

“That is all,” the emperor says in dismissal as he stands, robes floating around him regally to settle, sending off the congregation. A sidelong look has his remaining attendants leaving as well, Sayako with a soft smile and Jeremiah with pursed lips as they bow.

Lelouch strides down the length the audience chamber, passing Suzaku on the way and the Knight of Zero stands to follow his emperor as he sweeps past him and to the grand, heavy doors of the room and Suzaku catches the hint of a sly smile playing at Lelouch’s lips before the emperor personally closes the doors. Locks them. His majesty turns and leans back against the door. Elegant fingers gesture, beckoning him closer, and how could Suzaku do anything but obey? Those fingers skim over Lelouch’s mouth, accentuating rather than hiding his smile as Suzaku steps forth, chin tilted up to meet his emperor’s gaze, rubies that glisten behind lowered lashes.

“Kneel,” orders his lord and Suzaku falls to the ground with jarring force, a puppet cut from its strings.

“Come,” says his liege, cupping the back of Suzaku’s neck and gently urging his head closer, closer, closer and Suzaku follows, a doll stripped of thought.

Suzaku’s glassy-eyed and panting already, saliva pooling in his mouth and knees grinding into the marble floor as his face is pressed into his emperor’s cock.

One hand comes up but Lelouch steps on the other’s wrist before it can follow and Suzaku lets his arms drop back down obediently, nosing along the gap in the robes instead as he gasps great gulps of air, gripping the clasp of Lelouch’s pants with his teeth as he’s half smothered by fabric. Working Lelouch’s dick out from under all those layers is a trick and a half but Suzaku managed it with enough ease from the start—for which his lord has been more than willing to offer up compliments to his natural born pet slut as he forces Suzaku’s face further into a mattress.

“Ahh,” sighs the emperor as he cuts off Suzaku’s air, “very good. That’s it,” he coos, releasing his hold for a soft caress, “that’s his majesty’s favorite whore,” and Suzaku lets it sink to him with a muffled sob as fingers run up his jaw and rub soothing circles before they dig into the joint, forcing it to hinge wider. Saliva drips down his chin and silk slides along his throat, hands coming up to brace against the door as he lets his lord deeper, lets him closer, lets him stay.

Lelouch lovingly brushes a stray lock of hair out of Suzaku’s eyes and rubs away the beginnings of a tear as Suzaku starts to choke.

His lord gives a considering hum as he slowly, oh so slowly starts slide back out. Fingertips press into Suzaku’s throat and chase the sensation upwards, an echo that causes his breath to hitch before nails drag back down his neck, heralding the return of pressure as Lelouch eases back in deep, deep, deeper than before and lingering.

The hand runs down his neck in a caress, thumb pressing into the hollow of Suzaku’s throat, choking him twice over and he can’t help his whimper, hands dragging down the door, nails gouging deep even through his soiled gloves, Geass kicking up in the back of his brain, a gentle buzz, a reminder, a leash, ownership.

Lelouch gives him a warm, considering look when Suzaku catches his gaze, eyes soft with appreciation and sharp with malicious amusement before he grabs Suzaku’s hair again and jerks his head into a different angle, dragging a crushed whine from him.

“Did you hear me, Suzaku? I said you did well,” and Suzaku half gargles a gag as he tries to nod around Lelouch’s dick in his throat; so far and so snug, like it belongs there, part of him.

“Good dog,” Lelouch murmurs as he hooks a thumb into Suzaku’s mouth to run along his bottom teeth and Suzaku comes.

“Lick it up?” his majesty asks after in a half question, leaning against the door as he slips down to sit.

He leans in instead, hands reaching up to the Demon Emperor’s pert ass to hold him in place, smearing the mess that he left on Suzaku’s face up his thigh and chasing it with his tongue, earning a sharp breath from above.

He hitches slender legs over his shoulders and raises a brow, the emperor’s eyes narrowing as he slides down the door even more, watching Suzaku through his lashes with sly amusement.

“Woof,” he says dryly, and Lelouch huffs a laugh.

(and then Suzaku eats him out until he cries)

uhhh yeah, dom time is over now it's back to wrecking lelouch's composure hours whoops ¯\_(ツ)_/¯ but I hope the demon Emperor has forgiving me for my slight to his character. 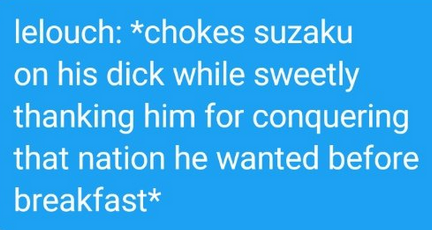