hashtag: flower crown (and having a crush on your friend)

Ram has always been The Weird Girl at school, so, when Queen arrives and insists on becoming friends, her first thought is: what the fuck?

The one in which Ram is a girl, King is Queen (also a girl) and their love still exists

Disclaimer: My Engineer and its characters doesn't belong to me, if that were the case, I would've had a wlw ship, Ryan would still be on the show and there'd be like 50 episodes!

This was originally written in spanish. Thank Satan for doing 98% percent of the job and my girlfriend for the other 2% (dedicated to the one I love). If you see any mistake, please tell me! That way I'll improve my english! ❤️ 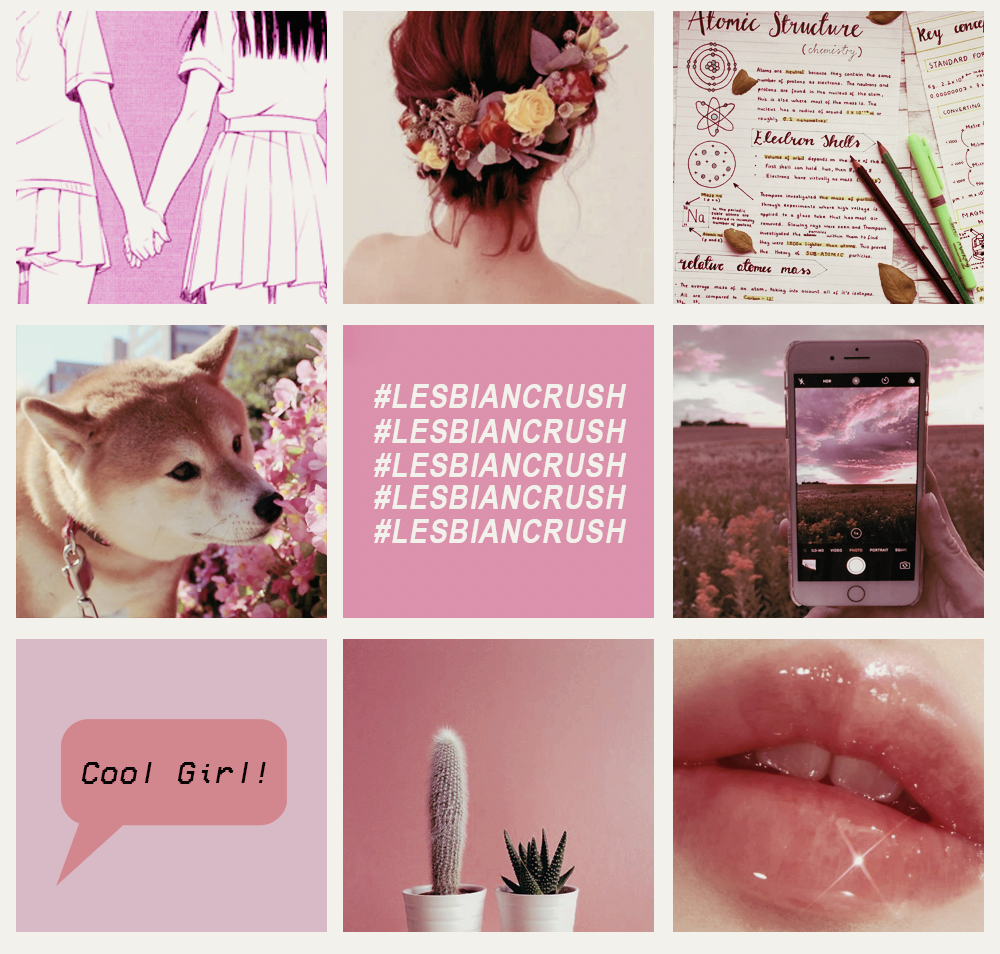 RamQueen moodboard (Disclaimer: all images/photos used on this moodboard are NOT of my property, I just found them on Google Images)

Ram has always been The Weird Girl at school. If it wasn't for her tattoos (hey, how pretty, what do they mean? Why did you get your neck tattooed? Did it hurt?), she would go unnoticed. She is the one who sits at the back, in the old stripped desk that nobody wants and takes notes, with a very ugly handwriting, of everything, everything the teachers say. The one who never speaks or participates in classes (so neither less nor extra points). The one who prefers having a conversation with a dog instead a person. And, if her beloved schoolmates have decided not to annoy her, it is because a) She is quite pretty, and they let her get away with it, and b) Someone heard that she is a national boxing champion and well, nobody wants to be the idiot who discovers the veracity of said rumor.

But just as they never make fun of her nor they give her cruel nicknames (and boy, do they like to give cruel nicknames), neither do they speak to her.

So, when Queen arrives (that is, The Popular Girl, the one who gets the best grades from the Faculty of Engineering, the one with the perfect skin) and insists on becoming friends, her first thought is: what the fuck?

She wanted to tell her no, that with her four buddies she already has more than enough, thank you, but, shit, Queen insists and looks for her and tries with all her might to find a topic of conversation and Ram does not hate her nor drives her away (in fact, she intrigues her), although she doesn't talk either.

Cool Girl, she calls her one day. Says she looks very badass and stands out with that tattooed skin and her social distancing attitude and her "I don't care about anything" (does she really makes that impression?). Ram thinks that if there is a Cool Girl here, it's Queen (because she has a small smile that feels so big when she's watching Ram, and some mermaid hair she would like to brush and caress), however she takes on the nickname without questioning it anyway.

After a while, when she realizes that Queen has made her life mission to be friends with her, Ram accepts her. Because it actually isn't like she dislikes her, and she admits that she has helped her a lot: she lends her her notes (which, surprise: they are gorgeous and tidy, with small illustrative drawings, purpurin, and with so many colors that Ram wonders how she has the time and motivation to do them), helps her study for her exams (and always explains the exercises to her in such a calm way, as if the world had stopped only for them to study together). Even when they go out to have dinner, she never pressures her to speak, and that's something Ram, like the great introvert she is, truly appreciates.

In addition, she discovers that she does enjoy hanging around with Queen: she is funny, intelligent, and despite her fear of puppies, she always sends her cute pictures of them because she knows they will make Ram happy.

And as if all this is not enough, she smells so nice, like flowers, like a summer picnic without mosquitoes and next to the person you love. Later she realizes that it is because this girl is fascinated by plants and flowers and all nature and she would be delighted living far away, in a forest, like a beautiful fairy (the role fits her).

So, one day Ram decides to give her a gift, as a thank you for every little detail she has had with her (because that's what friends do, right?). But what can she give to a girl like Queen?

The answer comes one sunset, when they are in the park and Queen is taking photos of plants for her Instagram (hashtag: nature, hashtag: aesthetic). Ram watches her: she looks adorable, with her face wrinkled and focused trying to capture the perfect image for her social media, which, by the way, has a very marvelous feed (like everything she does) with pastel color filters that match reality, with the shades of orange and violet that are reflecting right now in Queen's skin and is making her seem like a deity. And seriously, Ram wonders what products she uses for her face because it looks so smooth and clean (and for a second, she tries to imagine how her tan complexion would feel under her lips).

A flower crown, she concludes, is the ideal present: they are beautiful and make you feel like a magical creature (and beauty and magic are two concepts that she associates with her friend). But, of course, it cannot be the ones that are already made, neither with bought flowers, much less plucked (she supposes Queen would think that it is a crime against Earth), but with petals that have come off to follow their own path and branches that lie forgotten in the grass.

She was never a fan of making crafts, even in kindergarten, you can see that when you look at the end result of her creation: it is not the perfect flower crown (they are actually more leaves than flowers), but she has invested many hours of her life trying to find the right materials (in the park, in her garden, in the schoolyard) and finally putting them together, so it's not like she's going to throw it away (despite how tempting the idea sounds).

The next day, when classes are over, she meets with Queen, and sheepishly delivers her gift, no words daring to escape out of her mouth.

“Cool Girl, is it for me?” Ram nods. Who else could it be for? Only Queen inspires her to do this kind of things. “It's so beautiful! Thank you.”

She places it delicately on her friend’s head, her fine features reflecting the emotion of someone who has just won the lottery. And oh, her eyes shine hypnotically, like the stars you can gaze at the field, far from the pollution of the city.

“Take me a picture for my Instagram!” She passes her phone over to her and Ram settles in, focusing on the camera, trying to find the best angle (though who's she kidding, she looks fucking ethereal from all angles).

“Do I look pretty?” Asks cheekily: she knows perfectly well that she always looks pretty.

But it is when she shakes her eyelashes effusively and places her right hand under her chin, and her left one at the waist, performing an exaggerated pose, that Ram's cheeks start to turn red in an attempt to match the crimson tone of her lipstick. And suddenly she feels so hot and it's like she is suffocating even though they are outside and a strong current of wind is making the trees (as well as her skirt) to dance.

The thought, although it had already been whirling, finally settles completely in her mind and threatens to never leave her: she has begun to like (and not exactly platonically) her friend.

Hashtag: She has a crush on Queen?

Thank you for reading ❤️ RamQueen has so much potential, let's all hop on the train :D