Charlie surrenders herself to Alliance custody after stopping the Collectors. 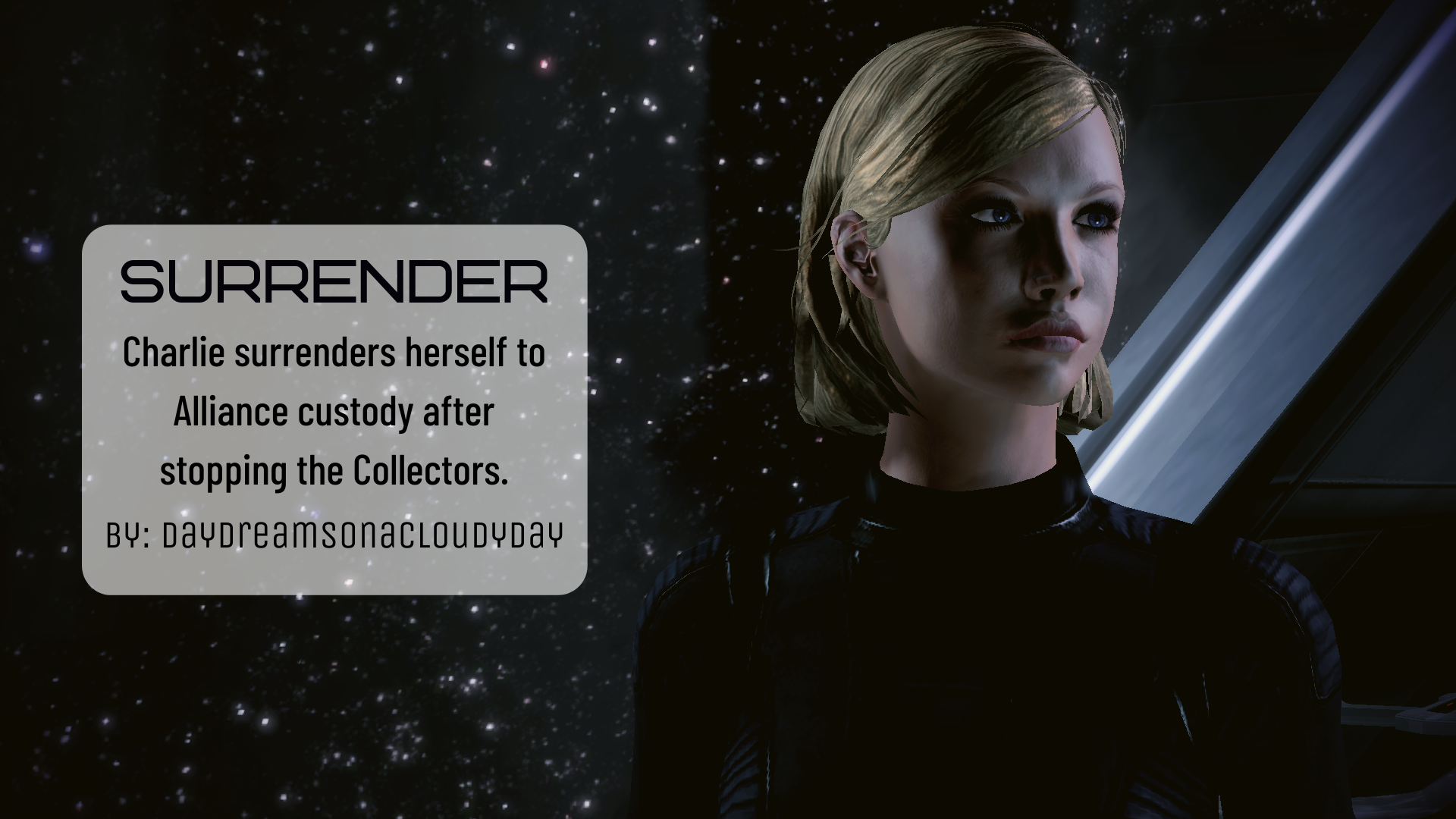 • If you don’t know, Charlie and Kaidan didn’t exactly have a relationship in ME1. They slept together before Ilos but then Charlie broke his heart and ended things before they even really started because she’s got lots of baggage from getting her old boyfriend killed on Torfan.
• Needless to say, Horizon turned into a complete shitshow even though they both are relieved to see each other alive. She kind of loses her shit on him and says some crap that she really needs to apologize for.
• Hackett gives Charlie the Arrival DLC assignment right after Horizon, and that’s when Charlie does it. I wrote about that in Good Intentions, but basically Charlie sees it as an opportunity to show everyone—Kaidan included—that she’s trying to do good and isn’t working for Cerberus for the hell of it. Of course that goes to shit and she blows up the Alpha Relay to stop the Reapers, which doesn’t help her whole "Butcher of Torfan" image.
• Last but not least, while Charlie and Kaidan didn’t have a romantic relationship in ME1, they were very close (despite her efforts not to be) and she did tell him about what happened on Torfan after the Major Kyle mission. I wrote about that in The Butcher of Torfan.

More info about Charlie can be found on her website: https://sites.google.com/view/charlieshepard/home

"Joker," Charlie replied, coming to a stop next to the pilot’s chair. She looked out at the mass relay leading to Alliance space ahead of them and frowned, her brows drawing together.

"Did you change up your hair or something?" Joker asked, eyeing her while he pressed buttons on the console before him. "You look scarier than usual."

"Totally. Spent extra time on my hair and makeup," she drawled sarcastically. "I really want that 'royally pissed off' look to come across on camera."

He snorted. "You don’t need hair and makeup for that, Shepard."

"Thanks, Joker. That’s one of the best compliments anyone has ever given to me."

Huffing, Joker set the Normandy’s course for the mass relay, hesitating before sending the ship on her way. "You sure you want to do this?"

Charlie sighed, taking in the sight of the mass relay through the viewing port, the giant rings revolving around the glowing eezo core. "What else am I going to do? The Collectors are taken care of, and I can’t spend the rest of my life running from both Cerberus and the Alliance." She pursed her lips, suppressing a shiver at what Harbinger had said to her before she destroyed the Alpha relay, the reaper’s words haunting her nightmares for months now. "Besides, someone has to warn them about what’s still coming."

"Can’t we just send them a message?" Joker started, "I mean, the Alliance thinks you’re a terrorist mass murderer and all the other ridiculous things they’re going to charge you with. All you did was stop the Reapers."

"Too bad the rest of the galaxy doesn’t see it that way. This is me we’re talking about. Butcher of Torfan, remember?"

"Can’t forget 'Butcher of Bahak,'" Joker teased, and Charlie frowned, glaring at him. "Still not funny?"

"Just… take us through the relay," she cut off, shifting her weight as she crossed her arms. "I want to get this shit over with."

Kaidan carried his lunch tray across the cafeteria of the Alliance Warfare Center, when he heard the tell-tale sound of a "breaking news" alert coming from the large vid-screen hanging on the wall. He glanced over at the screen and read the headline, stopping mid-stride as his body went rigid at the words.

The words echoed in his mind as an image of the new Normandy landing at Alliance HQ filled the screen. Without realizing, Kaidan gripped the sides of his lunch tray tighter and drifted closer to the vid-screen as he watched and waited to see what would happen.

The news vid had attracted the attention of others in the cafeteria, and some of his Biotics Division students crowded around the vid-screen beside him, whispering to each other about what was happening. The reporters on the screen were talking about it as well, but Kaidan barely heard his students or the reporters, his mind only able to focus on one thing.

She emerged from the airlock of the Normandy, dressed in a black tank top and uniform pants, as if she were just casually roaming the ship, and Kaidan’s chest tightened at the sight of her, just like it had on Horizon all those months ago. Many of the same thoughts that crossed his mind back then were running through his head now... Is it really Charlie? How is she alive? Why work with Cerberus? And then there were the new questions he’d accumulated since Horizon… Why did she blow up that Batarian relay? Did she stop the Collectors? Did she get my email?

Kaidan was pulled from his thoughts when the news drone recording footage for the vid zoomed in on Charlie’s face. She was scowling at the crowd of people surrounding the Normandy, ignoring the cacophony of questions the press was littering at her, glaring even harder at them when she managed to make out specific questions that she no doubt deemed ridiculous. It almost made Kaidan laugh because it was so… Charlie.

Two Alliance soldiers approached her, attempting to seize her arms, and she snapped her gaze at them. Charlie said something the camera drones didn’t pick up over the crowd and Kaidan didn’t need to hear her words to know she was pissed. He could see it in the way she held herself, in the way her nose wrinkled because of the almost snarl she made when she was trying—and failing—to not look angry. He was also pretty sure he saw her lips form the words "fuck off," and when she was done speaking to the two soldiers, they simply flanked either side of her, neither of them laying a finger on her.

The Alliance soldiers escorted Charlie through the crowd, and she didn’t shy away from the attention, holding her head high and practically sneering at every member of the media she passed. All the drones followed her procession towards one of the buildings, and she looked right into the camera as she walked by, her face filling the screen, almost as if she were in the room with him.

His students were still murmuring to each other around him, saying she looked pissed, like she wanted to "show everyone what a Spectre could do," and how they were glad they weren’t the two soldiers tasked with bringing her in. Others were speculating what the Alliance was going to do with her now that she’d turned herself in, given what she’d done since she’d come back from the dead.

But Kaidan’s thoughts were somewhere else. The moment he’d seen her blue-gray eyes, he knew exactly what was going on inside her head. He knew her, knew how she thought, and recognized that tiny flash of fear in her gaze that he’d see anytime Torfan would come up and she talked about how she was a monster. When she looked into the camera, he didn’t see the typical "angry, scary, Commander Shepard" everyone else was seeing, he saw the real Charlie Shepard, the woman he fell in love with—the woman he still loved, despite everything.

Swallowing hard, Kaidan kept watching as she was escorted away into the Alliance building, until the camera drones lost sight of her. The moment the door closed behind her and she was out of sight, it was like he was freed from a spell, and he released a breath he didn’t realize he was holding. He forced himself to move, and walked to an empty table before he sat down, placing his lunch tray in front of him.

But Kaidan didn’t start eating. He kept thinking about the look in her eyes. How he remembered it from when she first told him about what happened on Torfan and how broken she’d seemed afterwards, and how all he’d wanted to do back then was pull her into his arms and hold her, but he didn’t, because she was his commanding officer.

He thought about how he’d never actually hugged her until Horizon. How, despite the doubts going through his head back then, he had savored hearing the sound of her breaths in his ear when the sound of her choking on the airless vacuum of space haunted his dreams. He remembered what it was like to smell her after so long, her flower and pear-scented soap mixed with the aroma of gun oil and Charlie.

Kaidan thought about how in that moment, all he really wanted to do was hold Charlie like that again and tell her that everything would be okay and that she wasn’t a monster. He wanted to hug her and tell her she wasn’t alone… but instead, Kaidan picked up his fork, and began to eat his lunch.

MrsMarvelKnight, aleshepard, and PlaneJane87 as well as 5 guests left kudos on this work! (collapse)