Fall of the Republic

Aziraphale and Crowley: Jedi Knights in service of the Republic. From the moment they set foot inside the Jedi Temple on Coruscant, they have been bound together by the machinations of the Force. With the Republic embroiled in the Clone Wars, the two must take up arms against the treasonous elements that would undo a thousand years of history. Aziraphale enjoys playing saviour at the head of his own legion of clone troopers, but Crowley is wary, a mutual distrust between him and the Council having been formed because of his former master.

The two friends must come together in this pivotal moment in Galactic history, but as the war progresses, it becomes more and more clear that neither the Jedi, nor the Republic, nor the CIS can claim moral superiority over their enemies. With matters moving to a head, even the righteous Jedi must make choices between following orders and doing the right thing. The question: will the Republic and its Knights fall? Or will they be able to persist?

Purely a passion project, the idea for this fic came about during a confusion about which 'Episode 3' we were actually talking about. She meant Good Omens episode 3, which takes the viewer all through history. I could only think of a Venator star destroyer and war drums, as two fighters sped through a battle. This fic is a compromise.

Not beating around the bush: this story is the War in Heaven, when Crowley and Lucifer fell together, but in spaaaaaaace. Star Wars and Good Omens share a surprising number of thematic beats, be it that Good Omens makes more good jokes. Not to be outdone, Star Wars has lightsabres, so we can safely call that a draw. I just love both fandoms, so here is a story that combines, hopefully, the best of both worlds.

Chapter 1: Prologue: A Pyre on Naboo 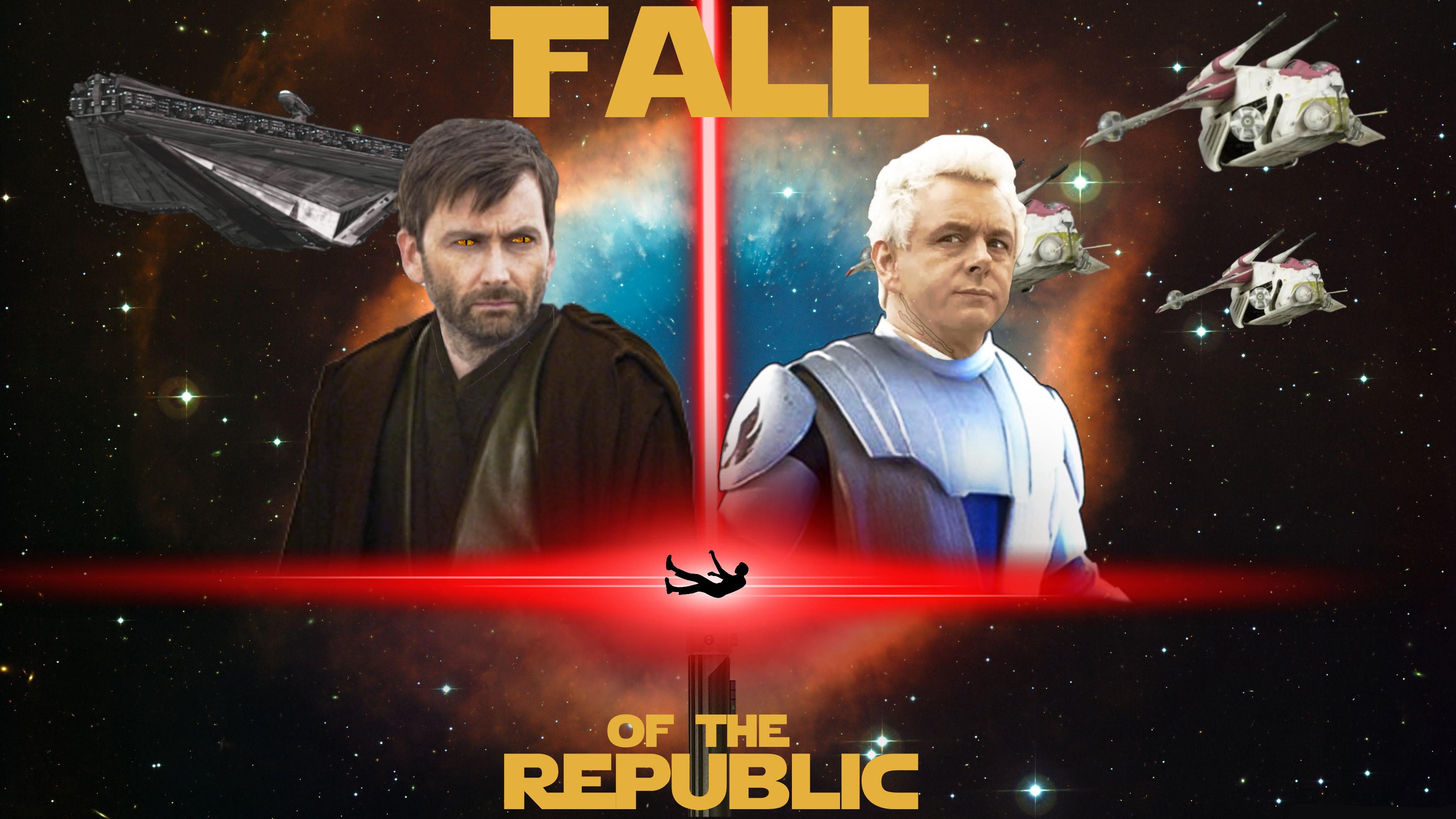 A mellow evening breeze, still carrying the residual heat of the hot summer day, blew through the Queen Yram Pavilion. Situated at the edge of the Theed palace grounds and overlooking the farmlands beneath her Great Cliffs, it had long been the place where Nubian notables and former monarchs had been laid in state. Now, it hosted an event that was even more ancient and sacred than the wake of a monarch; the pyre of a Jedi master.

Flames leapt up from the oiled wood to feast upon the flesh of Qui-Gon Jinn, his body the last worldly possession that separated him from becoming one with the Force. Only the burning of his robe produced a semblance of smell, mixing with the smell of burning wood to create the smell of a summer’s eve; a sign that Jinn had been a proper Jedi, and was indeed joining with all the Jedi that had gone before him.

From the back of the crowd, a white-haired padawan gazed at the ceremony, as much at the pyre as the people that had assembled to watch. The group was small, he knew, and for a reason; the Jedi refused to turn Jinn’s death into a spectacle. Not in the least because of the mysterious circumstances of his demise. Whatever had happened, the Jedi Council wanted it kept secret, or vague at least. No Jedi had been killed in the line of duty for nearly a century, and the myth of their invincibility had at once been shattered. There was no need to turn that realisation into a full-blown panic. Even Aziraphale, padawan-learner to Mace Windu, was kept in the dark, which was a habit of the secretive Jedi.

“I think it’s not about how he died, but who killed him” whispered a familiar voice to his right. Aziraphale did not have to look over to see who was talking; the feeling drifting over with the whisper was unmistakable and personal. Neither Aziraphale nor Crowley knew why their force bond was so strong, and the Council had only observed it with curiosity rather than concrete answers. No matter how well they shielded their feelings, they could always peer through with one another, even when their Masters couldn’t. The pair had found each other during the many studies that had been conducted upon them, and even though they were padawans to different masters, they could trust to meet regularly.

“When did you get here?” Aziraphale asked, choosing not to engage with Crowley’s riddling remark. Aziraphale could feel that Crowley was eager to tell something he had learnt, and he wasn’t going to dignify that feeling. At least, not yet.

“Around the same time as you” Crowley whispered back. “But my master wanted to check the reactor first. The one…”

“… where Jinn died?” Aziraphale cut him off, inclining his head slightly to the right. He could now see his friend, whose master had now also silently joined the gathering. Crowley’s master was a renowned Jedi, known for his skill and wisdom in many aspects, even if it might have been called unconventional. Something that could be said about Qui-Gon as well. The man’s beard had gone half-white, with its usual brown-black slowly receding into the flanks of his hairline. Like always, he held himself proudly and his face betrayed no emotions. Unlike Crowley, his master knew how to shield his feelings from Aziraphale, but even with all his might, the reflection of fire refracted by budding tears still betrayed his devastation at the loss of a friend. Jinn and him had always been close, but to see the stoic master so distraught surprised Aziraphale.

"What was it he did that got everyone so upset, anyway?" Crowley asked as an aside.

"He found the Chosen One" Aziraphale answered, his eyes shifting to look at the young boy. He was very old to begin Jedi training, and even with Windu's closed nature he knew his master was not happy about the whole affair. Still, no matter how bold, Windu was not one to pick fights with profecy.

"Oh, yeah... That will do it" Crowley said, slightly raising his eyebrows.

“This day would be bad enough…” Crowley whispered, like Aziraphale now gazing sidelong to his master.

“Without the return of the Sith”

Aziraphale’s stomach turned. His gaze shot immediately back to Crowley, filled with horror. His friend felt it immediately, twisting his head at break-neck speed and meeting Aziraphale’s shocked gaze with surprise of his own. Aziraphale felt a pang of guilt well up inside Crowley, who had obviously expected that Aziraphale was already privy to that information.

“I… I thought… master Windu, he…” Crowley began, stuttering, but Aziraphale shook his head, trying to avoid suspicious glances by peering back into the fire. Even then, knowing that Jinn had been slain by a Sith blade turned every lick of flame into a reminder if their evil. Like the fire, anxiety flared up from his gut to his extremities, his fingers now tingling. It took all Aziraphale’s strength to shield his feelings from the other Jedi there, among whom were the three most powerful force users in the galaxy. Four, if they counted the boy standing next to Obi-Wan.

“Master Windu does not discuss everything he knows with me” Aziraphale whispered. “Comes with his position” he reasoned, although he knew that the bond of trust demanded that masters and their padawans were to share everything, no matter how sensitive the information. Aziraphale had lost count of how many times Windu had claimed he would explain later, to the point that, if his master had sat him down right after the funeral to tell everything, he could not possibly divulge everything before Aziraphale was knighted.

“Well, I think my master tells me too much sometimes” Crowley posited, doubtlessly but unsuccessfully to make Aziraphale feel better about his own relationship with his master.

“I would be surprised if he shares half the stuff he tells me with the Council” Crowley added, more into the Naboo breeze than to any listener in particular. Aziraphale expected to feel confusion well up within Crowley, or a sense of responsibility. And he did feel all those things, but deep down there was a sense of worry, so small that Crowley might not even have felt it himself yet. The two friends often knew more about the feelings of the other than they knew about their own, and with Crowley’s worry, Aziraphale’s grew as well.

When the sun had gone beyond the horizon, the pyre was left a smouldering heap of charcoal. Slowly, the assembly began to filter out, with the Boss of the Gungans and queen Amidala walking out side by side, to signify their equality of rank. Their honoured guest, former senator for Naboo and recently-elected Supreme Chancellor Palpatine, was right on their tail, trying to put a comforting arm around the even more recently knighted Obi-Wan Kenobi. Before he could, Crowley’s master had beat him to it, almost dragging the young man away from Palpatine’s grip. A foul frown appeared on the Chancellor’s face for but a moment, but he recaptured himself and instead put a hand on the shoulder of young Anakin.

“Yes, master Dooku” he replied, following swiftly. He and Aziraphale shared one last gaze, which had always been enough of a goodbye for them, before they went their own ways again. Aziraphale broke off to find master Windu, who was already half way to leaving the pavilion and had seemingly forgotten about his padawan. Head bowed Azirpahale rushed after his master, keeping just enough distance not to overhear his conversation with master Yoda. The group entered the palace proper before slowly breaking up, each of the attendants leaving for their own quarters within the building. Aziraphale just caught a glimpse of master Dooku, holding Obi-Wan in a warm embrace. Crowley was standing next to them. His eyes met Aziraphale’s, and for a moment, Crowley looked confused and apologetic. Then, his farce hardened, and Aziraphale could read only some form of pride. Aziraphale swallowed and left for his quarters. His friend would never feel pride at such an outward show of affection and attachment. Or would he?

With the Sith returning, perhaps the whole universe was going to be flipped on its head. From the balcony of his room, he could overlook much of the dark farmland below Theed, marked with the little lights of hamlets dotted around the countryside. Naboo was, much like the rest of the galaxy, peaceful. Those who woke up in the morning were living in freedom, thanks to the ceaseless efforts of the Jedi and the Republic. It was hard to imagine that that could change, but only days before, the city had been under hostile occupation, its civilians hoarded into camps. And that was the work of months. Who knew where another ten years would take them? Where another ten could take them?

Thank you so much for making it all the way to the end notes. This is very much a work in progress, so if you have feedback or ideas you would like to see in the future, feel free to leave a comment!