The Archive will be down for 2 hours of maintenance between 05:00-07:00 UTC on Thursday, October 1 (what time is that for me?). Please check @AO3_Status on Twitter for updates.

Lucille has always given Thomas what he needs.

He knows that it's wrong. He's always known, from the very first time Lucille came to him--before that, even. Because his longing for her didn't start then, with her hand upon his cheek and her lips pressed almost chastely to his. No. The truth was he couldn't remember a time when he didn't long for her in some way. It was comfort at first, true, but it changed so gradually that it's easy to believe that it was always this.

The words spin dizzily, giddily through his mind as Lucille lifts the knife again. Small, dainty, beautiful--and deadly, much like his beloved. His prick stirs deliciously where it's trapped inside her, the languid movements of her body dragging him to the edge and back again and again as she takes her pleasure from him, sweetest torture. "Please," he begs, sliding his hands over her pale thighs, smearing crimson indiscriminately over the creamy flesh, watching transfixed as the blade releases another droplet. This one falls to his chest, and Lucille bends gracefully to savor it before granting his plea and pressing her red stained mouth to his. His hands are feverish now, upon her back, her breasts, her hair, a crescendo of want overtaking them both. She pulls away from his lips with a gasp, head thrown back, shuddering as he moves inside her. Her pulse flutters against his lips like a trapped bird, and he revels in the softness of her skin, the midnight cloud of her hair against his cheek, the sweet musk of her desire. "Lucille," he gasps, tilts his face to hers. Aching need that only she can soothe, and she smiles at him, at his greed.

Her blade falls again and blood wells up from her breast once more, a bounty. "Here, my love," she whispers tenderly. "For you." Thomas takes her gift eagerly, lapping up the sustenance she offers as her body clenches around his. "Yes, my love," she croons, pressing him more tightly against her. "Oh, yes!" The pleasure overtakes her then, her voice raised in rapture as he leaves her offering to seek his own release, each of them drowning in the other, as it has ever been.

"Do you think we have made a child?" she asks drowsily, after.

"We can but pray, beloved," he says softly, tenderly. His fingers are clever and quick, wiping away the blood and sealing away the small wounds with plaster. When he's done he traces the scars, old and new, with love akin to reverence. "And hope that God be kinder this time than the last."

He holds her then, as she weeps, and longer when she falls into restless sleep. We will find a way," he thinks, stroking her hair gently where it spreads across her shoulders, lovely and dark. Whether God be willing or not, we will find a way. 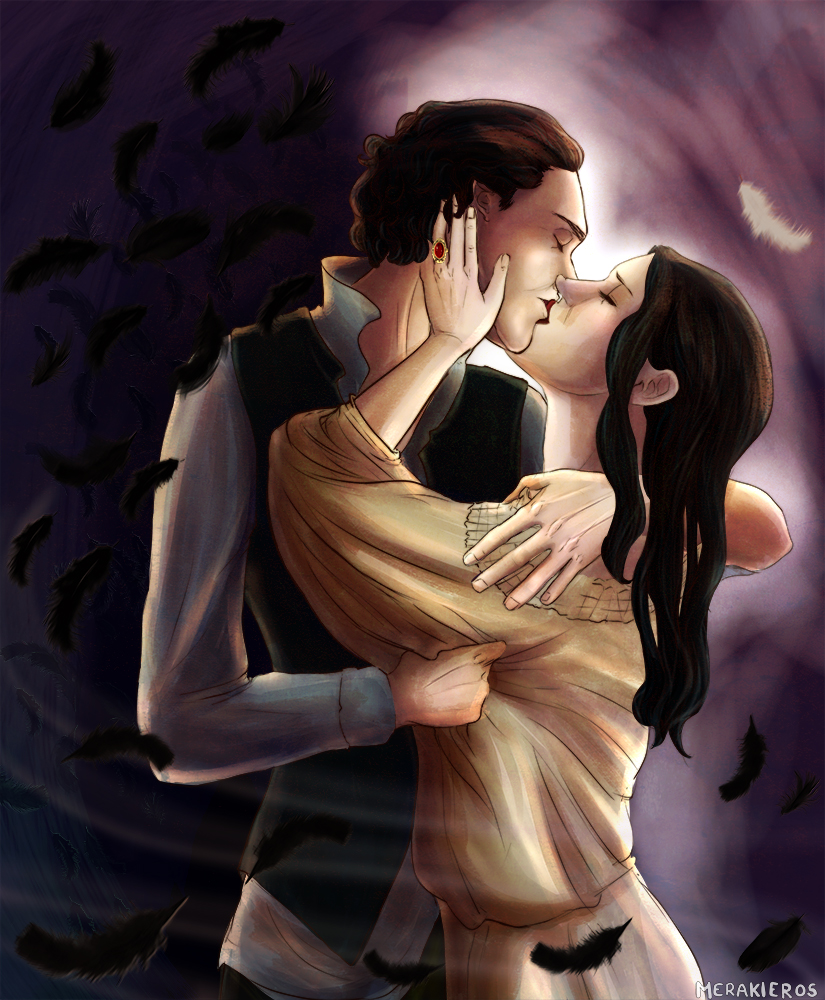 forgoodslothy and merakieros as well as 3 guests left kudos on this work! (collapse)