Okay, folks, I have big news. I thought this fic was pretty much done with me. That turns out to have not been the case. I didn’t want to announce this until I was sure I would do it, but … well, I’ve written another 100k of ever upward . This series will now be two fics longer than originally planned, bringing the total (not including the prologue) to seven novel-length fics.

To reiterate: this series remains, even with the two new additions, entirely complete. This means, however, that I have occasionally put spoilers in the comments … notably one spoiler in particular. I’m sorry but I’m going to go and remove it, haha, because it’s actually a plot point that comes up now, which I thought it never would. It also means that some further things I’ve said in the comments about the future of the characters/fic, while they aren’t spoiler-y, are now false. So just keep that in mind : )

One last thing: with an additional 100k words, twice-a-week updates would take 11 months. I'm switching the update schedule to Sundays, Tuesdays, and Thursdays! Hopefully I'll be able to edit at that pace.

Anyway, this author's note is longer than the actual epilogue, and a lot of you have been waiting many, many months for this. So, without further ado, read on!

“Snakeheart. How were your travels?”

“Hard.” Harry pressed his hand to the spell barrier, hard enough to turn his fingers white. “Why didn’t you stay in the deeps?”

“After your siblings died. Why didn’t you stay? Why did you come up here?”

“What happened out there?” the basilisk asked. “What makes you ask this?”

Harry wanted to say the werewolf, but it wasn’t true. It was Hagrid, Hagrid’s words, Hagrid’s plight. Hagrid, who had taken the blame for the basilisk, who was not to blame at all, because it all came back to Riddle.

But it was more, too. Everything he learned about the wizarding world made him think he didn’t want to be a part of it.

His heart ached. “Why did you leave?”

The basilisk nudged its head into his side. “I felt life above me. Life of a kind I had never known before. Quick life, fierce life, that blazed like fire. The kind of life I feel in you.”

“Even when that life did this?” He curled his hand into a fist against the spell, breathing hard.

The basilisk pressed its nose to the curse, eyes closed. “Even then,” it said quietly. “For that life will undo it as well. Won’t you?”

There was a lump in Harry’s throat. “Yes,” he said, leaning against the basilisk’s head. “I will.”

Harry let out a slow breath, gently tracing the basilisk’s scales, when he heard a rustling. “Did you hear that?”

“I think so; I’m afraid to look too closely in case I kill it.”

Harry peeked into the hall. A strangely familiar ball of fluff was circling around the room.

“Oh, I know him!” Harry said in surprise. “Pip!” He held out his arm, wrapping his robe double around it.

Pip landed, claws still pricking him through the layers, and gave him a look that suggested this was the worst place on God’s green earth for an owl. There was an envelope clutched in his beak.

“Er.” Harry took the envelope. Pip gave a grateful squeak, rubbed his head against Harry’s chin, and took off, winging back out of the hall. “Weird.”

Harry looked at it.

“It’s addressed to me,” he said nervously. “Someone knows where I am? What’s the Chamber of Secrets?”

“That’s what Salazar used to call this place,” said the basilisk. “I always thought it was very dramatic. Don’t panic yet. See what the letter says.”

With trembling fingers, Harry opened the envelope and slid out the parchment.

We are pleased to inform you that you have been accepted at Hogwarts School of Witchcraft and Wizardry. Pleased find enclosed a list of all necessary books and equipment.

Term begins on 1 September. We await your owl by no later than 31 July. 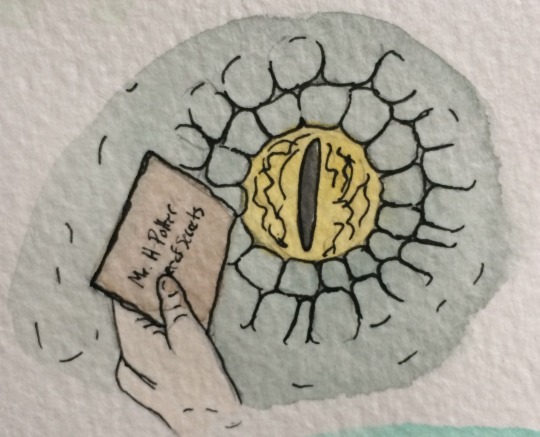 “That’s what Salazar used to call this place,” said the basilisk. “I always thought it was very dramatic.”

I'll see you Tuesday for the first chapter of part IV: down the path untrodden

(also: I tried so hard with html to change the font of the letter, to no success. No matter what I tried, it seemed to erase the coding and only display the pain text. Anyone have any advice?)