etch the ocean into my soul like a guiding light

There is a numbing hollowness at the center of Luffy's chest.

Then, he meets Zoro.

Hi, can my brain please stop giving me new ideas while I'm still writing another fic. Thanks. Oh my gosh, why did I write this? This is my very first soulmate fic, in like ever.

Anyways, I hope you enjoy reading this.

And while you all do that, I gotta get back to working on that long one-shot. Haha. 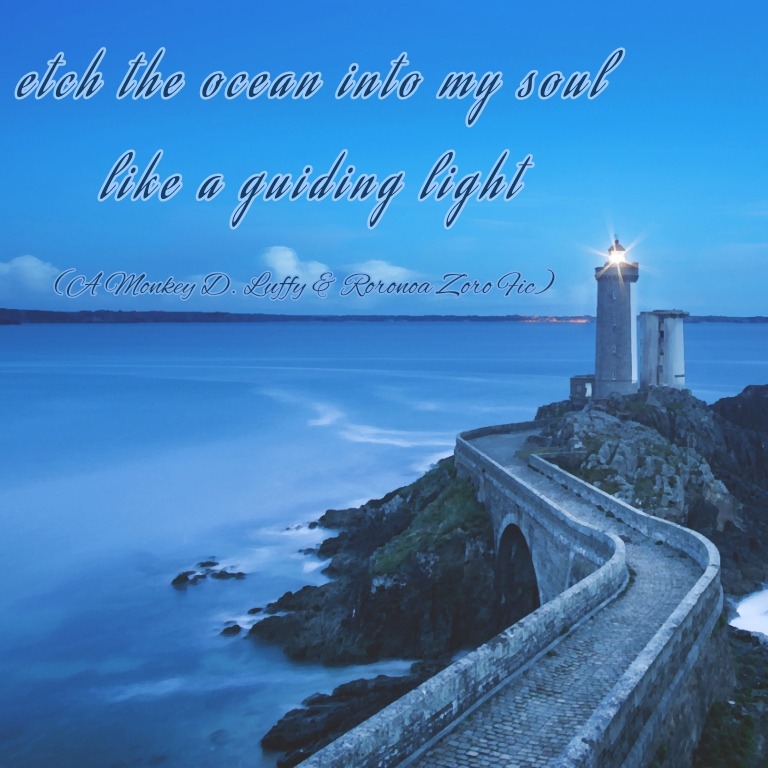 Luffy is born with a half-empty soul.

It's something that he has known all along, just as he knows that he wants to be the Pirate King.

He's heard stories of it before, of people with hearts that are neither brimming nor barren, of people who only become whole after meeting the ones that carry the other half of their soul. Some of them, Shanks says, have marks to help them find those who will complete them, others have colors, even heart songs, and then, there are those who have no color or mark or heart song, who only rely on their own feelings and instincts.

Shanks also tells him that halves often marry each other but not always. Halves can be many things: a lover, a partner, a close friend, even a rival. The sea is vast, the sky is wide, and love is different for everyone.

Luffy still understands very little, but what he does understand is what it means to have half an empty soul.

"Luffy," Shanks kneels in front of him with a flower behind his smile, "all it means is that you will never have to be alone."

The mayor calls them destined ones.

Makino refers to them as soulmates.

Luffy wonders if it's the same for him.

Maybe it is. Maybe it isn't. In the end, Luffy doesn't let it bother him much. The lack of half a soul will never hinder his ambition, will never make him stop dreaming. He will still be the freest man in the world.

So it doesn't worry him.

It just means that someone out there is waiting for him to find them.

You are mine, and I am yours. I'll become a pirate, and I will find you.

It doesn't worry him, but it still leaves him lonely and longing.

Luffy doesn't meet his half when he moves to the mountains, but he does meet Ace and Sabo in the form of blazing fists and metal pipes.

The beginning of their tale is rocky, but Luffy, tiny and still so weak, is never one to give up — how can he be king if he surrenders at the smallest of bumps? what will his other half say? — and his stubbornness pays off with a reward far more valuable than any jewel or gemstone. He has found friends, and soon after, brothers who are tied to him not by blood but by a stolen bottle of alcohol and three round sake cups.

Ace's practiced politeness and Sabo's quick wit doesn't complete Luffy, but their smile helps ease the feeling of longing beneath his bones. But too soon and too early, Sabo is gone, consumed by flames and lost into the ocean.

Luffy may be a child, young and naive and stupid, but he understands that the feeling of being torn to shreds is what loss feels like.

Then, he thinks of Ace and his grandfather. He also thinks about Makino and Shanks, and all the people he has ever loved and is yet to love — his future crew and a stranger that's not really one, who's surely waiting for him somewhere out into the vast blue sea — and realizes that he needs to hold onto the things that matter.

Ace turns seventeen, and Luffy watches his brother's strong back disappear to where the sea and sky meet as he begins a journey to fulfill their promise.

Without the presence of the woven gold of Sabo's hair and the dusting of stars across Ace's cheeks whenever he wakes, the haphazard stitching meant to close the hole in Luffy's chest breaks with a snap, and the fissure in his heart that never went away yawns wider than Luffy can ever recall it doing.

It's suffocating, this loneliness that he has yet to wash away, and Luffy desperately clings to the comfort of the knowledge that it's something that's not bound to last.

Luffy waits three years — it's only three years, yet it's still three years too long —  before he sets sail into the wide-open sea, dark eyes fixed on a horizon far beyond the end of the world.

There is salt in the air and freedom in the waves as the beginning of an adventure rings loudly in his ears, a call that he has longed to follow ever since he's learned how to walk, and although Luffy knows not of the south and the north nor can he differentiate the east from the west, there's a tugging inside his chest, strong and solid — it tastes like unwavering loyalty soaked in steel and blood — that beckons him forward.

(Hurry up! I've been waiting for you.)

Luffy laughs and lets the tides pull him where he's supposed to go.

Shell's Town is a hamlet of dust and harsh sunlight, quiet and sleepy in the middle of an ocean that's only a fraction of the first step to a dream.

There are food stalls on either side of him, and the tall concrete of the marine base towers at a distance, but Luffy cares for neither. Coby also continues to blabber next to him, yet Luffy's attention is on somewhere else entirely — the half of him, the one that's supposed to be empty, throbs unforgivingly that it's hard to breathe.

It feels demanding, and Luffy places a hand on top of his hat, holding onto it as he runs with only his heart as his guide, knowing that he can finally leave all the days, all the years of raw and aching loneliness far behind him.

Luffy will never be alone again.

So he laughs as he kicks up dirt like a hurricane, the pull in his soul carries him forward and his sandalled feet take him to the center of the marine base where he finally sees him .

The infamous Pirate Hunter, the Demon of the East Blue.

He is tied to a post in the middle of a sandy marine base, covered in grime and bruises of violet and yellow. The silver of his eyes and the green of his hair peeking out from his bandanna seem out of place in the bleakness surrounding him.

The gaping void inside Luffy burns .

It screams and it chants —

— and fills up completely.

This is Roronoa Zoro.

Luffy inscribes the name on to his tongue and skin, tucks it in his heart where all the important things are guarded so very carefully and so preciously.

Then, Zoro's eyes — steel and strength reflected in sharp silver — lock into Luffy's very own, and Luffy can't see anything else anymore.

It takes Luffy approximately five seconds to determine what kind of person Zoro is and how much Luffy needs — wants — him.

"I'm not going to die here," Zoro grins, body broken and spirit unwavering. His eyes are hazy, and there is blood in his mouth, but there's an entire mountain of ambition behind his words, and Luffy knows.

I can't be the Pirate King without you.

It's only fitting, Luffy thinks then, that the one who carries half the weight of the future Pirate King's soul is someone so sturdy and unshakable.

Luffy tells Zoro that he's going to be part of his crew. Luffy doesn't ask. He never asks. He takes and takes and takes and never ever in between. So he declares Zoro as his swordsman — Zoro has been his long before he knows his name — and offers him the world.

Luffy is gluttony and greed shaped like a pirate. He is selfish as much as he is possessive. King to be and an unstoppable force of nature who doesn't take no for an answer. He is Monkey D. Luffy, born without the half of his soul, who is now complete, who has waited for this moment forever , and who will pull the sun and stars down and fold the universe in two if that's what it takes for Zoro to stay with him.

You complete me. Join me.

It doesn't take Luffy long. Fate holds no power in Luffy's hands, and Luffy always, always , gets what he wants.

"I'll join your crew," Zoro vows then and there, and every part of Luffy soars.

Their first battle together goes exactly like how Luffy imagines it will be, the rubbery force of his fists followed by the deadly song of all three — three! — of Zoro's blades, two halves of the same whole, two pieces cut from the same puzzle that seamlessly fit together. There's a familiarity in the way they move as if they have been fighting side-by-side for a lifetime instead of a fourth of a day, and Luffy can tell that Zoro's thinking the same.

You belong next to me.

"Thanks, Zoro," Luffy gives his swordsman a smile that's victorious and devoid of loneliness.

"No problem, captain ," Zoro says with a grin that's wild and free and a sword of promise between his teeth.

And Luffy, with a heart that's overflowing and a soul that's finally — finally — complete, knows he's going to love Zoro even until he can't love anymore.

- I am so weak and so soft for Zoro and Luffy's relationship and how they're on the same wavelength and how they just complete each other.

- I like to think that Luffy loves everyone in his crew, but Zoro is always special.

- Luffy will forever be that one unstoppable force of nature that will literally take you down if ever you stand in his way.

- Also, Luffy? He feels so strongly, I just cry.