Do you ever need a fix of Family Guy Cutaway Gags?! Well, I'm your Black Tar Heroin dealer!
(HEADS UP!!! Had to delete a bunch of tags, so all the shows and characters in here are not shown in the tags. Don't worry though, there are still SO MANY characters in this crazy story) 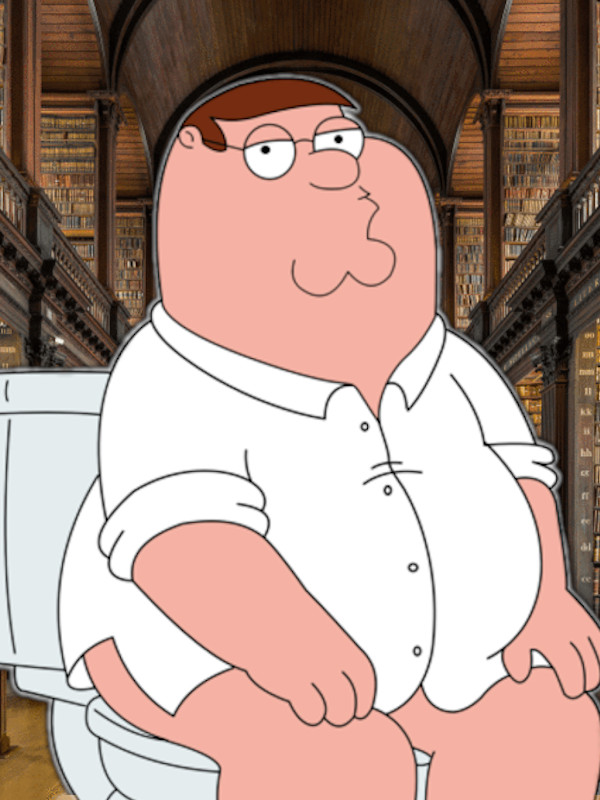 Peter and Brian sat in the living room, watching TV. Well, Peter was watching TV, while Brian had overdosed on cocaine. Chris had walked into the room to see who took his cocaine.

Peter and Chris eagerly watched on to get their fix of whatever crazy stuff the news had for them.

“A Local Internet Critic has been hospitalized after two park workers ran him over in their golf cart.” Tom explained.

“That’s right Tom, Doug Walker, or better known as ‘Nostalgia Critic’, was run over while doing a shoot at said park. Let’s go live to Tricia Takanawa, who is on the scene. ” Joyce Kinney added.

“Joyce, the cops have apprehended Mordecai and Rigby. The two Park workers swear that it was an accident.”

The camera panned over to Mordecai and Rigby being handcuffed by two buff shirtless cops.

“I swear! This wasn't an attack on him!” Mordecai cried out.

“Yeah! We were just fighting over the steering wheel!” Rigby added.

The cops threw the two against their car and began frisking them.

“Uhh Ohh, it looks like we're gonna have to do a full cavity search!” giggled Officer Blacked.

“Yeah! They don’t even have pockets! Who knows what they could be hiding up those pretty butts of theirs!” Officer Whited added.

Peter laughed even harder and had to stop to catch his breath.

*Heavy breathing* “Ohh, Chris!!! That’s so true!! And wow, they ran an Internet Critic over. You know, this reminds me of the time I met Mr. Enter.”

Mr. Enter was in his room, recording another Animated Atrocity. He decided to once again go after Family Guy. This time though, he wanted to focus on Peter.

“What do I even say anymore?! Peter can’t go any lower at this point!” Mr. Enter raged while punching a picture of Butch Hartmans face taped to a punching bag.

Mr. Enter momentarily stopped recording to focus more on Butch Hartman. Peter Griffin was starting to throw Mr. Enter into a state of uncontrollable rage and the Picture of Butch Harman wasn’t helping either.

Just as he was about to get back to recording, Peter came crashing into Mr. Enters room, while driving the Peter Mobile.

Peter Jumped out and landed perfectly on his feet. His vehicle continued crashing through Mr.Enter’s house with no sign of stopping.

“Alright Mr. Enter, Seth and Butch are getting sick and tired of you trashing their good names.”

Mr. Enter got to his feet and stood in confused fear.

“Listen, buddy, I don’t like stickin things in guys either. So let’s just make this quick.”

“What?! WHAT THE FUCK IS GOING ON?!?!” Mr. Enter screamed while looking around.

Mr. Enter fell to the ground while continuing to cry out in pain. Peter watched on happily.

“Hahahahahahaha.” Laughed Peter, knowing that his video would get big hits.

The Screaming and panic continued for a good 4 minutes. Just as Peters Video was about the reach the 5-minute mark, Charlie Sheen knocked Enter out with a lamp.

“What the Hell Charlie Sheen from Two and a Half Men™?!”

Peter looked down while angrily sighing.

“Fine, but you're only getting two 8-Balls of coke!”

Charlie Sheen was a bit pissed but accepted the punishment.