Sometimes it’s like this - they’re doing fine, and their day is going well, and Sam is laughing at something Dean said, and he has that sparkle in his eyes that Dean loves, and Dean’s chest feels light and airy, and the future looks good.

Written for the Sam Winchester Prompt-a-Thon.

Description of image: pencil drawing. The atmosphere is shaded and dark but light shines from above and to the left. Sam kneels naked on the floor, shoulders hunched. A naked Dean crouches to meet him, grasping Sam face to lift him into a kiss. Sam grips him back with tight desperation. (can be gen or explicit as desired)

inspired by this gorgeous piece of art!

title is from the song "prendi fiato e ricomincia" by don bacco which i have not actually listened to, i just liked the title. if you're interested, it can be found here. it's italian, and translates to "take a breath and start again."

mild spoilers up to the end of season 13.

Sometimes it’s like this - they’re doing fine, and their day is going well, and Sam is laughing at something Dean said, and he has that sparkle in his eyes that Dean loves, and Dean’s chest feels light and airy, and the future looks good. Dean can see through the decades with a clarity that borders on clairvoyance, and he can see himself and Sam, exactly as they are right now, but with more silver in their hair, with laugh lines, the touches of a life well survived.

Sometimes hunts go smoother than expected and they don’t get so much as a scratch, and Dean drags Sam into the shower and kisses him against the cracked motel bathroom tiles, and Sam smiles into it just before sinking to his knees, and makes Dean see stars. They sleep curled together, sated and content, and the next day Dean buys them breakfast, and sings along to the music on the radio, and Sam reads in the front seat with the straw of his milkshake pressed between his lips.

And the sun seems brighter, the road looks gorgeous, and the music sounds better, when it’s one of those days. Dean stretches his arm across the back of the seat and plays with Sam’s hair as he drives. Sam leans into it and basks in it but doesn’t take his eyes off his book. The road is long and the music is good and Sam is beautiful in the sunlight, and Dean can see the future, and it looks good.

But then sometimes it’s like this - they’re not the only ones on the hunt, and the other hunters don’t like them, because no one is willing to look past the Apocalypse even a decade later. And someone says something to Sam, snide and passive-aggressive, and Sam shuts down even though Dean defends him, and his eyes lose their glimmer, and Dean’s chest feels tight with rage.

“Didn’t have to start a fight, Dean.” Quiet in the motel room, fingers reverent as they clean Dean’s knuckles.

“Wasn’t gonna sit and listen to that crap.”

“I deserved it.” Ashamed and guilty.

They finish the hunt as soon as they can, and no one talks to Sam unless it’s absolutely necessary, not even when Sam saves all their asses. Dean seethes and Sam stays silent and doesn’t wait for thanks that he knows will never come.

“I had it handled. Didn’t need Satan’s bitch to come help me out.”

Dean punches him in the mouth, because Sam won’t.

“Except that it wasn’t not my fault.”

Sam looks up at that. “You were being tortured. You can’t possibly be held accountable for-”

“And you were being manipulated by someone who promised to help you,” Dean cuts in.

“Not the same thing, Dean. I should’ve known better.”

“And I should’ve held out. Dad did, for a hundred and twenty years.”

“Point is, Sam, it doesn’t matter anymore. You’ve done your time. Which you didn’t deserve, either, but I’m not having that argument right now, man.”

Sam smiles. Not close to full, but real. “Thanks, Dean.”

Dean smiles back. “‘S nothing, Sammy.”

Sometimes, that’s the end of it. Dean tries his best to make it so. He takes Sam to bed, and strips him slow, kisses down his body, and takes him apart with his mouth and hands. He makes Sam forget, thrusts into him until all Sam knows is his name, an endless litany of “Dean, Dean, Dean…” until he’s shaking, falling apart as he comes.

And Dean kisses him after, too, when they’re clean and curled together. And Sam kisses him back, soft and reverent and grateful, like he’s the one who should be thankful instead of Dean. Like he doesn’t know the way he takes Dean’s breath away sometimes, when Dean looks at him and can’t believe how he got this lucky.

And they fall asleep, and the world restarts in the morning, when Sam smiles sleepily at Dean and puts his head back down on Dean’s chest for five more minutes.

Sometimes Dean wakes up in the middle of the night to the sound of Sam crying, and he turns on the lamp to find himself alone in bed, because Sam is curled in the furthest corner of the room, sobbing into his arms. And he’s saying things that hurt Dean to hear, he’s begging, and he’s crying like he’s got nothing left to live for, and when Dean crawls over to him, he doesn’t see him.

“Please,” he whimpers, and Dean knows he’s in the Cage again. “Please, please, not again, I’ll be good, I swear I’ll be good, please-”

(Dean wants to know what it is that Sam sees, exactly, but he never asks, because he is a coward.)

Shaking hands on Sam’s face. Sam doesn’t look him in the eye.

Sammy’s not home right now, try again later. Dull eyes and hoarse pleas and blunt nails scratching the hell out of his own skin, trembling fingers tugging so harshly at his hair he pulls some of it clean out.

Dean’s scared. He’s terrified, always is when Sam is like this. Doesn’t know if his luck’s finally run out, if this is going to be the time he fails to bring his brother back.

“Sammy, sweetheart, please-” Arms around Sam, dragging him out of the corner. “Just look at me, Sam, please, you’re safe, I swear to you, you’re safe-” Dean is begging, too.

Sam reaches out with shaking hands, grabs Dean, holds on. “Please,” he begs. Still not awake. 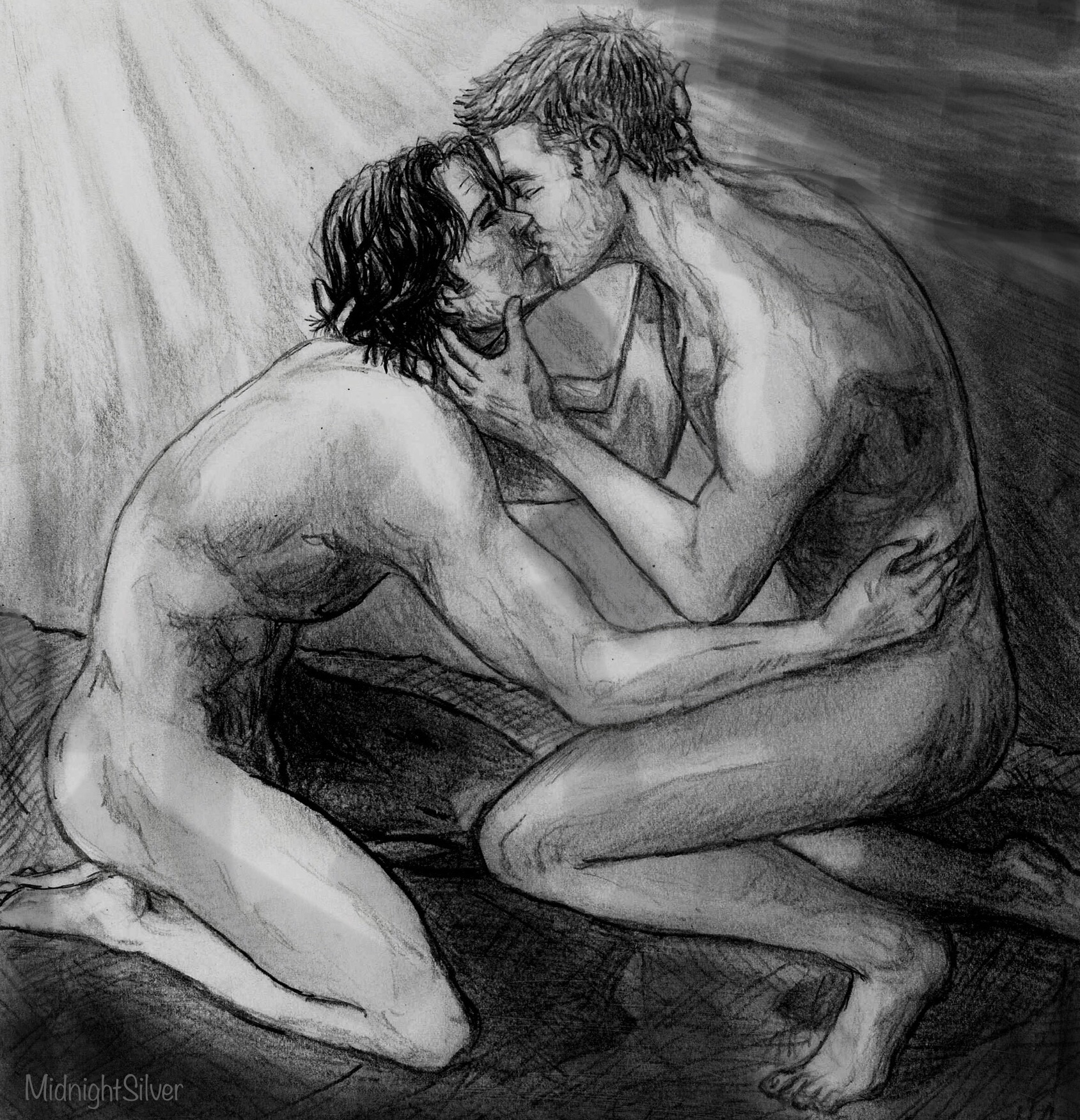 “I’m here,” Dean tells him, and kisses his forehead in desperation. “I’m here, Sammy, I’m here-” Kisses the bridge of his nose, his cheekbone, his mouth. “You’re safe, Sam. I’ve got you, I’ve got you-”

Sam’s body goes loose, hands slack on Dean’s skin. He’s warm all over, feverish almost, and his eyes are wild as they search for Dean.

Sam leans in. Lets Dean hold him up. Closes his eyes when Dean kisses him again. “Sorry.” So quiet Dean almost misses it.

“Nothin’ to be sorry for, Sam. Didn’t do anything wrong, baby.” Kisses his hair. “You all right?”

Best he can hope for, when Sam’s had an episode like this one. “Wanna come back to bed? Gotta be better’n the floor, huh?”

He helps Sam up, practically half-carries him back to bed. Sam curls into his side as soon as they’re both horizontal.

“C’mere.” Dean stretches his arm out.

Sam curls in further, presses his face into Dean’s neck. Heart faster than a rabbit in a snare, fingers desperate as they clutch at Dean.

Still wouldn’t come close to what Sam’s worth.

“Wanna talk about it?”

That’s just fine by Dean, because Dean is a coward. Easier to wrap his arms around Sam, to kiss him, to hold him close. He doesn’t know it, but he’s worth more than the world, more than the entire damn universe.

Sam falls asleep, eventually, heart slowing down, breaths deep and even, warm against Dean’s skin. In the morning he’ll be tired, and he’ll be quiet, but he’ll be safe, and he knows it. It’ll take some time, but he’ll be all right again.

Dean remains awake. Sometimes, when it’s like this, it scares him. It feels like there’s not enough road left, like he’s going to have to go slow or it’ll end and he’ll- he doesn’t know. Lose himself. Worse, lose Sam. He doesn’t know.

The Sam that laughs at his jokes and smiles brighter than the sun feels like he’s from another world. The Dean that can see the future feels like he doesn’t exist. The night feels darker, more evil, more infinite. The world presses down on them, boa-tight around Dean’s chest till he’s gasping for breath. There’s too much of it and there’s too much evil and Dean can’t kill it all even if he lives to one hundred and fights to his last breath. Nothing he does will ever be enough to keep Sam safe.

And then Sam moves in his sleep, presses his body further against Dean’s like he can’t bear even a millimeter of space between them, and Dean can smell his hair, and his skin, smoke and sweat and the hint of strawberry from his shampoo, and it opens his lungs more than all the air in the world ever could. And he remembers that Lucifer is dead, and the Cage is nothing more than a nightmare, because Sam will never ever step foot in there, ever again. And Alastair is gone, and Hell is nothing more than a nightmare, and nothing any of them do, angels or demons or vampires or wolves, could ever hurt either of them.

The future isn’t always clear. Even next week isn’t assured. But Sam is warm and safe in his arms, holding on to him like nothing matters more to him than Dean. And they’re safe.

And in the morning, Sam is going to be tired, and quiet, but he’ll be safe and he knows it. And he’ll smile at Dean when he wakes, and kiss him, and then he’ll put his head down on Dean’s chest and ask for five more minutes. And Dean will smile back, and agree, because if it were up to him he would stay here forever with Sam in his arms, and five minutes is nothing in the face of that. And then they’ll have breakfast, and then they’ll be on the road again, and it’ll take some time, but eventually Sam will laugh at something Dean says, and he’ll have that sparkle in his eyes that Dean loves, and Dean’s chest will expand, and he’ll be able to breathe again.

And the world will restart.

please comment and let me know what you thought! i can also be found on tumblr @thelegendofwinchester.