“Why does Russia have to be so cruel?” Lithuania questioned.

“I’d rather be with Germany than Russia!” Latvia responded.

“No way! Germany is just as bad!” Estonia cried. 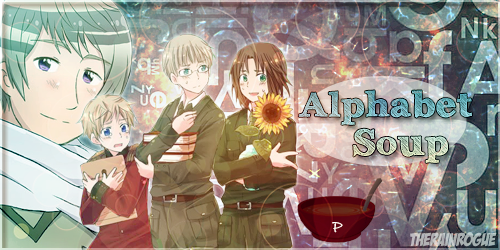 “Why does Russia have to be so cruel?” Lithuania questioned.

“I’d rather be with Germany than Russia!” Latvia responded.

“No way! Germany is just as bad!” Estonia cried.

“No, he’s not! Germany isn’t half as cruel as Russia. Just look at how he treats Ital,”

“You guys shouldn’t be so loud!” Estonia shushed. “He might hear you!”

For some unknown reason, the Baltics failed to notice the colorful animal sitting in the corner of the kitchen. Little did they know, it would be their downfall.

You and Russia entered the kitchen, standing in the doorway. Silence fell over the kitchen instantly. Lithuania and Estonia just stared, while Latvia began to shake uncontrollably.

“What’s up, guys?” you chirped, happy to see the three men. Russia just smiled, his hand tightening slightly around your own.

The three Baltics turned pale and gulped. Why the hell hadn’t they noticed that brightly colored large ass bird sitting in the kitchen?!

A dark aura surrounded Russia and, even though his smile remained, he was pissed and the three knew it. They could feel the murderous aura rolling off him in waves. The three started to shake violently as they tried to come up with an excuse as to why the parrot was saying such things about him and who could possibly be responsible.

“Ugh, you guys might wanna run…” you suggested before throwing your arms around Russia’s middle, to try and prevent him from committing a triple homicide.

The Baltics learned to despise parrots that day. Since then, they always check the room before they utter a single word.