The End of the World

This was written a while ago, for Smutlander’s prompt ‘First kiss’, and I just realised I had posted it only on Tumblr. I hope you enjoy it! 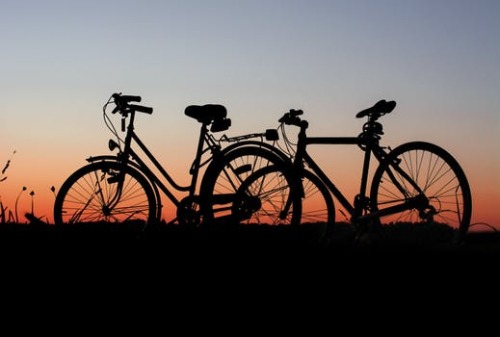 She was looking at him, her slanted blue eyes glimmering under the morning sun, the tilt of her head challenging him.

‘Your friend, Jenny Fraser,’ he amended.

Ian shrugged, as nonchalantly as he could, and moved his bicycle towards the gate of Lallybroch.

Alone with Jenny for the whole ride.

When had things changed?

He could remember her around since he remembered himself. Playing in Lallybroch’s garden, telling stories in the big living room, going to school together with their bags heavy on their shoulders. She was there to correct his mistakes in English, he was there to help her with Math. He saw her crumble at her mother’s funeral and held her small frame when Jamie’s attention was on their da. He saw her mourning and he offered solace, silent and patient, waiting for the hidden sobs inside her to emerge to the surface. She should be the strong person in the house, to support her men. But with him, she just needed to be herself.

In all their lives, their feet stepped next to each other leaving parallel traces as they discovered the world. She was his friend and his best friend’s sister, always a companion.

Until one day, he passed by her bedroom on his way to Jamie’s, and he saw something totally different. Not a daughter, a sister, a friend. She had become just Jenny. Her cheeks were flushed, and she was staring at the painting on her easel, a brush hovering indecisively over the canvas.

That quiet September afternoon, Ian’s heart banged so hard against his rib cage that he thought all the house had heard it. And from that moment, he couldn’t look at her without running a hand through his hair while trying to play it cool or wracking his brain to find something to say to Jamie, just to take his eyes off her.

He was playing with fire and he knew it.

Looking over his shoulder, he saw her dark hair flying around her face, her mouth curled up in a soft smile. It was their first Sunday ride without Jamie, who had stayed back at home burning with fever in the middle of summer. Biting his lips so hard that it was painful, he turned his gaze away from her.

They rode their bikes slowly on the uneven road, frightening the birds in front of them and raising clouds of dust behind. He let her ride in front of him when the path got narrow, and he forgot to breathe, looking at the proud posture, the narrow shoulders, the slim waist, the round ass…

Focus, mate. Check the trees. Trees are safe to look at.

Although safe, trees were boring to look at, and Ian’s gaze soon traveled back to her with ease, as if she was the only one who deserved being looked at.

“What’s up?” She asked, decreasing her speed to ride along with him once the path got wide again.

“Nothing,” he said, eyes fixed on the road, feeling his cheeks burn crimson.

“Race to the creek?” She asked and sped up, her mischievous blue eyes and sleek dark hair capturing his attention together with his heart.

“Not fair!” He shouted his objection and followed her with a huge grin.

She went down the hill, her feet pedaling fast, as if she could ride the wind. He didn’t care if he’d lose the race - lose everything - just to listen to her laugh. That joyful sound that made the bird’s melodies sound like a cacophony in his ears.

He saw it all. The wheel trembling under her hands, the rock standing arrogant in the middle of the path and the pothole sly at the side, the bike losing traction. Jenny on the ground.

Her surprised scream made his heart stop.

Her name came out of his mouth a frightened shout. She raised her head and found his eyes, fingers curling around her ankle, unshed tears in her eyes. Ian rushed to her side, kneeling.

“God, Jen,” he whispered, taking in the blood on her hands and knees. “Are ye alright?”

“Aye, 'tis okay. I’m fine,” she said, while checking if she indeed was. “Just got scared.”

He moved her hair away from her sweaty forehead and cleaned her scraped knees and the palms of her hands with water. Once he was done, he took her in his arms, and leaving their bicycles behind he started walking back to Lallybroch. Her hands were twined behind his neck and he could feel her soft breath on his neck, the thin frame in his arms, the scent of flowers in her perfume. It was about three minutes later, that she demanded he let her walk. Ian was adamant at the beginning. But she kept talking. And talking.

“I’m telling you this for the last time, Ian Murray. I’m fine! 'Tis naught but a few scratches, is all.”

With a frustrated huff, he lowered her down, making sure she could stand on her feet. She did but didn’t take her hands off him.

They were close. He could almost feel her breasts brush against his chest, her breathing fast and shallow. His hand settled on the small of her back as if on its own volition, pulling her closer.

And still not close enough. Jenny raised her head, blue eyes looking at him in a way they had never done before. Unbarred and vulnerable and yet, so strong.

Swallowing the fear and the panic that stuck in his throat and ignoring his clamorous heart, Ian bent his head slowly and took her bottom lip in his. He lost half of his life in the seconds that took Jenny to open her mouth, her fingers winding through his hair to keep him in place. He lost the other half when he felt her tongue searching for his.

That was it. It was the end of the world as they knew it.