Doodles and a voice mail at night. 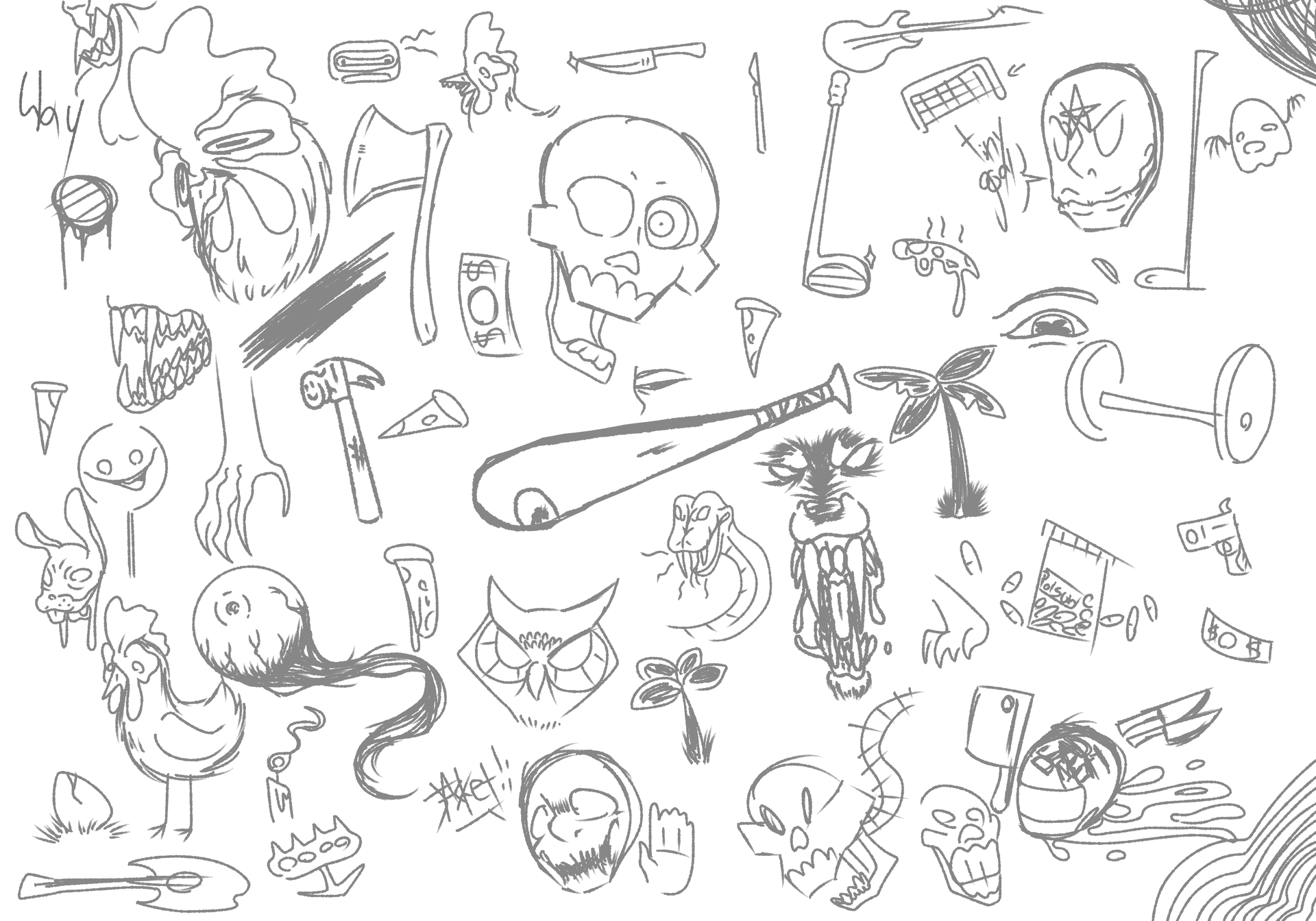 Who should I bring when the time comes?
When the phone rings?
Should I bring my bat? Knife? Or Uzi?
How many will I be dealing with?
Are the cops smarter this time than the ones in Miami?
Will I cause trouble for the gang?
How much blood will be shed?

I think 'Wolf' may have told the others about 50 Blessings. Possibly try to see if they can track them down in Washington, which I doubt would work or be worth it.

It's best if they don't.
It's easier and safer if I play the game again.
Gain points and see if I unlock another weapon or mask.
How many points will I get for this level?
3000? 12450? 400? It depends on how many there are and how many ways I kill them without them touching me.

They whisper, but I can still hear them.
I wish I could've kept that stress ball I had in court, it helped to distract me from my surroundings, yet sometimes it looks like I'm about to pop it.
I doubt anyone could've kept their sanity's from how much stress and shit I've been through.
How much headaches and pain I suffered from, the voices, the hallucinations, the static, the colors.
I doubt 'Wolf' would've survived from all of that.

Near midnight, but I don't want to meet them again.
They'll only repeat their questions until I finally get it right. How long will I be guessing then?
Dreams are only for the ones who are normal or who have their sanity in check.
Dreams don't come easily to me, if I do, I only get static and hear distant screams of the ones I killed.
I wonder if my lack of sleep will be an issue, but I manage to work fine in the past, so this isn't any different.

The game begins, feeling the phone vibrate in my letterman pocket.
New Game save, the first level, will it be located in an apartment? two or three-story building? run-down building?
How many points will I get? What will my high score be? How many enemies are there? How many weapons? Melee or Gun? How many ways to execute?
Maybe I should bring back a souvenir from the levels I complete. 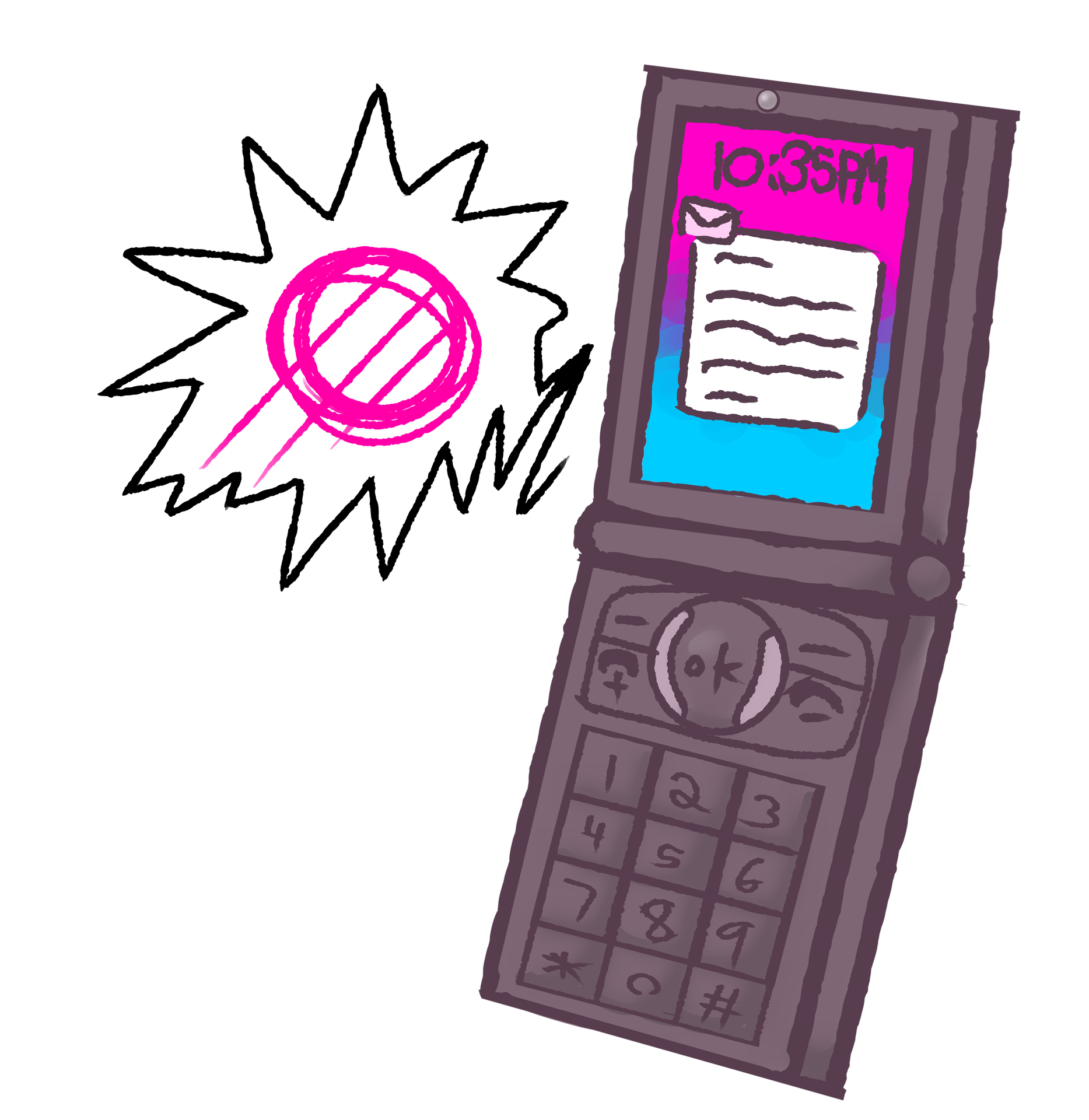 Ey! This is 'Doni' from college bro!
I've invited you to my birthday party, I hope you remember this special day!~
The party is at my new crib! The landowner allowed me to make it loud and fun!
Dude, Bring some snacks and booze! A lot of dude's and dudettes are coming over!
Oh! If ya want you can bring a +1! The more the merrier!
My place is at 'Webster Celyn 175 Carne street #104'

Don't be late! This place is getting packed!

The Burglar watches through the CCTV cameras, checking on the other heisters while watching for any other burglars or spies that dare trespass the safe house. What she wasn't expecting to see a chicken Sociopath entering the garage, passing the Anarchist who's busy with her own things to notice the chicken. Speaking of which, the Sociopath was holding a wooden baseball bat and an empty duffel bag. Heading outside and out the gate, heading to his car. Most of the heister's left to their own personal homes, some with families or just going home to sleep.

Though behind the Burglar, through the thin glass window, is the Mastermind Chief and the Ghost Rouge. Looking through files and paper for anything to help with the plan or simply wait for a call from one of the contractors for any new heists tomorrow.

"Anything happening on the cameras Clover?"
Said the Ghost. "Nah, nothing good happened, but our new member decided to get some fresh air and possibly doing a solo heist." She didn't turn around, knowing they can hear her through the glass, eyes still on the camera as she continues watching. Some members who are still at the safe house were still doing their own things, some yawned and some are ready to head back to their own homes or rooms. There a secret doorway that leads to a connected apartment building, which looks run down from the outside but clean in the inside, some windows boarded in, and the outside walls sprayed painted with words and doodles. The apartment has two floors, each wooden door leads to bedrooms assigned to heisters who don't have personal homes or families to go to.

"So that mute psycho decided to leave? Bet he gotten bored and decided to go kill a group of people.."
"Houston." Said the chief as he looked at his brother, looking a bit annoyed as he has to hear him complain about the new member. "I highly doubt he left just because he's bored. Clover, did he bring anything with him?"
"He brought his wooden bat and a duffle bag."
Houston looked at his brother, giving him an 'I'm-right' look. "He must've gone to do a solo heisting, stop giving me that look and stop complaining. He hasn't done anything wrong since he's been here and he did well during his first heist."
"It doesn't matter if he did well, he's still a psycho, the only thing we know about him is that he took out the Russian Mafia by himself and took orders from a fucking phone! He could just slaughter us before we know it if he hears a phone ringing!"
"What about Wick? He's basically done the same thing."
"He didn't take hidden messages from the phone and he talks!"

The Chief sighs and rubs his face, tired and done with the complaining. "Don't make me force you into a room with him and lock the door until you finally stop complaining Houston.."
"You wouldn't!" Gasp the Ghost. "He'll instantly slaughter me!"
"Stop being so dramatic, Wolf likes him and basically became friends with him. If Wolf can interact with him normally, then you can too."
"Wolf instantly became friends with because he's a maniac! Plus, he barely knows him and just became friends after interrogating a mobster!"
"Look, the new contractor we're gonna meet or know soon said that we have to find and take out the Commissar or any Russian mobsters for any info where Or which prison Hoxton is or being transferred to."
"Come on! I feel like that's their way for us to meet the guy and we haven't met this other new person yet!?"

Clover just simply listened to both brothers and kinda felt annoyed herself. She asked a question to the brothers, hoping it wouldn't add fuel to the fire Houston had started.
"Why not ask Wolf if he knows where Jacket is going? To see if he's truly gone out to just slaughter people."
Both the chief and ghost looked at her back through the glass.
"Houston. Go ask wolf."
"Hey!-"
"Go. Now. I still need to look through these files then clean up." He says as he stretches hearing some of his bones pop and gives Houston a big brother/leader look.
"Fine..."

Houston left the room and went downstairs to the main floor, taking another set of stairs that were closer to where Wolf and Wick's stations are. Coming down to the basement and taking a left and entering the training and tech room. Seeing that Wolf was still up and working on one of his turrets. Houston noticed that Wick wasn't here, he must've left home early than the others. "Wolf." the Technician jumps a bit from the quiet being broken around him as he turns around in his swivel chair to see Houston looking a bit annoyed and a bit upset. "Oh! Hey Hous! What's up?" Houston looked around, thinking of what to ask, despite him not wanting to talk about the new member. "Do you know where uh Jacket is going?" Wolf tilted his head and thought for a minute then shook his head "No. I didn't know Jacket left to be honest, even though his room is basically down the hall."
"Great. Thanks for answering Wolf." Houston sighed and turned around and left the room, upset.

Wolf noticed it and wondered what made his friend upset. Possibly from his answer? Or possibly from the lack of info they have on Jacket and how much secret and mystery he has. Luckily Wolf knows one thing and he didn't want to share it with Houston or the others. It's what friends do, right? Keep in friends secret until their courage and brave enough to tell the secret themselves. Plus, I don't think it would end well if he did tell them about what he knows, but he is curious where they sent his chicken friend. Wolf turned back around to continue working on his turret.

Thank you for the kudos and comments!
I wasn't expecting for this fic to get any attention, but thank you!
I'll try my best to bring up the next chapters.
Also, I apologize if I make some of the characters fo OOC.

Edit: sorry for the errors, I'll make sure to fix up the previous chapters while working on the next ones.