Hamel still isn't quite used to peace and happiness.

Written a long time ago for the fictunes challenge at insanejournal. The song I chose was "Frage" (Question) by the German group Eisbrecher. The song lyrics are very fitting for someone like Hamel, who, despite not being a bad person, still has very few redeeming points when it comes to being a functional member of society.

Hamel was the first to admit he was not a good father or a good husband; he was a little too broken, a little too childish, a little too irresponsible to be much more than an extra expense in the household, traipsing around while mocking himself, his wife and everything else out of boredom. Sometimes he would fish out the month’s economies and waste them all on bets and games; sometimes he would help the unruliest of his children harass their elders.

Sometimes he would sew; it was one of the few things he was good at – but the inherent girliness of sewing always bothered him, and he’d end up either putting the work down, or making something unwearable just to be contrary.

He could cook, but since most of his recipes involved roadkill, earth worms and otherwise disgusting things people who weren’t living in abject poverty would rather not put in their mouths, he usually spared his family the experience. Just because he could make it taste decent, it didn’t mean they would be happy to eat it.

Mostly, he taught the children music. It was the best he had to give; arguably, it was the only thing he had to give. He was a strict teacher and they were gifted students, and Flute was always enthusiastically helpful – maybe because teaching was the only way he could pass for any sort of authority figure to them. But he had music, and music was good and soothing and the children had fun.

The days in his new life were light and full of noisy brats running around, and visits from old friends, and sometimes he would feel irritated, crowded even, and blow up at things, demand attention and respect he never did anything to deserve, demand to be left alone. Then he would feel miserable and guilty about it, wandering about the house awkwardly figuring he owed someone apologies, without knowing how to give them. And most everyone was so damn patient, it would infuriate him all over again.

Then at night, maybe after a bout of sweaty horizontal dancing, or maybe after collapsing onto the mattress wearing the day’s clothes, he would drop an arm over Flute’s ribcage, watching the soft rise and fall of her chest intently. And sometimes his eyes would well up and he would silently bless everything in his line of sight and everyone his brain could come up with, remembering in painstaking detail the roles those things had had in their life, and the roles those people had had in setting them onto each other’s path. He would fondly smile at the memories of friends not-so-secretly trying to hook them up, and smirk at the memories of enemies trying to drive them apart but instead making them stronger. He would remember the unwavering courage she had showed him and given him in his battle against destiny, hug her, hold her close, kiss her brow, and settle down peacefully.

Sometimes, however, he would be swallowed by a darkness deeper than the night under the northern skies. His mind would replay all the times he had humiliated and abused her for his own petty amusement, the times he had thrown her into battle against her will, the times he had mocked her pain, brushed off her wounds; he would imagine how many times he had broken her heart with his emphatic denials, harsh words, jealousy-driven games and mockery; he would remember all the times she healed him – that soothing, warm, addictive feeling of god-given purity – when using that power meant a painful, early death; the red of all the blood she had lost would burn into his eyes, and he sometimes even could feel the memory of it as it flowed down his arms. And when his eyes closed – if they ever did in such nights – he would dream of her body crumpled in his arms, too frail, too breakable, of her red-soaked dress, and of the little flecks of coagulated blood and pieces of skin that were stuck under his nails for days afterwards.

Then, come morning, he would awake to a tiny hand pulling at his cheek, and a pink, round face grinning at him with very small, very white teeth. And, standing up, he would hear the sounds from the kitchen and feel the smell of breakfast, and see his wife stomping around with a noise like twenty elephants, in a sea of energetic children, eager to both help and hinder.

And then she would turn to him with a smile, and with a single look she’d lead him to the table, set some milky coffee in front of him, and the littlest one on his lap; and she would talk softly and idly about the morning news as she set the table quick and efficiently, and soon all the children would be sat down saying grace, while he wondered how he had ended up surrounded by so much when he deserved so little; and the question would remain even as the children’s laughter rang in his ears, and the atmosphere of peace seeped into his skin.

Then, as soon as the children were off at school or napping upstairs, he would turn to Flute with that question in his eyes, or even his lips; but even he, broken as he was, knew there was no answer, really.

So, when Flute kissed him, softly and smiling, and steered him to the sink, all he really could do was allow himself to be amused. 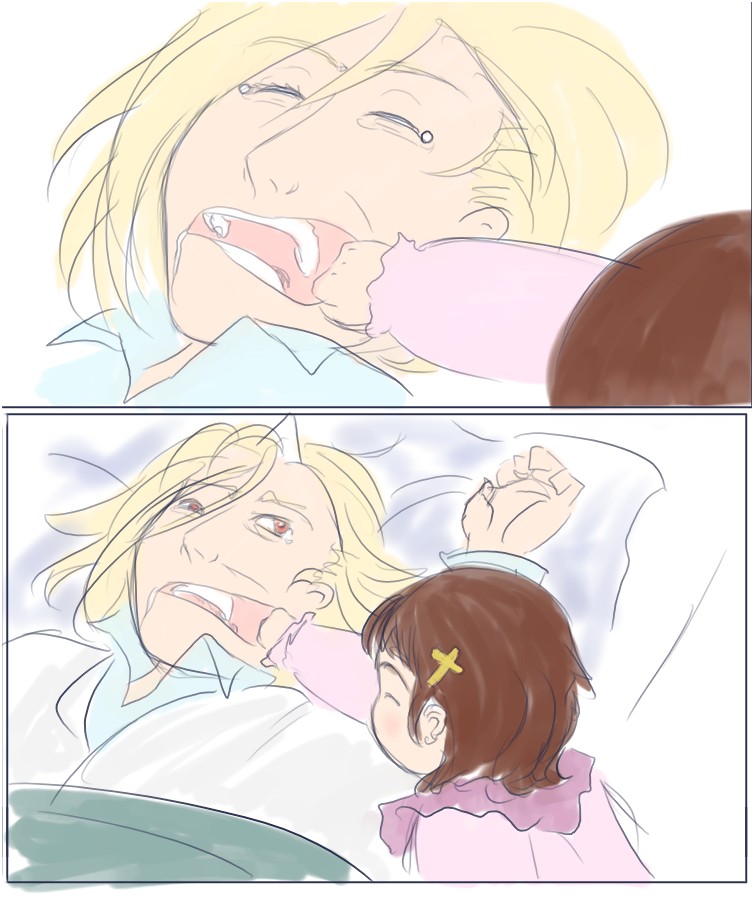 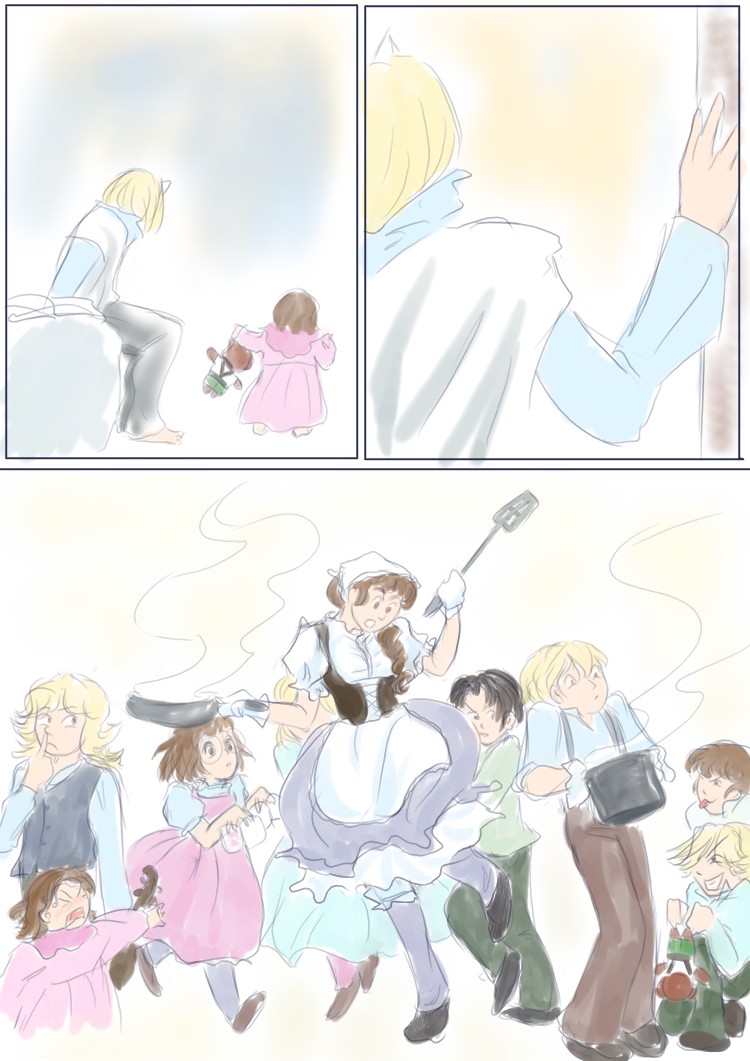