Hermione returns to Hogwarts as an adult to finish her eighth year. Headmaster Snape senses something is wrong with her and together with Kingsley Shacklebolt sets out to discover what has happened. Hermione is of age in this story, and it will be an eventual triad story between the three.

After a long battle with writer's block, I am re-writing the story slightly. You are welcome to re-read the updates as they come or wait for the next chapter. I am hoping to add new chapters shortly. Thanks for everyone's patience! 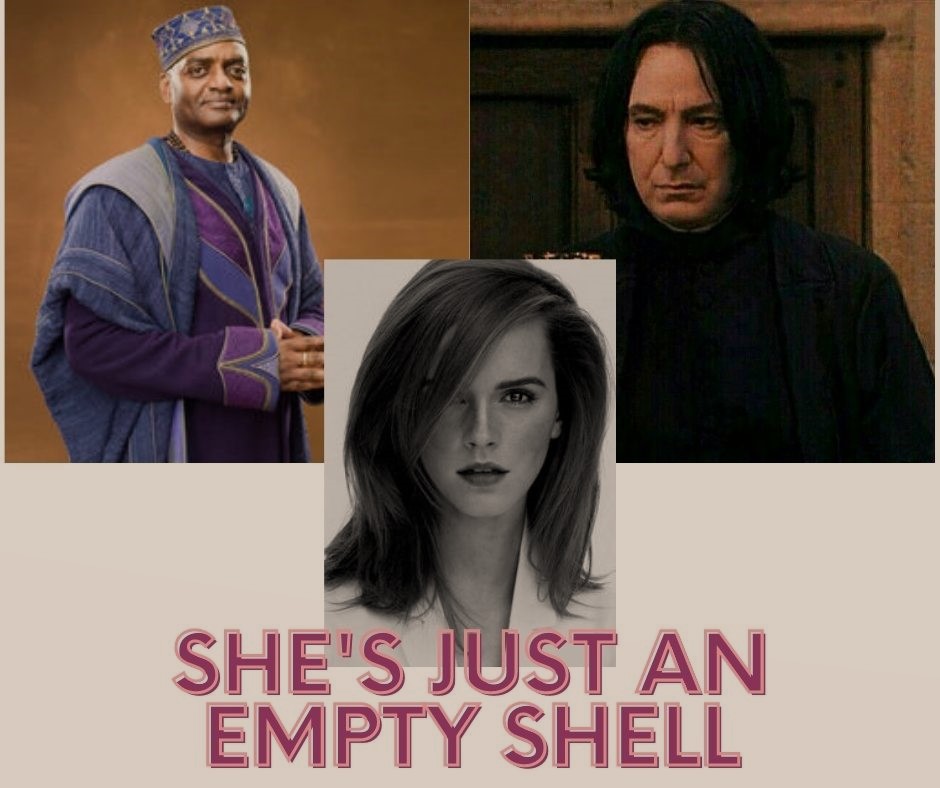 The devastating effects of the war had rendered Hogwarts inhabitable, and it took one exceptionally long year after the Final Battle for enough funds to be raised to procure both materials and manual labour to repair the majestic old building. Magic was only able to do so much.

The previous Headmaster, Albus Dumbledore, two years ago had placed a cursed ring on his hand that was slowly draining his life away. To secure Severus Snape’s position with the Death Eaters, he had maneuvered Severus into killing him several months later. After the confrontation with the staff of Hogwarts and the Order of the Phoenix, Snape was forced to flee the castle.

By then, Lord Voldemort had taken control of the Ministry of Magic and appointed Severus Headmaster. Other Death Eaters were instated as teachers, and Severus’ life became Hell on earth. Just before the final conflict between the Dark and the Light, he was again ejected from Hogwarts.

Having summoned Severus to the Shrieking Shack, Voldemort slashed Severus’ body with a curse and set his python snake on him. He callously left his ‘loyal’ follower to die in a pool of blood.

Snape had survived the near fatal snake bite to his neck, much to his astonishment. He was even more surprised to find that Dumbledore, the manipulative old coot, had kept his word and left enough evidence behind to clear the spy’s name. Having been cleared of all his wrong doings by the Wizengamot, the Board of Governors had debated heatedly, but in the end decided to reinstate him as Headmaster.

The tired man decided to grasp life with both hands, and take his clean slate, and do his best to atone for his disastrous year as the Headmaster.

He was of two minds about the decision to offer any of the older students the opportunity to return and complete their schooling.

It had been an arduous decision, but in the end, it just made sense to have everyone repeat their last year. In some cases, it would be the year they had missed completely due to the insidious Muggle-born Registration Act. However, the Headmaster was uncertain that allowing adults to return, especially hair-trigger, war worn veterans was a good idea, but it was not his decision to make.

As Severus gazed out from the Head Table, his dark eyes carefully noted the groupings of certain students huddled together, as well as those that were ostracized. More students gradually trickled into the Great Hall, and he watched for any sign of trouble.

A cloud of wild brown curls caught the corner of his eye, and he slanted his gaze toward the slight figure that slipped into the Hall at nearly the last minute before the Welcoming Feast was to begin. Severus felt his heart clench at the sight of her. Had no one noticed her fragile state? Even from across the Great Hall, he could feel the misery that wafted from her and see that her clothes were hanging on her emaciated frame. He felt anger rising in him at the thought of, her, the brightest student to pass through the halls of Hogwarts and no one caring how she was doing.

Severus knew that most of the small number of returning ‘eighth’ year students were opting to doing an independent study as opposed to sitting regular classes. Considering their past, regardless of which side of the war they had been on, teaching them in a classroom setting would be disastrous. He decided, even before Hermione took her seat, that he would offer to mentor her personally.

Hermione settled at the far end of the Gryffindor table, aching with the pain, misery and weariness that seeped into her bones. She felt frazzled and uncertain, feelings she was most unfamiliar with. She gazed about the Great Hall, taking in the placement of each person and the most direct route to the exits. Hermione realized just how old she felt when the tiny First Years were brought in to be sorted.

She waited, relatively patient, for the Headmaster to finish his welcoming speech, and they could begin their meal. Not that she would be eating much – after the year on the run, and the stress of the rebuilding Hogwarts, her stomach had shrunk, and she had trouble keeping food down. Earlier, Hermione had been to see Madam Pomphrey who had prescribed nutrient potions to help with her appetite, but mostly it was just time she needed to heal.

After the meal, but before she could escape to her room – all adult students had been given individual rooms and a common room to share – an owl landed before her. Hermione cursed under her breath, she had hoped to have at least one day’s peace before the badgering and manipulations began.

Hermione had found it peculiar that Hogwarts had not offered classes in Wizard culture to the First Years, back when she started her schooling. But as the adventures with Harry and the need to stay alive overtook her desires to fit in, Hermione’s intentions to study Wizard culture had disappeared. Now she was paying the price for not knowing.

She gently took the letter from the brown owl, giving it a piece of meat from her plate in thanks – it wasn’t the owl’s fault for the news it brought. Hermione stuffed the letter into her bag to read later. No one noticed, except for one pair of black eyes that narrowed in concern.

Harry and Ron, among many others, had decided to take up the Ministry’s offer of waived NEWT’s to enter directly into the Auror training program. They had expected Hermione to follow them, and there had been a large fight between the ‘Golden Trio’. Hermione wanted to finish her education before seeking out either a job, an apprenticeship or further education. The two boys couldn’t understand her love of learning and had put immense pressure on her to go into the training program. Hermione sighed, even Neville had balked at coming back to Hogwarts. He had decided to take a horticultural apprenticeship in France. There were very few that had returned to finish their eighth year.

Feeling depressed and alone, Hermione was ready to head back to her room and cry herself to sleep, yet again. To her surprise, she felt the air displace around her as the Headmaster came into sight and stop beside her.

“If it is not too much trouble, Miss Granger, I would like to speak to you in private before you retire for the night,” Severus’ deep voice rumbled over her.

The Headmaster gestured for her to proceed him, “After you, Miss Granger.”

Hermione was gobsmacked by his demeanour – maybe her mind was just playing tricks on her, or perhaps he was no longer the mean and bitter man he had been.

Having only heard descriptions from Harry about what the Headmaster’s study looked like, Hermione decided she preferred the understated grandeur Severus Snape utilized. He had redecorated in dark browns and light creams, with sage green as an accent color. The room felt both warm and comforting, and some of her tension relaxed. “Tasteful,” she thought.

Instead of leading her to sit in front of the large oak desk that dominated the study, he indicated the armchairs nestled in a nook by the fire. He sat in the opposite chair and waited patiently for her to follow suit. Swallowing a gulp, Hermione did so.

“I am sure you are wondering why I asked you here, Miss Granger,” he told her.

Severus brought his hands up to fold together in front of his face to tap his forefingers against his chin and pursed his lips. “I am genuinely concerned about your health and magic. Poppy advised me you had seen her earlier, yet you wouldn’t let her scan you for injuries or curses. I know you suffered many from the Final Battle yet refused treatment then and now. Why?”

Hermione felt the blood drain from her face and spots began to dance in front of her eyes. Her breathing went shallow, and her hands grasped at her chest.

Narrowing his eyes at her panic, Severus leaned forward to grasp her hands, “Shh, it’s alright. Take deep breaths. You are safe here. Breathe with me. One. Two. In. One. Two. Out. That’s a good girl.” Something was very wrong.