nymm sauce for you, boss. the girls get it on in the dressin' room.

shouts out to cy for reading this when it was kinda baby and reassuring me that it didn't reek of rotten tuna virgin
ALSO I'M SORRY ABOUT THE MIRRORS I DIDN'T THINK I WAS TALKING ABOUT THEM THAT MUCH
also omni and jesi for giving me funnie noat joeks lol, it really do be nyamimi's bizarre sauce adventure
and mo for literally asking in public chat "hey how sauce is it tunas" so i could attempt to scare her away...
...
this is the first time i've seriously wrote like actual smut that i've shared publicly. i hope that it isn't too bad.
... 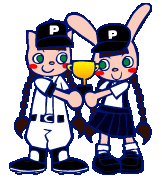 i wrote this with these outfits in mind, but if you somehow think about other outfits they were then.. Okay it's your world lol..

These girls in the dressing room were most definitely wearing old outfits of theirs to revisit memories.

Slamming her hand onto the wall next to her girlfriend's face, Nyami looked up directly into Mimi's eyes. Mimi's face immediately reddened, her eyes wide, and her smile ear to ear. Nyami's hand moved to the bow on the front of the rabbit's schoolgirl outfit, gently tugging on it while still maintaining that eye contact. Mimi was about to pass out from heat stroke, because goddamn it, Nyami's being insanely hot!

"You already know the answer to that, so go ahead..." Mimi was now averting her gaze, but her smile was still as wide as ever. She was under Nyami's mercy, and the cat was wasting no time getting started. The bow fell off after being pulled just right, and the shoulder straps that were connected to her skirt were now dangling around it. All Nyami had to do was unbutton that polo, and it's getting way past the point where this is going to qualify as something explainable if someone walked in.

One, two, three... and four buttons were undone in... probably record time. The cat pulled the polo off of her girlfriend, revealing some very frilly lace bra. Nyami stared at it for a moment, grinning.

"Huh. You were expecting this today." Nyami's voice was just... so damn sexy right now... Mimi didn't know if her face could get any redder, but it felt like it was. Her girlfriend proceeded to lift her up, putting her back onto the wall once the rabbit's legs wrapped around her waist. Mimi remembers the first time wearing these outfits, and soon after work they went into the dressing room and did it on one of the mirrors, in the same position. She remembered seeing herself in the one across, every expression, a recurring memory being right before she reached her breaking point... She felt like she was going to lose it, and Nyami hadn't even started doing anything yet.

"Mimi, you okay with this? Anyone could walk in at any time..." Nyami's tone was now of pure concern, turning her head for a moment towards the door. The door had no way to see in, but that doesn't mean it's locked.

"You've already taken my shirt off, and you look more than ready for this. How about we just get on with it?" They stared at each other for a moment, and the rabbit could swear she saw a fire light in Nyami's eyes. Whatever tiny doubt she had was gone. She was now feelin' this... in a different location. This wall wasn't going to be it, and she carried Mimi to her dressing booth, placing her on the small counter.

There they were, with the mirrors again. Nyami lessened the distance to the point where the belt buckle on her pants was directly touching on Mimi's panties. She began to start grinding on Mimi slowly, trying to ensure that the buckle was hitting those spots and it wasn't just a catgirl desperately humping her to feel good. Still would be hot either way, but it was starting to affect her quicker than it was the feline.

Nyami had started turning kisses into bites. She had intentions, that's right. She pushed Mimi's bra up, setting her breasts free from one prison to another being Nyami's hand. She began to move faster, and any sounds the rabbit was making were becoming more audible.

"You can be louder than that, come on..." The cat started to get more rough, an attempt to get her to be less shameless about being loud.

"Says the one - ah!" One of the bites felt like her teeth were going to sink into her skin, "who was worried about getting caught... mmgh..." She was beginning to reach her limit, these sensations are getting to be too much!

"K...keep touching me though, I'm getting close..." Her legs wrapped around Nyami tighter, making sure that it would be nearly impossible for her to tease her if she wanted. Nyami still maintained her relentlessness, but she was softer on the biting since the last one sounded like it hurt.

"I'm almost... t-there too... Fuuuck..." Nyami now had a grip on that bunny tummy, as if to keep herself steady while she was dryfucking the hell out of Mimi. She was moving with her eyes shut, biting her lip, and letting the soft purring of her inner cat enjoy itself.

"I-I'm so close... Keeeep going... Aaahh, I'm coming, f-fuck! Nyaaaaammiii!" Mimi's back arched, and her legs could be basically constricting Nyami at this point, but the cat kept going to let her girlfriend ride out her climax, and reach one of her own. The rabbit was squirming under her, and the sight of it only fueled her to go faster, and be rougher. Her grip was getting tighter, and Mimi could tell that she was right behind. Even though they've done this before, she still wondered how having sex with clothes on still felt just as good as doing it normally... Oh well, it still excited her to see her girlfriend enjoying it.

With a few more bucks of her hips, Nyami let out a long, shuddering "myaaa" as she hit her climax. Her thrusting was slowing down, and the rabbit could feel her squirm a little as she rode it out. She let her head rest near Mimi's neck, still leaving tiny kisses before leaving a few smooches on her lips. Opening their eyes to meet gazes, they giggled through heavy breaths as if they rolled down a giant hill and didn't just fuck on some sort of tiny counter.

"I agree, and I know exactly one spot to start!" The cat slid down her girlfriend's body, and this moment clearly wasn't going to be over anytime soon.

"Waitwaitwaitwait!! Right after all of that?!" Nyami was already sliding down her underwear, strings of love juice following and shortly breaking off. Staring at it for a few moments, she dove right in, lapping up whatever she caused Mimi to spill out during all of that. Sensitivity was at MAX. 300. Maybe a little higher, add 60 more. This cat was eating this puss like it was her favorite flavor of Temptations... and it probably did taste like that. Mimi couldn't handle it. Her body felt like it was giving out from going back to back like this.

Already reaching her limit yet again, babbling nonsense and grabbing hair perhaps a bit too tight, Mimi couldn't help but take a glance at the mirror across from them. There she was slumped on the counter, legs dangling off of it, with titties out and her favorite person's head in between her legs. This could very well be a dream.

...Except it wasn't. Mimi was getting rawed, my guy.

The sight of her in that compromised position was the final push, and in that point she could see nothing but white. Was that the light shining down on her? Did she die from getting eaten out?? Not a bad way to go out but... damn.

"So, how'd I do?" Nyami pulled away, clearly proud of her work. Mimi was... gone, to say the least. All that came out of her was incoherent mumbling and some muscle twitches.

"Ah... seems like I've done my part right. It's gettin' to be a bit late now, so I'll help you get dressed again, if you don't mind." She left another small smooch on Mimi's lips, and the rabbit was still a little out of it, but she responded to the best of her ability.

Komaju as well as 2 guests left kudos on this work! (collapse)