Tales from the Hanami

Onodera Ritsu, whose birthday was the reason for this evening beneath the sakura blossoms, was feeling extremely awkward. Even though the majority of people invited were connected to him, he wasn't accustomed to being the center of attention or so open about his relationship. He had to force himself not to constantly hide his hand where the ring Takano had given him shone.

A constant stream of people had taken turns greeting him, wishing him well, and a few had given him gifts. Isaka's gift had been especially embarrassing – thank god he hadn't opened it fully enough to expose it to others. Takano had fallen over sideways, laughing his ass off at what was clearly a maid's dress.

Yuki and Shindo had given him sex toys. Kisa gave him the newly printed volume of Yukina's first BL manga. Usami Akihiko and Misaki gave him bed sheets made of the finest Indian cotton. Usami whispered in his ear that they were marvelous to have sex on and washed well. Onodera wasn't sure he was going to survive the party, much less another year.

Onodera's mother's gift was a full set of kitchenware for their new apartment. Onodera was so relieved his parents knew about them and approved. No more omiai* portraits or blind dates or lectures. She did keep mentioning grandchildren, but that was not something they needed to rush into. After all, he had just turned twenty-seven, not thirty-seven.

Takano's gift was a promise/threat to cook him meals with the new pots and pans and make him eat them. Takano was a devil about Onodera's health. Also, Takano bought them a new bed, a very comfortable new bed. He whispered, “I can't wait to read that manga, get some ideas, and then play with the new toys on the new sheets. While you wear that maid costume.”

Onodera grabbed his phone and attempted to book a flight to Australia. Takano confiscated it.

His favorite gift was safe at home, delivered the day before. A large portrait of the two of them - Takano hugging him from behind while Onodera smiled softly. Takaba Akihito had taken the picture at Usami Akihiko's party a month earlier.

Embarrassing gifts aside, the most difficult part of the day had been facing Kohinata An, his former fiancée and childhood friend. She had graciously accepted defeat and removed herself from Onodera's life once he finally admitted he loved someone else. Since that last meeting over a year ago, he'd only gotten updates on her life through his mother.

She looked good. She always looked good – she was a pretty woman. But she also looked confident and composed and her smile for him was a sweet one. She had recovered from her broken heart and he was glad. Then she sat down next to Takano and drowned him in stories of their shared childhood that made Onodera want to strangle her.

The party's theme seemed to be, “Make Onodera regret all twenty-seven of his years of living, or at least make his face turn bright red as many times as possible.” Everyone was giving it their all.

That changed once darkness fell and the fires were lit. People settled in small groups, quietly chatting or just enjoying the peaceful night. His parents left early, taking An with them. Takano and Onodera were alone, staring into the fire, listening to a violin that seemed to serenade them and lull them into a state of perfect contentment.

Onodera allowed Takano to coax him into laying down, his head resting on Takano's chest. He covered them both with a light blanket and kissed Onodera's forehead.

“This reminds me of the first time we slept together. The sakura were blooming and you laid in my arms just like we are now.”

“I was so nervous and happy, I thought I might die of it.”

“You were funny when I kissed you and you kept your mouth clamped shut.”

“Ugh! Don't remind me of that!” Onodera started to squirm, but Takano held him tightly.

“Calm down. I loved you for that. I loved you for many reasons. You were so different from me – hopeful, sweet, brutally honest, and open. Except for using a fake name on the library checkout cards – I'm still pissed about that! I might have found you again if I'd known your real name.”

“I was an idiot. I was basically stalking you - a fake name seemed like a good idea at the time. And, well...I didn't want you to find me, though I didn't think about that at the time. I just ran away because I was convinced you had taken advantage of my naive feelings to...uh.”

“Dumbass. You kicked me before you ran. And did you really think you were so sexy and irresistible that I'd pretend to like you just to get into your pants? You spent all those years watching me and thought I was some pig who only wanted to have sex? But you loved me anyway?”

“I know it doesn't make any sense! I was fifteen! I was so crazy about you my brain couldn't function properly!”

“And now? Do I still make you crazy? Is your brain functioning?” Takano wiggled beneath him, making it clear that a certain part of him was functioning quite well. Not his brain.

“Totally insane and brain-dead,” Onodera whispered. “Otherwise, I wouldn't be laying here in the open while you grope my ass. We're not alone, Masamune.”

“If we can't see them, they don't exist. It's just you and me and the fire.” His hand slid into Onodera's pants to squeeze a cheek.

“Argh!” Takano abruptly pushed Onodera off, stood up, and dragged him into the darkness.

“Masa-mph!” Against a tree, Takano kissed Onodera until they were both moaning and grinding into each other. “No...Masamune! Ngh! Wait!”

In a lust-filled daze, Onodera did as asked and held onto the tree trunk. Bent over, ass bare, Takano opened him up with one hand and stroked his erection with the other. He had condoms in his pocket? Onodera thought as he was teased back and front. Damn him... “Oh god, Masamune! Hurry!”

“Ritsu!” Takano slid into him. “Hah...” he breathed into Onodera's ear. “Why do you always feel so damn perfect? Like you were made for me.” He moved slowly until he found the right angle and Onodera yelped in response.

“Shh!” Takano placed his hand over Onodera's mouth as he began to speed up, thrust harder. Soon, he let go of Onodera's mouth to grab one hip for stability, leaving Onodera to press his face into the crook of his arm to stifle his cries.

It didn't take long - Onodera could never hold out very long where Takano was concerned. He spurted out onto the tree, calling Takano's name as softly as he could manage.

A few moments later, Takano bent over and pressed his forehead onto Onodera's back, grunting as he also came. Then he pulled Onodera down with him so they were kneeling and Takano wrapped long arms around him, held him close from behind. “Ritsu...I love you. Thank you for being born twenty-seven years ago.”

Onodera laughed weakly. “I think you have to thank my parents for that, not me. I should be thanking you, anyway. For finding me again. For still loving me after I kicked you and ran away and used a fake name and fought you and made you wait another two years before I could say the words. I love you. Thank you for the best birthday ever.”

Somewhere a person howled like a wolf and someone else responded in kind, making Onodera aware of where they were – at a party, surrounded by people. “Shit! Oh, shit! Damn you, Masamune!” He scrambled to pull his pants up. “I'll kill you for this!” he hissed, stalking back to their fire.

“Ahh, there's my sweet, darling Ritsu!” Takano fixed himself as well, but in less of a hurry. When he caught up he found Onodera standing and staring at Isaka and Asahina, sitting on the next tarp over and smiling up at them.

“This night air really gets the blood flowing, doesn't it, Ritsu? Did you make a wish? Oh, that's for blowing out candles, not...”

Takano's rich laughter rang out as Isaka won the prize for turning Onodera's face the reddest it had ever been in twenty-seven years. 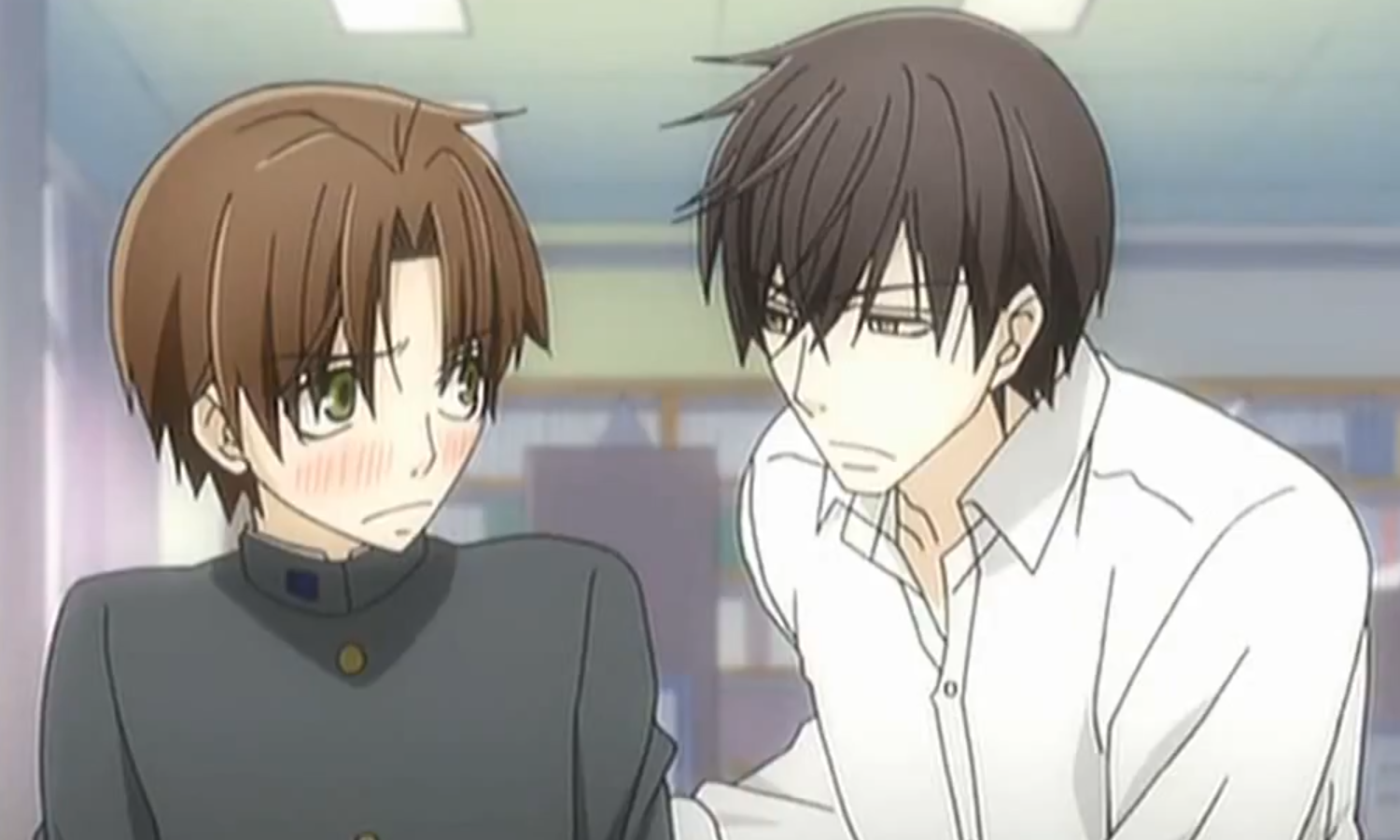 Happy Birthday, Onodera! (A little late now, but I can't always be organized.)

The Tokyo Yaoiverse will be back, now that this party is finally over!

*Omiai – formal meetings for the purpose of arranging a marriage. Sometimes negotiations start with a photograph exchange and then two people meet in person for a date.