Wonderful readers, it's the epilogue! Thank you for continuing on this journey with me, all of your support and love has meant so much. See you next week for the beginning of part III! There will not be a break in posting!

“What a wonderful thing,” said the basilisk, watching over Harry’s shoulder as he hung his necklaces on a little nail he’d pounded into the wall. “To have someone as close as your own heart.”

He finished hanging his necklaces. Araeo’s Band necklace, Samba’s pearl, his Iceglow pebble, Chikkerit’s pendant. His bracelets he put down on a ledge nearby: thestral hair, an old friendship bracelet from Limmy, and Ava’s Iceglow present of lake glass. They were, every one of them, talismans of love.

The basilisk was looking not at him, but at its eggs. He remembered, though he tried not to stray too far down that road, how he had slipped into the basilisk’s mind in the deeps—how it had been to remember its siblings, once as close to it as any other minds could be.

He walked over and pressed himself to the basilisk’s side, placing one hand on the curse. It seemed alive beneath his palm, malignant and spiteful. “You’ll have it again,” he said softly, staring into the green light.

“Do not think you are not that to me,” rumbled the basilisk.

He looked up into its yellow eyes, burning hot like two suns next to him. Warmth filled him up. “I know,” he said, and gazed back at the spell again. “That’s why I’m going to do this.” He curled his fingers into the curse, digging his nails in. “No matter what. They’ll be free.”

The basilisk closed its warm eyes and sighed out, long and slow. “To have all the pieces of my heart together…it will be a joy immeasurable.” 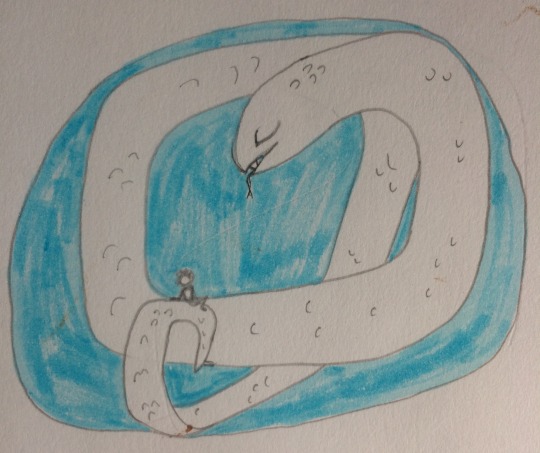 “It will be a joy immeasurable.”

Just a little highlighter doodle of the basilisk and Harry to end things : )

Make sure you subscribed to the series itself, because on Thursday I'm posting the first installment of part III: "amid the ever-rushing future"!