Chapter 6: every breath, every hour

This isn't going to go the way you think.... 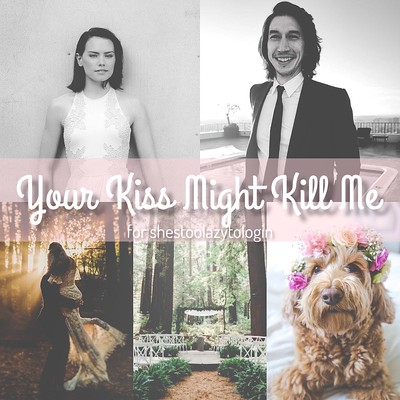 Rey lived her life by it, let it twine around her through every moment of her life. From the steps of her feet, the constant tapping of her fingers, and the beat of her heart. Of all things she didn’t expect it to be, the rhythm of her heart wasn’t at all anxious. It was steady. It was sure.

She sat by the window, soaking in the warmth of the California sunshine that streamed in through the marbled windows of the cozy little cabin. It was something she’d grown to love over time, taking every chance she could to take in the rays, watching with wild wonder as she grew more and more freckled every day.

A soft smile bloomed across her face as she twisted a chestnut curl around her finger, letting out the quietest of sighs as she reached out to scrub the soft, crinkled fur behind the ears of the Goldendoodle sleeping on the floor beside her.

Chewie was just one note in a series of happy pages that had filled the book of their story since the day they’d said goodbye at the airport. So much had happened since then, that oftentimes, Rey felt it had been an entire lifetime since she stepped foot on the airplane that carried her all the way to the Bay Area.

Berkeley was incredible. Amazing, even, and so, so much more than she had expected.

Han and Leia had delivered on their promise of nurturing hers and Ben’s relationship, sending her the very first care package during her time at school. It had arrived late one Friday afternoon - an iPhone in the hand of their son - Ben Solo.

She had squealed and leaped into his arms like a little girl on Christmas morning, so full of joy, tears streamed from her eyes.

They’d said goodbye, again, after an eventful weekend, spent exploring the redwood forests and eating sourdough bread in San Francisco. Afterward, in between texts from Ben, Rey lost herself to that same rhythm. Cal Band kept her busy during her free time, filled with loud music, challenging drills, and unforgettable new friends.

Christmas came and passed by too quickly. Three glorious weeks that passed by in a whirlwind, and as soon as she was home in Berkeley, the rest of the year flew by so quickly, Rey couldn’t quite believe they’d made it through the first year unscathed.

Being without her best friend had been an adjustment, to say the least. Lulls happened. Arguments, too, and their sophomore years at school had been the hardest.

The distance began to take its toll. They got busier. Made more friends. Got jealous .

If she was honest with herself, there were times that Rey wasn’t sure that they were going to make it, but nothing good ever comes easy, and Ben was worth the work.

Come September of their third year, Rey moved out of the dorms and into an apartment of her own - with Ben by her side.

It had only taken a single heartache for Ben to decide that Boston was too far. Too great a distance away from his love. His dreams were nothing at all compared to his dream of doing everything with her.

Securing a transfer had been a challenge, one that Ben was more than happy to take on. It was all worth it when he lifted her from her feet and walked over the threshold of their tiny apartment. The first thing that was theirs .

Chewie came soon after, along with the challenges of learning how to live together - on top of their studies.

Like everything else, it all went by in a flash, and before they knew it, they were side by side all over again, dressed in caps and gowns, graduating onto an entirely new - and breathlessly exciting - adventure. This time, though, Rey wasn’t afraid, because Ben was there. And he always would be.

He proved it to be so a few months later, when they’d both lucked out and found jobs they’d only ever dreamed of having, tucked against the metropolitan hillsides of San Francisco. There, as they danced on the hardwood floors of their empty apartment amongst the empty Chinese food cartons and stacks of moving boxes, Ben knelt down in the candlelight and asked her to be his - forever.

Now, a year, and a dizzying amount of planning, later, Rey sat alone in the warmth of the early summer sunshine, staring contently at the ivory wedding gown that hung on the back of the door.

She let out a sigh, blinking softly in the warm strands of light as she read and re-read the letter that had arrived a few minutes prior. Tracing her fingertip along the edge of the teardrop diamond earring that had arrived with it, Rey blinked back her tears as she read it all over again.

Today, I have never been more confident in any decision that I have ever made. When I asked you to marry me a year ago, I confess, I wanted to do it a long time prior to that night. I have known since the moment I met you - yes, that long - that I wanted to spend my entire life with you. The months, days, and moments leading up to our wedding have been nothing short of extraordinary, and you have reminded me time and again why I fell in love with you in the first place. You are the most beautiful person I know - inside and out - and I am certain that I don’t tell you that enough.

When two people are getting married, you tend to hear a lot about “cold feet”. I think it’s a pretty normal thing for couples to experience it. Marriage is a big deal. A life-altering commitment. However...this is a feeling I know I will never experience.

As I am writing this letter, rather than being scared of what the future will hold or what could have been without you, I am sitting here, completely content with how my life has played out. If I could live my life one thousand times over again, I can honestly say that I wouldn’t change a thing. This might surprise you, as I have heard you say over and over that you wished we’d never been apart. But...hear me out...that time meant something. You yourself said that we ought to make mistakes so that, when the time came that we were asked what we wanted to be, we’d be sure. So here I am. Sure about you. And because of that, I wouldn’t change a thing.

Rey, you are truly the greatest thing that has ever happened to me. From the moment we met on that playground, I had this feeling about you. Maybe it was the Dragon Ball. Maybe it was the Sailor Moon, or it could have been the peanut butter sandwich. All I know is that there was something special about you.

It was a feeling that I hung onto as we got older, all throughout school high school, and those pesky college years, too. It’s the feeling that kept our relationship strong through sickness and in health, and will continue to do so. That feeling is, of course, love. My love for you.

I promise to hold onto that feeling for as long as I live, and beyond that too. You can consider this a preemptive “I do”. It is a promise to be true to you in good times and in bad, in sickness and in health. It’s a promise to love you and honor you for all the days of my life.

Your husband to be,

A soft knock came through the door, drawing Rey’s eyes away from the letter with a smile when Leia’s head popped in.

“I’ve been ready since the first grade,” Rey grinned, rising to stand as she released a heavy sigh of anticipation.

With her soon-to-be mother-in-law’s help, Rey slipped on her lace wedding gown, smiling softly when she ran her hands over the delicate fabric as it settled around the curve of her shoulders.

Her heart beat fast, filled to the brim with colors and promises of a life well-lived as her thoughts went to him, imagining him waiting for her at the end of the aisle, just moments away from becoming her husband.

Ben had taught her so many things over the course of their lives. How to be brave. How to be strong. With him by her side, she’d never been afraid to fall.

Taking her bouquet from Leia, Rey tucked her nose into the carefully chosen collection of pink dahlias, and blinked back a silver glimmer of happy tears as she strode towards the door.

The din of their guest had become hushed as a string quartet played a delicate melody from behind the altar. Rey closed her eyes as the sunlight kissed the corners of her face, taking a moment to herself before the doors were pulled open and she laid her eyes on the future that was waiting for her.

There, tucked amongst redwoods that stretched further that you could see, dripping with pale gardenias and orange blossoms that had been strung over their heads, was him. Her future.

With one step closer, and a single look in his dark eyes, the time stood still. Every day, every breath, every hour had come to this.

And, as she’d said was she was still eighteen...for the right man...she was early.

The wedding venue I imagined in my head is Island Farm, in San Gregorio, CA.

bonus playlist for listening and having high school flashbacks