David and Aaron are preparing to ride on a float in the parade at Mardi Gras. David reflects on how positive the experience has been. 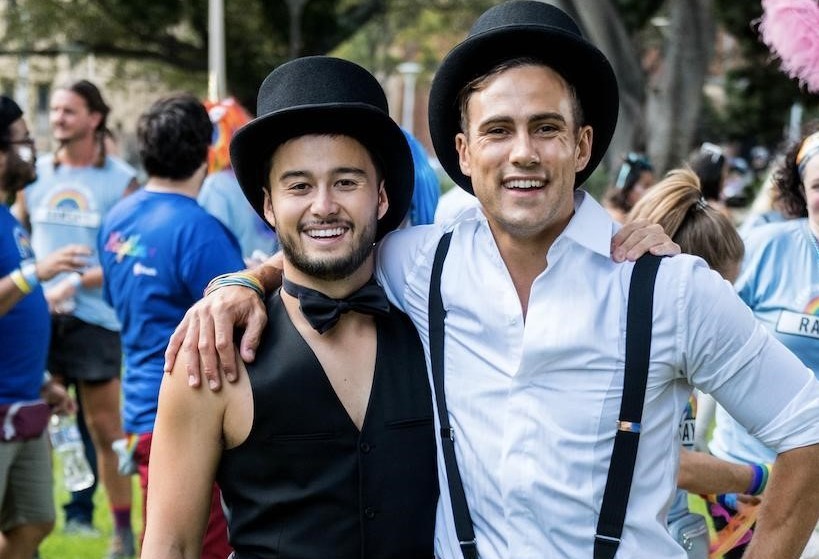 David chuckled to himself as he came out of the bathroom.

“What?” Aaron asked from where he was getting into his parade outfit after his shower.

Aaron rolled his eyes, “You better not still be laughing at me.”

David bit his lip and then burst out, “Courtney Act just remembered you vomiting in an audition and mimed it, along with the famous dance move. I’m going to be laughing about that for years.”

Aaron huffed, “But, you know what, she remembered me. That’s the important part.”

David chuckled, moving to get his own outfit from where it was hanging in the hotel room closet.

Aaron shrugged, “Not really…I absolutely loved it back then. The cheering crowds, the attention, getting to audition for famous people- it was a load of fun. Not to mention the pick-up potential.”

David pulled a face, “I don’t need to hear about that.”

Aaron smiled to himself but moved on, “it was a good time in my life but I don't want to go back to it.”

“Injuries- I fell off the stage at a circuit party and sprained my ankle. That's when I worked as a bodyguard for your dad for a while.”

David shook his head. Sometimes he didn't know what to think about some of Aaron’s stories, he had led a crazy and ridiculous life.

Aaron sat down to put his shoes on, “Eventually I just grew out of it. I started wanting something more, to achieve something using my brain.”

“And you did! You started your own business, which you have run successfully for years now.” David moved over to stand in front of Aaron, cupping his face, “You went after what you wanted and you work hard everyday. I am really proud of you, you know that?”

David leaned down to press a kiss to his forehead. He pulled back and returned Aaron's smile, “But, I would also be proud of you if you were still doing your dancing.”

David's face was earnest, “Of course. I just want you to be happy.”

“I've had boyfriends that got really jealous about it.”

David moved away to put on his vest, looking thoughtful, “I suppose I can't claim to know exactly how it would feel. You've never seriously worked as a dancer while we were together. I’d like to think it wouldn't bother me.”

Aaron smiled at the thought, “So, you'd come and watch my gigs?”

“I would. And I would cheer the loudest, hoping to get your attention.”

“Oh, well, I’d definitely go home with you then.”

They grinned at each other.

Aaron stood and turned to look at the shirt and braces laid out on the bed. He frowned at them for a while. “Should I just go without the shirt?”

David chuckled; they had had this conversation numerous times. “Do I need to remind you about the chafing?”

Aaron made a displeased noise, “But I look hotter without the shirt.”

David laughed, “I promise you look almost as hot with the shirt on.”

“Aaron”, David used his stern husband voice, “We will be out most of the night and it's quite cool out there, you need your shirt.”

Aaron sighed, and reached for his shirt.

"By the end of the night when you're not freezing and rubbed raw from the braces, you'll be thanking me."

Aaron only buttoned halfway up his torso, tucked in his shirt and started putting on his braces.

“See, hot,” David said as he walked back over to Aaron.

Aaron gave David a smile and started rolling up his sleeves.

“Here, let me,” David reached out and took over doing the sleeves.

“Thanks,” Aaron said, and took David in, looking him up and down, “Speaking of hot, you look amazing.”

David smiled at him.

When he had his hands free, Aaron reached up to straighten David’s bowtie, and leaned in for a kiss.

“I’m gonna need to watch out for competition, with all the attention you’re gonna get tonight.”

David planted a smile on his face, which was obviously fake.

Aaron cocked his head, and gave him a fond look, “You still nervous?”

“A bit,” David shrugged a shoulder.

“There are going to be 300,00 thousand people out there, billions watching on tv! Not to mention everyone we know at home!” David burst out.

“You have mentioned that a couple times,” Aaron teased gently.

Aaron chuckled and picked up David’s hands, squeezing them to encourage David to look up at him again. “It’s okay to be nervous,”

“Terrified then…but we’re going to be up there together. Just focus on me, I’ll be right next to you. And we are going to have so much fun.”

David let out a long breath and nodded, smiling, feeling a bit better, “Okay.” He leaned in for a kiss, “You know, you’ve become a pro at calming me down when I’m freaking out.”

Aaron laughed, “I’ve had a lot of practice,” he poked David in the ribs.

“Hey!” David said, outraged, and swatted at his hands, but Aaron darted away to finish getting ready.

David grabbed his phone to check his messages, wandering over to the window. New messages and notifications from their social media accounts were still flooding in.

All of the support was a bit startling, but amazing. He glanced up and gazed out the window down at the streets below. He could see Mardi Gras decorations all over, not to mention the people walking the streets were all particularly colourful and sparkly.

He must have zoned out for a while because he was jolted into alertness by Aaron’s voice saying his name and a hand on his shoulder. “David? Hello?”

Aaron peered over his shoulder to look at his face, “Everything okay?”

“Yeah,” David gave him a smile and then looked back out the window, “I was just thinking…”

“…I was just thinking about all of the support we’ve been given, by friends, family, online. I mean, Dad literally organised a float in the parade for me.  And looking down at the streets, where half the city is celebrating people like us. It’s…a lot. For someone who spent years in denial, hating myself deep down for who I was. I never could’ve imagined this.”

Aaron quietly moved closer behind him, sliding his arms around his waist to hold him.

David touched a hand to Aaron’s, clasped at his belly, “I wish I had realised earlier…”

“Everyone at that parade- those numbers that terrified you- those people are there to cheer us on, accept us, and support us.”

“And you have my acceptance and support, always.”

David turned in Aaron’s arms, away from the window to look at him, “I know. It’s largely thanks to you that I can now say: I’m happy about who I am. I wouldn’t change my life with you for anything.”

“I love you,” Aaron moved in for a kiss, holding David close for long moments.

David didn’t let go either, leaning further into the kiss, feelings and emotions swelling inside him.

Their bliss was interrupted as both of their phones pinged.

Aaron pulled back with a laugh, “Our fans await.”

“How about a picture in our costumes?” David suggested.

They posed in front of the window, taking several shots. David flicked through the photos, to find one to post. He stopped at one in which both of their smiles were particularly blinding. Their eyes were crinkled shut from how much they were smiling. They looked so happy.

Aaron looked over his shoulder and whined, “Why’d you post that one, I look like a maniac.”

David laughed, “No, we look happy.”

Aaron shook his head and moved over to the bed to grab the last item of their costumes, two black top hats. He held one out to David, “You ready to celebrate?”

David reached for the hat and answered confidently, “I am.”

David finally got the door open, staggering as Aaron stumbled in after him and bumped into him.

David fumbled for the light switch and tried to hold Aaron steady. He hadn’t been drinking, but he was wired from the events of the day and so far beyond tired he felt a bit delirious.

Aaron was very drunk and he hadn’t shut up the whole walk back to the hotel or in the elevator.

David directed them on a slightly wobbly path toward the bed.

“I can’t believe believe that guy recognised us from the float, we're famous!” Aaron slurred, laughing.

“Actually I'm pretty sure it was a line, he was trying to pick you up- or both of us." David pulled a face. "He probably just heard you telling every person we met,” David said dryly.

“Oof,” Aaron bumped into the bed and promptly fell flat onto it, taking David down with him.

They laughed uproariously about it for several moments. David finally untangled himself enough so they were laying side by side looking up at the ceiling.

“Tonight’s been so awesome,” Aaron gushed.

“It has,” David grinned.

“So gay and so awesome,” Aaron said.

“I don’t want it to end, let’s stay up all night!” Aaron said excitedly.

“I think we already have,” David wiggled around to pull his phone from his pocket to read the time. “Yup, it’s definitely tomorrow.”

David pulled it out of the way, “Noo! It’s official, you have got to the stage where all of your ideas are terrible.”

“My ideas are awesome!” Aaron said, but gave up trying to grab the phone.

“I think we should try to get some sleep.” David said, which got the expected refusals from Aaron.

David pushed himself up with a groan and started getting ready for bed. As he changed out of his costume he noticed the flash of glitter on every bit of his skin and clothing. Something told him they would just have to accept being covered his glitter, at least for the next few days.

Aaron was still chattering away to him the whole time. Thankfully, he ended up being compliant when David made him get up to use the bathroom and even let David help him get ready for bed.

By the time they were lying in bed, lights turned off, even Aaron’s energy had waned.

“Did you have a good time?” Aaron slurred tiredly.

“I did,” David said quietly, but earnestly.

“I’m glad, I hated the thought you could be ashamed of who you are,” Aaron mumbled.

David gazed fondly at the dark outline of Aaron lying in front of him, and reached out, fumbling to find and hold his hand. “I’m not ashamed. I like who I am. And I love you.”

“Love you too,” Aaron trailed off.

“I wish I had come to see the Mardi Gras celebrations sooner. This was one of the best days of my life- after our wedding of course. Don’t get me wrong, I feel a sense of belonging with my family and our friends and with you. But I’ve never felt it on such a massive scale. Like I was a part of something bigger. It really does do something to your soul- I feel proud to be who I am, I feel so proud of the relationship we’ve built.”

David chuckled and lifted Aaron’s hand to kiss the back of it. He settled in to sleep, knowing it wouldn't take long- he was absolutely exhausted.

They were definitely coming back next year, maybe even with a little one in tow.