The Long Year Remembers You

A rainy night, an orchard in bloom, and a decision made.

The title and theme are from Edna St. Vincent Millay: "Mindful of you the sodden earth in spring."

The day had been moody, spitting rain and turning both the coats of the horses and Zelikman's newest hat into sodden masses of hair. Amram, whose Phyrgian cap of greasy leather was quite unaffected by the weather, peered into the valley that was being revealed, stride by stride, as they crested a hill. "There," he said, and gestured; "A shepherd's hut, perhaps."

In fact, they were fortunate: it was somewhat larger than the hut Amram had suggested, a dilapidated miniature farmhouse. The wild hillside still showed, faintly, the marks of cultivated fields and a small orchard of olive trees, over run with wild grape and briars. Farther down the hill, in the growing dusk, they could make out a larger and much better tended farm.

"The roof has fallen in," observed Zelikman.

"Not entirely. I don't know about you, but I am getting in out of the rain."

Amram slid down from Porphyrogene's broad back and unsaddled him, them carried his gear in through the ruinous door of the place. A moment later, torch light shone through the entry, Zelikman shrugged and dismounted from Hillel. "How is it?" he said, peering inside the structure.

"We have all four dossed down in worse quarters," said Amram. "The rain from the holes in the roof is even running off through the back corner in a most well-behaved fashion. Bring in Hillel."

Soon they were seated by a meager fire, with a pot of lentils and vegetables simmering. Zelikman was muttering over his soaked hat, which he was attempting to reshape, and Amram was reckoning the take from their latest venture. The horses stamped and snuffled by the door.

"Not bad," he said, after a time. "We could even afford passage on a ship."

"Why should I wish to do such a thing?" asked Zelikman, who was now stretching the hat over a framework of lashed sticks.

"No reason, save that it might make some difference in our fortunes."

"I do not imagine that HIllel would care for a sea voyage," said Zelikman, and Amram reflected that the same would no doubt be true of Porphyrogene. He nodded and dug out a half loaf of coarse from one of his saddlebags. After a sparse and silent meal, they fell quickly asleep.

Zelikman woke later than he had intended. Hillel was nosing at his hair, obviously of the opinion that it was past time for a measure of the corn that the partners had placed prudently out of equine reach. Zelkiman pushed the Arab's big nose away and only then realized that Amram was nowhere to be seen.

After the first tense moment, Zelikman inspected their resting place a little more carefully. Porphyrogene was there, as was most of Amram's gear. The little pot of porridge left to cook in the ashes had been pulled out so the contents wouldn't burn, and half of it was gone.

Perhaps Amram was just out attending to his bowels. Zelikman broke his fast on water, porridge, and raisins, and decided at last to go after his wayward companion.

It was a fine day outside, startlingly clear for the early hour. Amram's trail was clear enough even for Zelikman to follow: downhill, toward the farm, through the neglected olive grove. Perhaps Amram hoped to find a stray chicken or goat, although t was strange that he had not waked Zelikman before setting off on such an expedition.

The olive trees thinned out, and suddenly Zelikman realized that the hillside ahead of him was covered in rosy clouds. 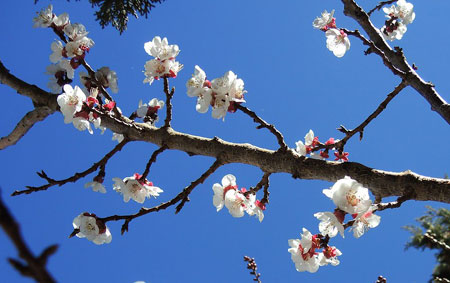 An almond orchard, he realized after a moment. The man who owned it must be well-off indeed, to have such a large one. As Zelikman continued onward, he was surrounded by a world of pink and white blossoms. Presently he came upon Amram, sitting on the trunk of a fallen tree and staring blankly at the rose-colored blossoms.

"I could have been killed in my bed," observed Zelikman, when it became clear that Amram was not going to speak.

He was not sure why these blossom made him think of his sloe-eyed daughter Dinah, save that she would have appreciated them more than anyone he could think of. Surely his own sensibilities were not nice enough to be moved by this extravagant sight. Still, he was not inclined to move just yet. Zelikman took up a seat on the other end of what had been an almond tree, facing the other direction, and was exactly as silent as Amram had wished.

They stayed there until a little willful wind arose, pushing ahead of it thin grey clouds with the promise of more rain. Pink and white petals showered down upon them, as if in prelude to this, and Amram sighed and got to his feet. "We're going on to Africa," he said, voice flat.

Zelikman stirred and stretched. "But not by ship," he said.

"No, I suppose not," said Amram, starting up the hill.

Zelikman loped after him. "The route passes through the Holy Land," he noted.

"It may well be interesting," said Zelikman. "Perhaps even remunerative."

Amram nodded. It made as much sense as anything else, and certainly more sense than the idea of finding one young woman in all the trackless miles of his homeland.