eight to the first power

“Ughhhhhhh,” Otacon dragged his hands down his face, groaning in frustration. “I can’t believe I forgot Ḥannukah.”

חג שמח! and happy first day of purimgifts! before i read your prompt i had never made the connection about otacon being jewish before, and afterward i couldn't stop thinking about the experience of sort of being jewish, but only knowing it from what you've heard from other people, the experience of holidays you celebrate but never really celebrate for real...the american jewish experience™, if you will. being othered from your own culture, being lonely, but learning more when you have those who want you to.

so thus: hal teaching his family about being jewish.

eight to the first power is 8-- 8 for the number of nights of hannukah and the candles lit on the final night. the image came to me first, and i wanted to write a fic to go with it, so...think of this as a belated hannukah gift. instead of christmas in july we have hannukah in adar.

“Hey,” Otacon said in an almost-whisper, the kind of sotto voce that tried to be quiet and just ended up even louder, “Where did you put the tealights?”

Snake, still mostly asleep, grunted “Duffel.” Otacon, mumbling thanks, moved off into the darkness of the empty house. Awake now, Snake listened to the sounds of his partner rustling around in the duffel bag. Zipper opening, the dull thud as the bag rolled sideways and Otacon groaned at how heavy it was, whispering that he couldn’t pick this thing up, what had Snake put in it. Fingers scrabbling around between ziploc bags and the clack of Snake’s sneaking equipment and gear, then the whisper as Otacon pulled out the giant gallon ziploc they had stuffed with tealights.

Snake listened to Otacon count tealights in the darkness. When he’d gotten to thirty and was still counting, Snake—not lifting his head from where he had it smushed into the side of his sleeping bag—asked: “What are you doing.”

“I forgot about Ḥannukah again this year,” Otacon sounded miserable, let-down and frustrated. Snake tried to remember what Ḥannukah was; came up blank. “I remembered Christmas but forgot that.” They had rung in Christmas three days before by walking three miles through a blinding blizzard to buy a grocery store rotisserie chicken. It had been cold by the time they had gotten back, but they’d eaten it anyway.

They were squatting in an empty cabin that in the summer was probably a hunting lodge. It had no running water and no electricity, no signal to anything even vaguely resembling a cell tower. No gas, no stove. It was exactly the kind of off-the-grid they needed in the couple of weeks after any Philanthropy project.

It was freezing fucking cold and dark as shit, but it did its job.

Snake sat up, rubbing his face and yawning. In the wan moonlight the uncovered windows let in, he could see Otacon, bundled into two sweatshirts and wearing fingerless gloves, huddled into the unzipped blanket of his sleeping bag. Without the glinting silver rim of his glasses, his face looked oddly naked. He seemed to still be half-asleep, squinting, his hair all on-end on one side. He’d probably just woken up.

“Ughhhhhhh,” Otacon dragged his hands down his face, groaning in frustration. “I can’t believe I forgot Ḥannukah.”

“Ḥannukah,” Otacon corrected, still distracted. He was squinting down at the bag. He tried shutting one eye, but it didn’t seem to make a difference. He sighed. “I really shouldn’t use all forty-four of these, should I.”

“Probably not. Those are our only candles.” Snake rubbed at his eyes. “Why?” He felt like he’d heard that word before, but half-asleep, he couldn’t place it what it meant.

“It’s the Jewish winter holiday, the festival of lights.” Otacon opened the ziploc as he spoke, pulling out eight tealights. Sliding out from underneath his sleeping bag, he went to rustle around in one of their other bags until he emerged with a paper plate. He set the candles into a straight line, and then pushed them over so they were on the ground under the window. “You light candles every night for eight nights to celebrate an old miracle, but the date moves around every year. You’re supposed to put them in the window, but...” They were illegally squatting. Not a great idea.

“I didn’t know you were Jewish,” Snake said instead.

Otacon half-laughed. “Half-Jewish, sort of, I guess. My dad never practiced much.” When he started fumbling around for matches, Snake kept him from causing more problems and just passed him the box. And his glasses. The last thing they needed was Otacon trying to light a match or a candle and burning down the house because he had no depth perception. “But he always liked Ḥannukah, so we did it all the time when I was a kid.”

“Huh,” Snake crawled halfway out of the sleeping bag to sit next to Otacon on the floor as he lit the match, apparently debated with using one of the candles to light the others, and then just gave up and lit all eight with the match. “So…now what?”

“Uh.” Otacon pushed his glasses up. Cleared his throat. “Um. Well, let’s see.” He rubbed his nose, stalling. “Baruḥ atah adonai, eloheinu meleḥ ha’olam...” Otacon cut off, abruptly, sighed, pushed his hands under his glasses to dig the heels of his palms into his eyes. “Shit. I usually google the prayers but we don’t have internet.” Snake didn’t say anything—he had the feeling if he asked Otacon to wing it, he’d just get upset. “Uh, who taught us to light candles?”

“Amen,” Snake guessed. From the way that Otacon’s shoulders relaxed, it had been the right guess.

They sat there then, in the quiet except for the blizzard blowing against the windows, the yellow light from the candles flickering over their faces. After a few minutes in companionable silence, Otacon sighed the heavy, put-upon wheeze of a man with a guilty conscience. “I feel like there’s a third prayer, but I always forget what it is.”

This time, it was the right thing to say. Otacon smiled. “Baruḥ atah adonai, eloheinu meleḥ ha’olam—Ḥannukah is super rad and I’m glad I get to spend it with my friend.” He laughed.“I’m pretty sure that’s not the prayer, but it’s probably close enough.”

“Amen,” Snake agreed. He pressed their shoulders together. “I liked it.” The cold outside had been seeping into his bones bit by bit, a slow, agonizing drip of ice that had been bleeding into his body one breath at a time. It was impossible to escape depression out here: it was hiding out in the darkness, squatting and breathing steam while he prayed they’d have a lead so they could get the fuck out of here.

But their eight little tealights, hardly more than match-flames in the darkness, beat it backwards—just a little, just long enough that Snake could see their way back out, and to something better.

“This is a good holiday,” he murmured into Otacon’s hair as his partner dozed off on his shoulder. “Let’s do this next year.” 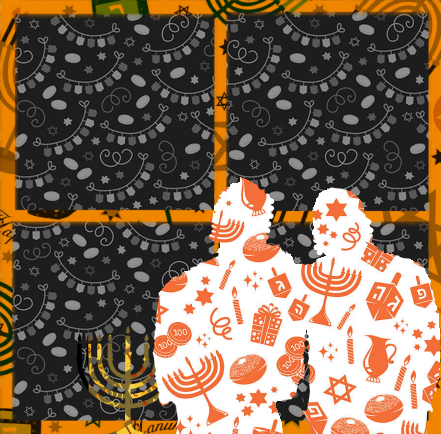