Discovered in a Photo Album

Written and first posted in July 2017, this was Inspired by a lovely photo of MS in his cricketing whites, looking quite the batsman, which made me think that perhaps Bodie isn't the only cricketer in the family... 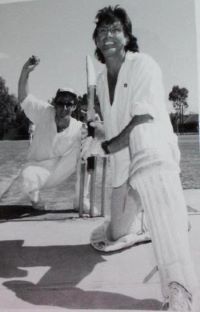 “Oh, look at you here!” Bodie nudged Doyle in the ribs for about the fifth time in as many minutes. “Blimey, this must’ve been over twenty years ago. Do you remember this, Ray?”

With a sigh of one who keeps getting interrupted, Doyle glanced yet again from his kindle to the large photo album open on Bodie’s lap. There, a joyful image of his younger self playing cricket smiled back at him, conjuring up bitter-sweet emotions. How he’d love to have all those wonderful years over again. And yet, wasn’t he lucky to have had them at all, with the man sat snugly beside him.

“Course I remember it,” he said gruffly. “I had to step in for your lot at the last minute, when one of your reprobate mates failed to show up. Quite the debut, it was,” he added proudly.

“Yeah, it was a great knock," agreed Bodie. "The lads were bloody impressed, they had no idea you used to play for the Police team. It’s not like you to hide your light under a bushel.”

“How dare you,” said Doyle, with fake umbrage. “I’ve always let my talents speak for themselves.”

Bodie smiled. “Can’t deny you’re a man of many talents.”

Doyle took off his glasses and looked at Bodie suspiciously. “What are you after?”

“Nothing,” said Bodie, with a wounded expression. “Can’t a fella pay a compliment to the love of his life, without having an ulterior motive?”

“Not when he’s usually taking the piss out of him, no,” replied Doyle, firmly.

“Oh, don’t be like that…” Irresistible blue eyes gazed at Doyle lovingly, as a warm hand ran up his thigh, thumb coming to rest gently on the swell of denim at the top. “I just thought… perhaps you might fancy showing me one of those many talents now,” Bodie suggested huskily, thumb circling with a light but insistent pressure.

Knowing all too well when he was beaten, Doyle put his kindle down. “I might be persuaded,” he said, trying to keep his voice steady. “What did you have in mind?”

The photo album slid to the floor with a thud, as Bodie leaned in, took Doyle in his arms and kissed him deeply. Eventually drawing back, he answered, “A cup of tea would be nice, thanks love.”

The cushion fight that ensued was lively.