Want to know where your donations are going? Check out our latest budget update and donate today! We've raised US$261,049.00 towards our goal of US$50,000 so far!

What a World of Merriment

I, laughingacademy, have not given my permission for my work to be posted on any third-party website or app .

Extract from the diary of Honoria Lucasta, Dowager Duchess of Denver

9 December. Mary and Peter to tea. Ahasuerus spent the better part of their visit in Mary’s lap buzzing like a beehive, most unlike him. Perhaps he was channeling her mood, which was very gay — her husband being out of town for a conference, she’d arranged for a neighbour to mind little Charles Peter and Mary Lucasta while she and Peter attended a Film Society screening of works inspired by Edgar Allan Poe. Marriage and motherhood suit Mary wonderfully, but I am glad she hasn’t abandoned all other interests, as some women do. Peter, on the other hand, was in low spirits at first, fretting about leaving Bunter to fend for himself, but I assured him that the poor man was entirely capable, slapstick and ice slicks notwithstanding, and would enjoy a respite from being hovered over. He cheered up when I reminded him of how my brother Paul had read to him (that is, Peter) out of Baudelaire’s Histoires extraordinaires when he’d been sick in bed with ‘flu as a youngster. I had wondered at the time if the stories would give him nightmares, Peter having always been sensitive and high-strung, but he’d positively thrived on them, like a little ghoul. Peter recalled that “Uncle Pandarus” had given him the book soon afterwards, and that a few years later he (that is, Peter) had loaned it to Mary. She confessed that she had left it in the library at Denver. It will probably remain there undisturbed for the foreseeable future, as Gerald has never been much of a reader, while Helen would probably find EAP too florid in English, never mind translated into French, and far too morbid in either language ...

Harriet pushed back from her writing-table with a sigh and looked over what she had written. It was properly spelled and grammatically correct, but that was about all one could say in its favour. Shrugging, she riffled through the pages, put them in order, numbered them, squared them, and set them in the tray reserved for the raw materials that Miss Bracy, her secretary, would transmute into neatly typed manuscripts on Monday. That done, she made herself a cup of tea in the kitchen, took it back to the study, and drank it standing up, staring blankly out the window. Frost had crept up the glass, obscuring her view of Mecklenburgh Square. She felt as though some person or persons unknown had, as quietly as the frost, slipped behind her and scooped out a portion of her brain, then filled the resulting hollow with foreign material — wet newspaper, perhaps, or possibly mud. What was it that Charles Darwin had written in that letter?

“I am very poorly today and very stupid,” she quoted aloud, rubbing the bridge of her nose, “and hate everybody and everything.”

This would never do. If she spent the night fretting and stewing, it would most likely ruin any chance of turning out readable copy the following day. She should sally forth, find some distraction, then get a good night’s sleep and come back to the story with fresh eyes. It was a Sunday … hadn’t Sylvia Marriott and Eiluned Price said there was something interesting being shown at the Academy that evening? Yes, that’s right, two Poe films: a French silent, La chute de la maison Usher, and some ridiculous in-name-only Hollywood confection. Perfect. A brisk half-hour’s walk should get her there with time to spare. Oh, and she mustn't forget that thing she wanted to show them ...

“‘It all sounds like a lot of supernatural baloney to me,’” Mary said in her best attempt at an American accent.

“‘Supernatural, perhaps,’” Peter replied, making a goulash of the vowels as he held up her coat. “‘Baloney, perhaps not.’” He was caught off guard when another voice — low, female, familiar — chimed in with, “‘There are many things under the sun.’”

“Harriet!” he exclaimed, turning eagerly once Mary had her arms in her coat sleeves.

“Not at all. I don’t believe you’ve met my sister. Lady Mary Parker. Miss Harriet Vane.”

Harriet, with some trepidation, held out her hand. “How do you do?”

“How d’you do? So glad to finally meet you. Won’t you introduce your friends? Though — I say, isn’t that Eiluned?”

“Oh, hello! I thought you looked familiar, and not just from the society pages. It was at the Kropotkys’, wasn’t it? You were there with, ah…” Sylvia’s elbowing was unnecessary, Eiluned having recognized, though too late, the faux pas.

“With George Goyles, yes,” Mary said tranquilly. “Gracious, it’s been ages since I’ve heard anything of him.”

“Just as well,” Eiluned sniffed. “What did you think of the films?”

“Marvelous! Both very dreamlike, each in their own way. Also, I hadn’t realized how attractive Karloff is. But then, I’m partial to tall men.”

Peter, who’d been observing this interaction with no small amusement, raised a hand. “Motion to adjourn to some more salubrious location. I’m afraid we’re rather in the way, standing here in the lobby.”

This suggestion was met with a flurry of activity as Harriet and her friends began pulling on coats, scarves, and hats. Mary looked at her wristwatch and clucked her tongue. “Dear, dear, I must be heading home. Miss Vane, I’m sorry to cut out on you like this but Mrs. Collins is watching the children and I promised not to keep her too late. Peter, you should bring her around to dinner one evening, I’m sure Charles would be delighted. Oh, and do tell Bunter I wish him a speedy recovery. There’s a cab. Good night, everyone!”

“I like your sister,” Harriet commented, watching Lady Mary chase a taxi down Oxford Street. The group started moving in the opposite direction, towards Oxford Circus. “What was that about Bunter?”

“Hors de combat, poor fellow. Put a foot down wrong on a frozen puddle and bunged up his ankle.”

“Ankles are the devil,” said Sylvia. “I hope you’ve had a doctor in.”

Eiluned, who had been rummaging through her pockets in search of her gloves, pulled out a postcard. “Oh, Harriet, better take this back. I think I’m going to call it a night, I feel one of my headaches coming on.”

“I’ll go with her to make sure she gets home safely,” Sylvia said, threading her arm through Eiluned’s. “Good night, and Merry Christmas.”

“I don’t believe that woman’s ever had a headache in her life,” Peter announced as the pairs parted. “What was that she handed to you?”

“It came in the post. I can't tell if it was meant as a joke or a dig, but it cheered me up no end.”

He squinted at it and did a double take. 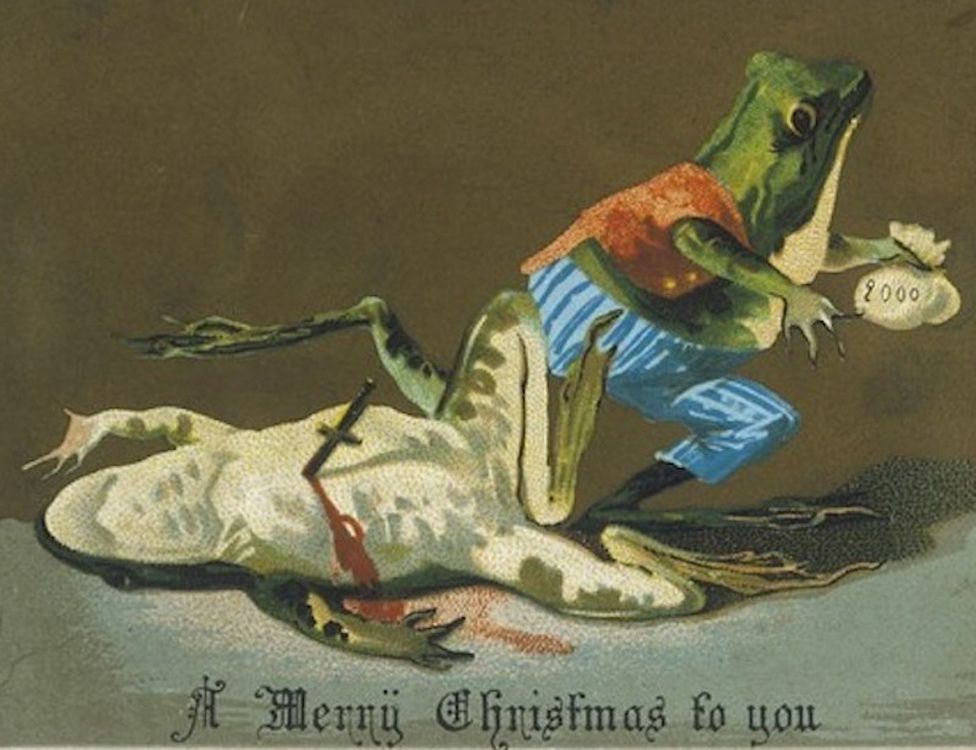 “Ah,” he finally said. “Nothing conveys the Yuletide spirit like a spot of batrachian larceny and murder.”

“Precisely what I thought,” she said. “I don’t suppose you can decipher the sender’s name?”

He paused under a streetlamp. “Alas, no. It’s too badly smudged. I’m frankly amazed the postman managed to decipher your address." He studied her as she tucked the card in her handbag. "Have you needed cheering up?”

“The past week has been pure drudgery, but I’m in much better spirits now.”

“Is your morale high enough to withstand a late supper?”

“Excellent. Here comes a taxi. What a pity it could not be a hansom cab. Or better yet, a sleigh.”

“‘Hear the sledges with the bells — silver bells!
What a world of merriment their melody foretells!
How they tinkle, tinkle, tinkle
In the icy air of night!
While the stars that oversprinkle
All the heavens, seem to twinkle
With a crystalline delight ...’

“Wups, step lively, or that disagreeable looking gent in the top hat will pinch our ride.”

Later, at Ferrara’s, during an involved discussion of the enduring legacy of Poe (“Of course, and the ‘Ourang-Outang’ of Rue Morgue would account for the recurrence of hairy, clawed hands in the old-dark-house genre ...”) and the pitfalls of translating between languages and mediums, he asked for another look at the postcard and made a note of the printer’s mark. 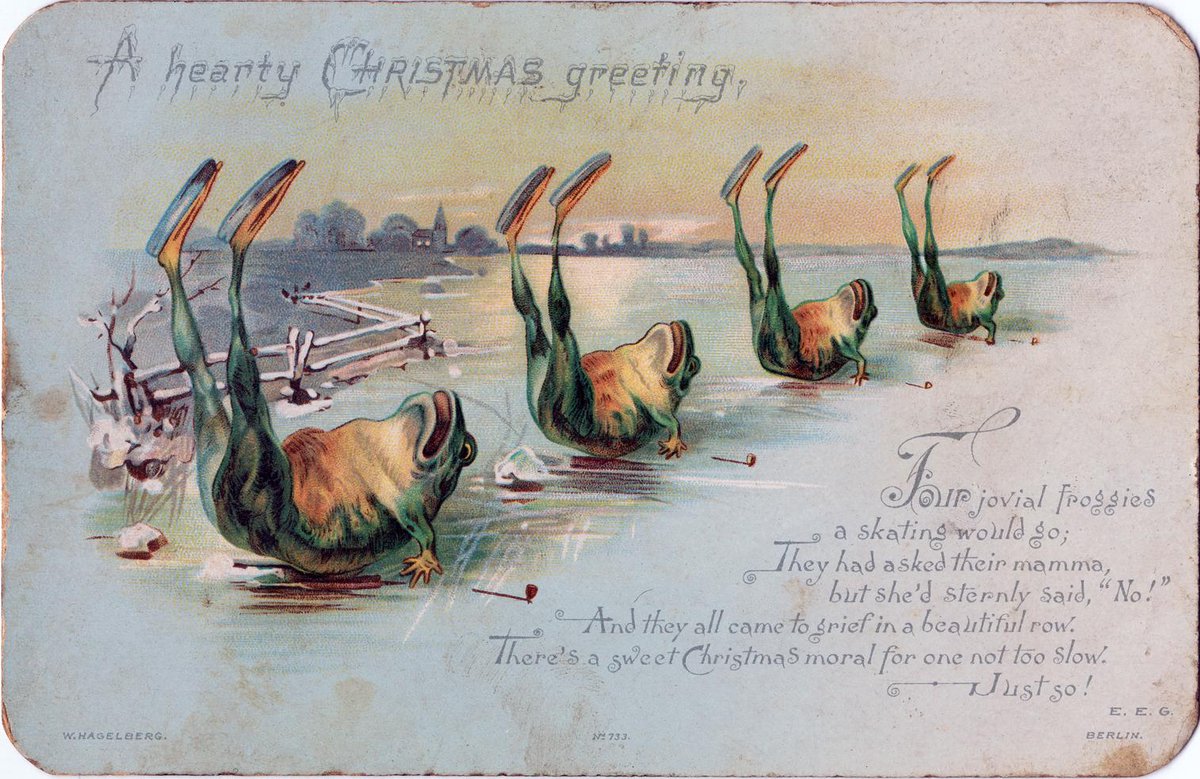 ”Thank you, my lord, and a very Merry Christmas to you as well.”

This story takes place in December 1934, the winter before Gaudy Night.

The title is a line from Edgar Allan Poe’s poem "The Bells," the opening stanza of which Peter starts reciting while hailing a cab.

The Academy Cinema was an art-house theatre located at 165 Oxford Street, Westminster, and operated by the Film Society. While it might have screened Jean Epstein’s 1928 silent film adaptation of The Fall of the House of Usher, it’s unlikely they would have run 1934’s The Black Cat, which is what Peter and Mary quote at each other — a pity, since director Edgar G. Ulmer got career highlight performances out of Bela Lugosi and Boris Karloff in a story of betrayal, vengeance, sadism, Satanism, and necrophilia.