Namjoon stands in a pavilion at the top of a hill, a garden stretching out before him.

for jae, from the sneaky sneak who sneaks 💛🐳💜

Namjoon stands in a pavilion at the top of a hill, a garden stretching out before him. Beside the pavilion an ancient tree weighed down with plum blossoms sways in an imaginary wind. Everything is painted in shades of blue and purple. Sunlight plays across the wooden boards beneath Namjoon’s feet in the patterns of light on the seafloor. A jellyfish floats by the pavilion at eye-level, and a school of fish dart close to Namjoon before changing direction and swimming away.

In the distance, other sea creatures also move through the air as if it were water. A couple of sea turtles glide close to the path that leads down the hill. Fish of every shape and size glimmer in the sunlight. In the distance, a whale emerges from behind from one cloud before disappearing behind another.

Namjoon takes a deep breath and smiles. There’s something calming about the underwater garden, a tranquility to the filtered light and the sea creatures flitting about. It’s unlike any illusion environment Namjoon has ever been in— and he’s been in plenty. Everywhere he looks he’s met with lovingly-crafted details, from the roughness of the wood beneath his palm when he places a hand on the pavilion’s railing to the individual scales on a fish that comes right up to Namjoon’s face.

Illusion environments usually last for half a day before they begin to fade and need to be reimbued with magic. Namjoon could stay in this one for hours, and would, if not for the fact that Yoongi is waiting for him. He gives the garden one last wistful look before murmuring the key spell that will return the environment to its storage charm. The garden fades and then blinks out of existence. Just like that, Namjoon is back in his living room. The storage charm, a piece of sea glass attached to a necklace and hung around Namjoon’s neck, flashes once before turning dull.

“Well?” Yoongi asks. He’s standing at the edge of the kitchen, just outside the illusion’s parameters. His hand hovers close to his face, and even from this distance Namjoon can tell that Yoongi has been worrying at a hangnail on his thumb. “How was it?”

“It was—” Too many words tumble into Namjoon’s head, and he has to pause to sort through them. “Beautiful. It’s beautiful, hyung.”

“Yeah?” Someone who doesn’t know Yoongi well might miss the way his shoulders relax and his ears turn pink. But Namjoon has known Yoongi for ten years, lived with him for nine, and dated him for five. To him Yoongi’s relief is obvious.

Yoongi flushes for real and smiles, big and gummy. “Better than the mountain stream?”

Yoongi has been making illusion environments for years now. He was one of the very first creators, already on the market when a popularity boom hit two years ago. His environments are art; intricately crafted illusions that will transform any closed space, up to a certain size, into an entirely different world for anyone within their parameters.

Namjoon has watched Yoongi craft countless environments, seen firsthand the dedication that goes into the process. Yoongi’s environments are some of the best— the best, if you ask Namjoon, although he’s slightly biased. The mountain stream was one of Yoongi’s first environments, but it’s a blueprint that he’s built on over the years, slowly expanding and adding details. Tiny frogs and shimmering lizards and leaves that change with the season. It’s always been Namjoon’s favorite. But—

“Yeah, better than the mountain stream. Just one thing, though...” Namjoon tries to pull the necklace over his head and it gets stuck, somehow caught on both his shirt and an earring. He sighs and attempts to untangle it as he continues, “Is there any way to make the whale come closer? I wanted to get a better look at it, but it was so far away.”

Yoongi snorts. He walks over to Namjoon and gently helps disentangle him from the necklace. “Yes, Joon-ah, the whale comes closer,” he says as he works. His fingers are cool where they brush against Namjoon’s skin. “I have all the animals on varied rotations. The whale comes near the pavilion every hour or so. There.”

He leans back, necklace in hand. He’s smiling at Namjoon, soft and fond, and Namjoon can’t help but smile back. Namjoon is so busy smiling, in fact, that it takes him a few seconds to realize that Yoongi is holding the necklace out to him.

“What?” Namjoon says again, and Yoongi rubs at his neck with his free hand.

“I know you’ve been stressed with your exam coming up and I thought, you know… you can take your books into the illusion with you, so I thought maybe you could do some of your reading there. Or something.”

Namjoon glances at the stack of books sitting on their coffee table—all the legalities of contracts that can be formed with any of the 132 types of spirit that find business with humans mutually beneficial and are willing to be summoned—and thinks of his exam, still a month out, that will determine whether he becomes a licensed summoner or not. He thinks of Yoongi watching him study and struggle and work himself to exhaustion for the past four years as he worked towards this point.

Thinks of Yoongi, in the tiny studio he rents for his workshop, poring over the ocean garden. Mumbling, Joon-ah likes whales, I need to make sure to add one, and humming under his breath while calculating the different animals’ movement cycles. Immersing himself in the illusion as he perfected every painstaking detail.

Yoongi leans into the kiss with a happy sigh before gently pulling away. He wraps his arms around Namjoon’s waist and holds him close. “When you pass your exam and summon your familiar,” he mumbles into Namjoon’s shoulder, “I hope you summon a dog. Then we can finally get around this building’s dumbass no pet policy.”

Namjoon laughs and hugs Yoongi tight. This is something they’ve learned over the years— how to hold and be held, how to fit together. It took a while, but they’re here now, and Namjoon couldn’t be more grateful.

“A dog would be cool,” he says, even though he’s secretly hoping for a frog. Or maybe a ferret. A dog would be nice, too, though. He knows how much Yoongi has been wanting one. Namjoon turns his head so that his cheek is resting against Yoongi’s hair and says, more quietly, “Thank you.”

“S’nothing. I wish I could do more to help.”

“You help me so much, hyung,” Namjoon says. “Every single day, just by being here.”

“Yeah,” Namjoon agrees easily. And then, “I love you.”

“Love you too.” Yoongi presses a kiss to Namjoon’s jaw. Then he pulls away from Namjoon and dangles the necklace before him. “Wanna go back into the illusion together? I was watching your reactions from outside, but I’d like some more direct feedback.”

Namjoon grins and grabs Yoongi’s free hand. “Yes,” he says. “Absolutely.” The only thing more fun that exploring an illusion environment is exploring one together with Yoongi. The real world and Namjoon’s studies can wait a little while longer.

Yoongi squeezes Namjoon’s hand and speaks the key spell. The underwater garden unfolds before them and, together, they step inside. 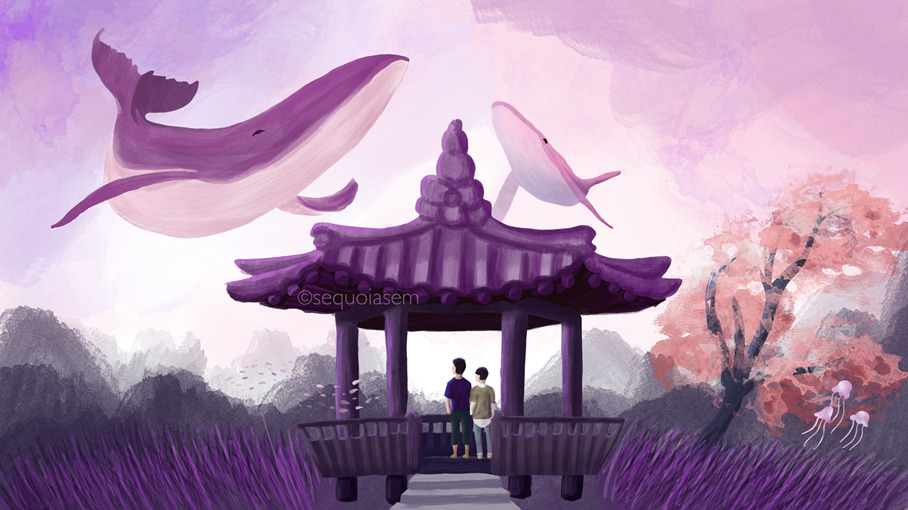 She was kind enough to allow me to upload it here, but please do not reupload or use it anywhere without her explicit permission!!!

When Namjoon passes his exam and summons his familiar, the animal that responds to his request is not a dog, or a frog, or a ferret, but rather a cat. Neither Namjoon nor Yoongi have any idea what to do with a cat. They call Jimin in a panic, and he laughs at them for a solid ten minutes before coming over to help.

Turns out she is more than capable of communicating her needs to them, and they don't end up needing Jimin's help (much). Her hobbies include riding around on shoulders and napping in the clean laundry. RIP Yoongi's mostly-black wardrobe.

If you have any questions about this AU, feel free to drop them in the comments and I'll do my best to answer 💜