A Little Tied Up

Harry loses a bet and has to pay up. 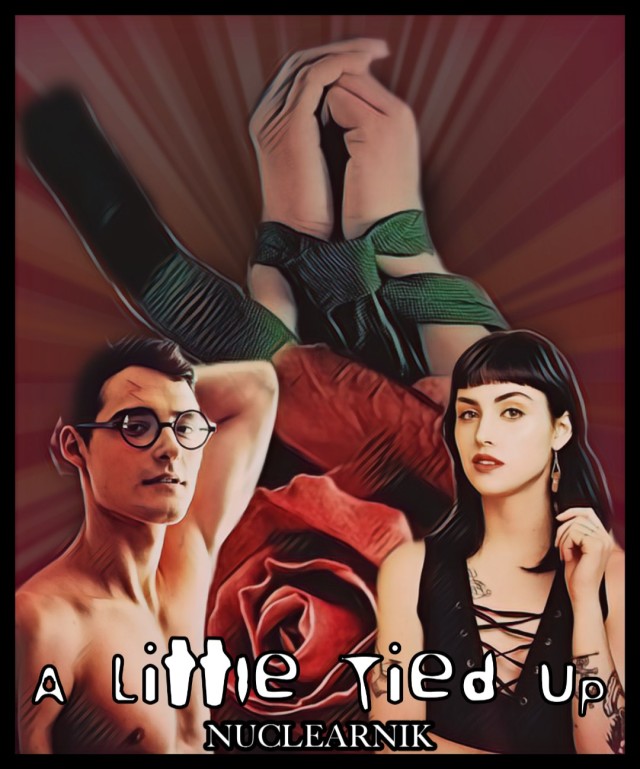 Harry wasn't exactly sure how he'd gotten himself here.

Here being the spacious bed upon which he was naked and tied to the headboard of.

Just his wrists, though. The headboard was wrought iron and unbelievably sturdy. He knew that because its durability had been tested many times in the year he and Pansy had lived in this flat.

"Are you comfortable?" asked the green-eyed temptress clad in black, hip propped against the door jamb.

"With such a luxurious bed, I was bound to be, don't you think?"

The corner of her mouth turned up at his quip. "What does that bring us to?"

Pansy and Harry were engaged in a lengthy, ongoing competition over who could make the best puns. It certainly wasn't the first thing Harry would have thought he might have in common with the sultry witch, but as it turned out, they both had a secret love for atrocious jokes. Who knew?

"How perfect!" She walked, or rather, strutted over to the bed to run her fingers over the silk tie looped around his wrists, leaning close to whisper in his ear. "Looks like we'll need a tiebreaker."

She pulled back with a triumphant expression that Harry wanted to kiss right off her face.

He tugged at his bonds, saying, "Alright, you've had your fun. Untie me."

"You lost a bet fair and square, mi amor. Time to pay the forfeit."

"Ah yes, but was it in writing? A legally binding contract, perhaps?"

Pansy shook her head at him, her mouth twisted in a smirk.

"You're an idiot, Potter. Now stop talking and let me work."

Last Friday at the pub down the street from where they lived, they'd partied just a tad too hard in their quest to celebrate the end of the workweek. Before they knew it, they were challenging each other to a drinking contest—who could down the most shots of Firewhisky in one minute.

Harry had been entirely confident that he would best Pansy. He could drink the Weasley twins under the table, after all, and that was saying something—those two knew how to have a good time.

It had been stupid, and Merlin, had they ever paid for it the next morning.

But what was even worse than the raging hangovers they'd both woken up with was that Harry had not, in fact, bested Pansy, therefore losing the bet and a just a little bit of his pride.

It was never wise to make a bet when you were well on your way to pissed and entirely overconfident in your abilities.

When it came down to it, though, he supposed the forfeit wasn't all that bad.

If Harry had won, Pansy was going to let him do that one particular thing in bed that he'd been fantasizing about forever.

Instead, Pansy won, which meant she got to tie him up and shag him—something she'd been fantasizing about.

It was a win-win, really. They liked to experiment, and though Harry usually preferred to be the instigator when it came to bedroom activities, he had to admit that being at the mercy of his sexy-ass witch was kind of turning him on.

Okay, really turning him on. What could he say? He was an easily pleased bloke.

Resting one knee on the bed, Pansy ran a hand down his chest. The fingers of her other hand danced over the hem of her floaty nightgown, tugging it up ever so slowly to reveal the smooth skin of her thighs.

A finger beneath his chin pulled his gaze away from her delicious legs and back to her face.

It was clear Pansy was enjoying this way too much. He wasn't surprised—teasing him was one of her favourite pastimes.

He refused to speak, instead giving her his best smoldering look, hoping to goad her into touching him some more.

"Ah yes, you're so intimidating. My big, strong, captive boyfriend." As she spoke she marched her fingers up his chest, pausing to flick back and forth over his nipple until he made a noise in his throat. After what felt like ages, she finally leaned toward him, devouring his mouth—demanding and wet and perfect. Her teeth dragged over his bottom lip, pulling on it just a bit before releasing him.

So lost was he in their kiss that he hadn't noticed the hand creeping up his thigh. All at once, her hand closed over his cock just right, and he bit back a groan.

When she broke the kiss, she trailed her mouth over his jaw, down his neck and across his torso. And then her lips were parting around him, and she pulled him into the hot, wet suction of her mouth.

She did some fancy twist with her hand as she hollowed her cheeks, and he just about saw stars.

"Fuck, Pansy. Fuck me already, would you?"

She pulled back, swiping the back of her hand across her mouth, grin on her face as she said, "Okay, but only since you asked so nicely."

Pansy straddled him, rucking her dress up to her waist and sinking down onto him with a precision that he would have admired had he been of sound mind at that moment. Instead, his eyes rolled back in his head.

Harry moved his hips experimentally, finding a rhythm that matched hers, and as she pressed her hands to his chest to give herself leverage, he decided that laying back and enjoying the ride had its perks.

She moved above him, so perfectly feminine, looking like a goddess come to earth to tempt him with desires of the flesh.

The sensations he was feeling overwhelmed him, and he lost track of time. Before he knew it, Pansy was grinding her hips in little circles over him, repeatedly muttering, "Yesss"  under her breath.

Then she was clenching around him, tight and perfect and pushing him right over the edge to his own peak.

In the sweaty aftermath, when she'd freed his wrists and collapsed atop him, one thought went through his mind.

How did I get so lucky?

After Ginny, Harry had thought he might be a loner forever. But then Pansy came along. She'd turned his world upside and won his unending devotion with her sharp tongue and secretly soft heart.

Needless to say, he was very happy to finally be tied down.