Tony gets taken during a fight. Bucky is trying not to panic, but The Asset knows exactly what to do.

“I think the armor is down,” Hawkeye says, hard to hear over the wind rushing past him.

Bucky slams his metal fist into a Hydra goon’s face, tightens his grip on his gun and spins to face the rooftop where Clint is posted. “What’s happening?” He demands even though he knows, he knows what happens next, his heart is in his throat, racing painfully. He knows .

There’s a long pause, just the sound of fighting filtering in through everyone’s comms, the sound of Clint’s even breaths and pounding footsteps as he tries to get a better vantage point. “Shit,” he says “shit, they’ve taken Iron Man.”

Bucky’s brain fuzzes out. The Asset takes over.

Tony wakes up to multiple pairs of hands prying the dead armor away from him, cold air and everything aching, which is probably his least favorite way to wake up.

“Alright, but who’s buying me dinner?” Tony asks, blinking sluggishly, his arms too slow as he tries to raise them, his reflexes too slow as he’s hauled out of the remains of the suit. He forces his eyes to focus, his head spinning, the ground rumbling beneath his knees. A truck, he’s in a truck, they’re moving, they’re taking him somewhere.

“This is a terrible idea,” Tony tells them helpfully, then one of the masked goons hits him across the face and everything goes fuzzy.

“We’re not done with this fight, get back here!” Steve sounds tired, and frustrated and worried, and he grunts as something hits him. Bucky feels a little bad. The Asset does not.

“I know where they’re taking him,” Bucky snarls into his comm. He’s in Hydra’s garage. The Asset can drive anything. He choses a bike, kicks it into gear, and Bucky says “you can follow me if you want but I’m not slowing down to wait for you.”

He can't let them hurt Tony, he can't. They can't. This is what Bucky has been terrified of, this is what wakes him up in the dead of night in a cold sweat, has him pulling Tony into his arms while Tony mumbles out sleepy confused noises. This is what The Asset has been preparing for.

“You’re terrible at this, you’re not even asking any questions,” Tony points out, and then groans as Masked Goon #3 hits him across the face again. His eye is starting to swell shut, and Tony is pretty sure at least one of his shoulders has been ripped out of its socket. Hard to tell, his arms have been above his head for so long he can’t really feel them anymore, his cold toes barely touching the ground.

Masked Goon #3 hits him in the side this time, knocks him back against the wall and Tony bites down a groan.

"At least try to make me build something, this is just a waste," Tony points out, and on the next punch he feels something crack, tastes blood.

The Asset likes Tony. The Asset doesn't like anything, really. Just fighting. The feel of a new gun. And Tony.

Because Tony knows. Tony calls him 'Snowflake' when he's The Asset and 'Buckaroo' when he's Bucky and Tony always gets it right. He gives the Asset new guns. Always lighter. Always more powerful.

Tony always knows. Nobody else. Nobody knows about The Asset, what it means when Bucky goes still and quiet and his eyes go hard. And Bucky can't find the words, doesn’t know how to explain it. So no one knows. No one but Tony.

There's not many things Bucky and The Asset agree on. The importance of a well maintained armory. Taking down Hydra. And Tony, always Tony.

The goon squad leaves Tony alone, which really, people should know better than that by now.

He braces his feet on the wall, slides his bloodied hands free of the shackles with an agonizing tug that has him nearly whiting out. Tony hits the ground hard, has to lay there just panting for a second even though every breath is agonizing, and apparently he’s bleeding because his flight suit is wet and tacky against his torso.

Finally Tony pushes himself to his feet, and the cell is empty but maybe if he can get out he can find something, anything. Maybe he can get out of here.

The base is quiet when The Asset arrives. They’re not expecting him. No one ever does. Hydra turned him into a shadow, and now he is going to take them apart.

He moves through the compound like a ghost. He kills everyone. The blood is warm on his hands and the small bits of his exposed face. The Asset only feels cold. He has to find Tony.

Tony is never afraid, no matter who he is. Tony falls asleep on Bucky’s shoulder, and when he wakes up to The Asset he smiles. He takes The Asset’s hand, leads him away when a fight is over. Never afraid.

The Asset kills anyone who gets in his way. He has to find Tony.

"You should really just... let me go, pretend you never saw me," Tony says, shaking hands held out in front of him. He’s trying to look harmless, knows he probably looks pathetic more than anything with his face busted up, hunched over to protect his cracked ribs.

For just a second, it looks like Masked Goon #7 is actually considering it. Tony has been following the exit signs and he’s so close, he can just tell how close he is to freedom. There’s only the seemingly least aggressive member of goon squad between him and his goal. But Tony’s shoulders are too busted to lift the gun he found, his hands shaking too badly to aim it.

The goon hesitates, and for a second Tony dares to hope. Then a fist comes crashing into his gut and knocks Tony to the ground.

"This is a mistake," Tony coughs out as the goon drags him back to the miserable little cell, “big one. Huge mistake.”

“You will die here,” Masked Goon #7 snarls, pauses just long enough to kick Tony in the head before he resumes dragging.

"Maybe," Tony says, because he knows when to be a realist, and they won't leave him alone again. "But so will you.”

The Asset kicks in the cell door, but it’s Bucky who raises the gun to shoot the first guard in the back of the head. The second has barely spun around before The Asset takes out both his knees, leaves him writhing on the ground. His screams are meaningless, everyone in the base is dead. The Asset only cares about-

The figure dangling from the ceiling, bloody arms wrapped in chains, is hardly recognizable. Too silent. Too still. Tony is neither of of those things, even in his sleep he tosses and turns and mumbles to himself. Bucky thinks it’s adorable. The Asset thinks it’s fascinating. But the figure is completely still, too still, covered in bruises and so incredibly pale. Bucky makes a hurt noise, deep in his chest.

Tony wakes up because it sounds like Bucky is in pain, and Tony has to wake up, he has to help, he has to drag Bucky out of whatever nightmare he’s caught in. Except when Tony wakes up he’s the one in pain, and for a minute all he can do is gasp in agonized confusion before he remembers, braces for the next hit.

But nothing comes, and when he opens his swollen eyes Masked Goon #7 is on the ground and he’s the one bleeding, the one screaming. Tony doesn’t know what’s happening here, but he really hopes it’s some kind of rescue. He doesn’t have the energy to escape again, he really doesn’t.

He forces his head up a little more and there’s Bucky, grip white knuckled on his knife, mask and goggles in place and properly terrifying.

“Told you,” Tony says smugly, hopes he gets his point across even though his voice is weak and shredded. Masked Goon #7’s eyes go wide as Bucky stalks towards him and he’s in full Winter Soldier mode, Tony can tell by the way he moves. “Should have let me go, man,” Tony says, slurred and lazy because everything is going to be okay, he can relax, even as the goon starts screaming again, as Bucky drops a knee into the goon’s chest and slits his throat.

He can relax now.

“Hey snowflake,” Tony slurs out as The Asset sets him gently on the ground. His bloodied fingers reach up, tug the mask and goggles from the Asset’s face.

Bucky frowns, worried, and terrified, Tony is too pale, his fingers too cold against Bucky’s cheek. The Asset is still seeing red.

Tony just smiles, weak but real, reaches up to wipe the frown Bucky’s lips with a shaking thumb. He wipes blood and grease paint from the Asset’s eyes. Tony is mostly just smearing his own blood everywhere, making a mess. Bucky is elated, and his heart is breaking, his fingers ghosting over the bruises on Tony’s skin and he wasn’t fast enough, he wasn’t fast enough . The Asset is still angry. He’s still so angry. He’s shaking with it.

“Look at you guys, getting along,” Tony says, drags his fingers through their messy hair, pats them on the shoulder even though that has to hurt, it has to. Tony is completely unafraid.

Bucky chokes out a wet laugh and The Asset leans down to press his forehead to Tony’s. “Tony,” they say, broken open, completely in agreement. “ Tony. ”

“Bucky,” Steve says, his hands up. The shield stays on his back. “Buck, it’s me. We followed as soon as we could, but it doesn’t look like you need any help.” Steve snorts, a little amused, a little worried. The Asset always worries him, the Captain just hasn’t figured out what he’s looking at yet. He takes a step forward.

The Asset tries to snarl again. Bucky swallows it down, clears his throat, says “get a stretcher, he’s hurt real bad.”

“I can walk,” Tony protests, still slurred, his voice weak.

The Asset whirls on him. Furious. “You will not walk,” he snaps. He feels bad afterwards. Tony is hurt. Bucky wouldn’t snap. Bucky always knows what to say, what to do, how to help, how to be good. The Asset only knows how to hurt. He wishes there were more people to hurt.

The Captain is tense in the doorway. Tony just smiles, pats the Asset’s cheek. “Yes dear,” he says. Completely unafraid. 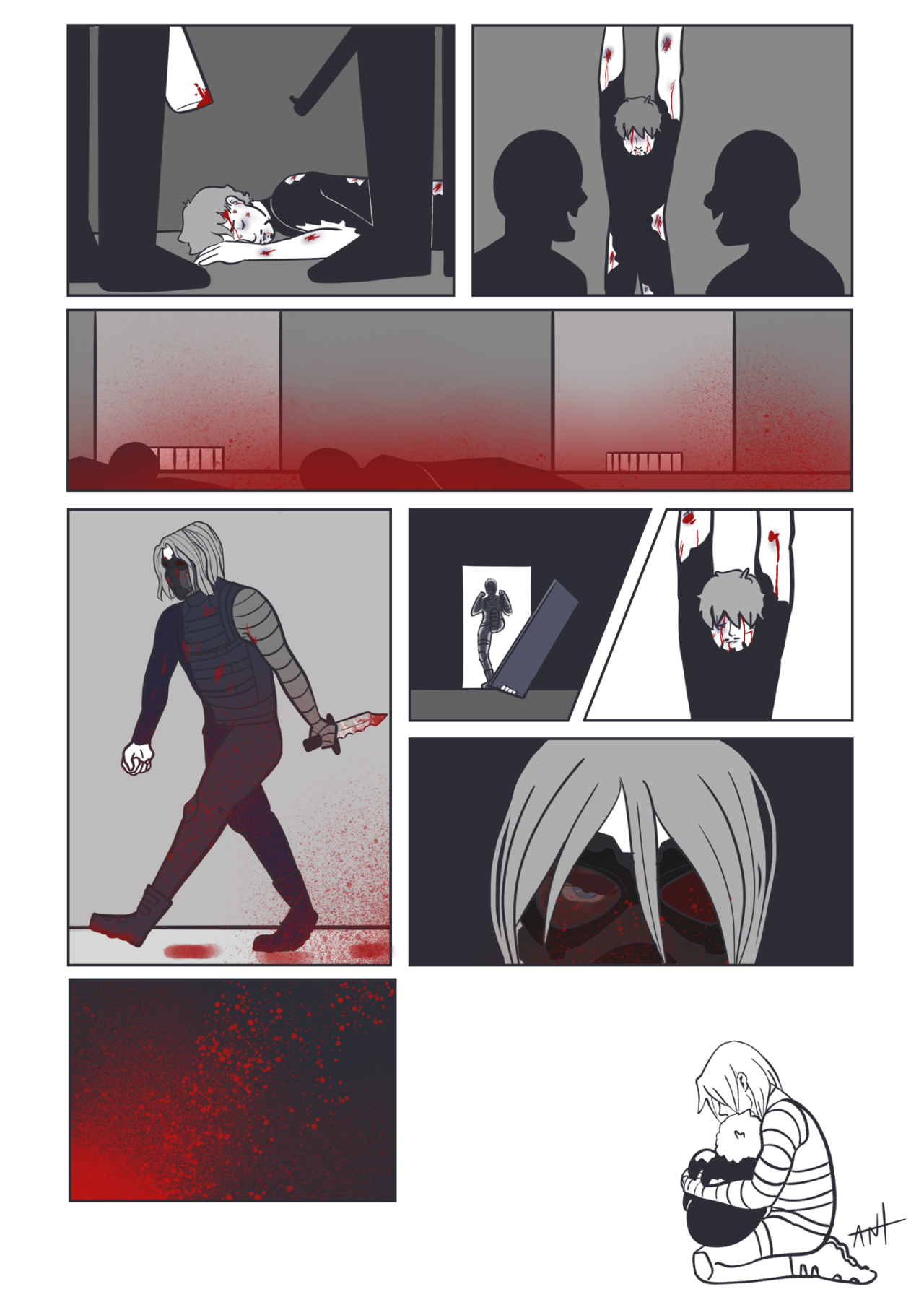