“Misaki,” Usagi called from the couch, “I think we should talk about something.”

That's weird, Misaki thought. Usagi sounds so serious. “Okay, let me start the dishwasher...” He hit the button and then joined the author in the living room. “What's wrong?”

“Nothing is wrong. You know next week is the big meeting for the movie. All the main cast and crew will be there, including me.”

“So, we need to decide on something, now that this is really happening.”

“As far as I can tell, Usaka has assembled as many LGBT people as he could to work on this film. It's not just going to be a movie about a gay couple, it's going to make a social statement. A big one. And it's going to get a lot of attention from the press. He's not planning to reveal any details yet, but my involvement will be noted. Then, once the real plot is known...it's going to cause an uproar. We...no, I...will get a lot of attention. More than ever before.”

Misaki stared at him. “So, we need to be more careful from now on. It's going to be a pain, but you've dealt with the press.”

“Not like this. Especially after the fuss about Haruhiko. I think you can expect paparazzi camped out in front of the apartment. You will be noticed. They will research you. And they will put two-and-two together.”

“You are going to be out, as well as me. Unless we take steps right now.”

Out? The whole world will know Usagi and I are...! “No! That's not possible! I can't! What about work? What about your writing?” Misaki jumped up and started pacing, not seeing the hurt on Usagi's face.

“Misaki. Calm down. First, I don't think my sales will be affected at all. Yuki Eiri got more popular once his relationship with Shuichi was revealed. And Isaka, Kirishima, Aikawa – hell, I bet most of Marukawa already know about us. You won't be fired.”

“That's your fault! You always make a damn scene! But it's one thing for the company to hide it, and something else for the outside world to know. They could still fire me.”

“They won't! I'll personally out Isaka if he tries it! And the workers there would support you – that place is crawling with gays.”

“Out Isaka? What are you talking about?”

“Isaka and Asahina. They've been together forever. Anyway, it will just be free publicity for Marukawa and he knows it.”

Misaki was in a full-blown panic, nothing was making sense. Usagi got up and tried to hug him only to be violently shoved away. “Don't touch me! You always try to get your way by distracting me! Not this time, you hear me?!” How can he be so calm? Doesn't he care how I feel?

Usagi had walked over to look out the windows. His voice was quiet. “Move out.”

“Move out. I'll help you get an apartment of your own. You can afford it now. We don't have to see each other. Leave me, and there will be no problem for you ever again.” He went out onto the balcony and lit up a cigarette. Misaki couldn't see his hands trembling from there.

I can't think! I can't think! I've got to do something. Misaki left the apartment and got as far as the elevators before he realized what he was doing, before Usagi's last words sunk in. Leave him? As if he could survive without me! The man would be dead in a week if I wasn't... Misaki sank to the floor, ignoring the elevator when it arrived. Shit!. Stop lying to yourself, Misaki! He lived 28 years without you just fine. Why? Why am I running? Why do I care if people know about us? He wants me, he loves me, he needs me – not as a housekeeper, dammit!

He remembered what Takaba had said. “It's a shame you can't be more open about it. Society sucks. Why shouldn't you walk down the street holding hands with the person you love? Or steal a kiss, or hug each other? What harm does that do to anyone?”

Misaki knew Usagi wanted to do those kinds of things with him. Usagi felt no shame about showing affection. Why do I? It's not because we're both men or because I'm Japanese. What a stupid excuse. It's because I'm a coward. I was about to sacrifice everything because I'm scared some strangers won't approve of me. All our friends and family support us, so why am I concerned with anyone else? To hell with everyone else!

Misaki stood up and marched back to the apartment. Usagi was still out on the balcony, slumped on one of the lounge chairs holding his head in his hands.

“Why did you come back?” Usagi asked without looking up. “You're better off without me. I'm just a selfish asshole who's always forcing you to do things you don't want to do.”

“I came back because I love you. And you love me. I'm tired of being a coward, of letting you down, of making you feel like you're forcing me. I'm not a child anymore and I need to stop acting like one.” Misaki slowly walked over to him. “I'm ashamed of myself, for letting my fears dictate how I act with you. For allowing myself to form the bad habit of denying you when what I really want is to be yours forever. I'm so sorry, Usagi!” Misaki's voice finally broke.

“Misaki!” Usagi pulled him onto his lap and wrapped him in that familiar and comforting embrace, cool hands holding him close. “It's not your fault! I've pushed you and pushed you, always demanding you do things at my pace. Because I'm pathetic, and desperate not to lose you. Forgive me, please! I'll do better if you help me. I swear.”

“I told you before - if I didn't want you, I would have left a long time ago. But I could never bring myself to show you, so it was just words. I'll do better, too. If you help me. I love you, I really do! I don't care if the world knows or hates me for it! I'll never leave you.”

“Oh god! Thank you, Misaki! I was so afraid I'd finally pushed you too far this time, ruined everything for good.”

Misaki took a deep breath. Then he turned his head and kissed Usagi's throat. Licked it. He felt Usagi go absolutely still. “Misaki?”

“I want you. I want you to make love to me, right now.” Misaki tangled his fingers in Usagi's hair and locked their mouths together. They kissed hungrily, but Misaki could sense Usagi holding back. “What?” he mumbled against Usagi's lips.

“People will hear us.”

“Check my back pocket,” Misaki interrupted. As Usagi found the bottle of lube, Misaki pulled off his shirt and started unbuttoning Usagi's.

“Misaki!” It wasn't a protest, just shock, as his shirt followed Misaki's onto the floor.

Misaki leaned forward and put his lips right to Usagi's ear. “Fuck me, Akihiko,” he whispered.

“Nnngh!” Usagi lost his last shreds of control. He attacked with hands, lips, tongue. The rest of their clothes went flying, and Misaki released the chair so it laid back flat. Laying full length on top of Usagi, Misaki bit and sucked on his neck as Usagi's long arms stretched down to work him open with slicked fingers.

Misaki had sat up and impaled himself. “Oh god! I...Ahhh!” He came hard, just from penetration.

“Shit! Misaki!” Usagi was panting hard, trying to hold back his own climax long enough to bring Misaki off again. Pulling out – earning him a frustrated whine – he positioned Misaki on hands and knees and entered him from behind. Thrusting deep, he reached around to stroke Misaki's cock. “I can't... gonna come, Misaki!”

Usagi sped up. “Now, please Misaki! With me!” Feeling Misaki's muscles lock up, Usagi let himself go, pumping out his orgasm deep within while Misaki convulsed and cried out. Completely spent, they collapsed onto the sticky seat cushion, Usagi smashing Misaki flat.

“I love you so much, Misaki. I didn't mean to scare you so badly. What I planned to say earlier was that you could move out temporarily, just until the media attention dies down. And we could keep seeing each other, just not here where they'll be watching. We can keep it secret still. I really don't care. It's up to you.”

“Usagi, I finally realized something. I don't want other people's opinions to scare me anymore. You, my friends and family – those are the people that matter. And they all know. So I won't run and hide and lie about us anymore. I...I'll probably still freak out sometimes, so be patient with me.”

“It's cute when you freak out.”

“Usagi! Don't call me cute! And get off me before I'm glued to this cushion permanently, you big pervert!”

“Well, you're a little pervert now, you know. Doing this outside! Shocking.” 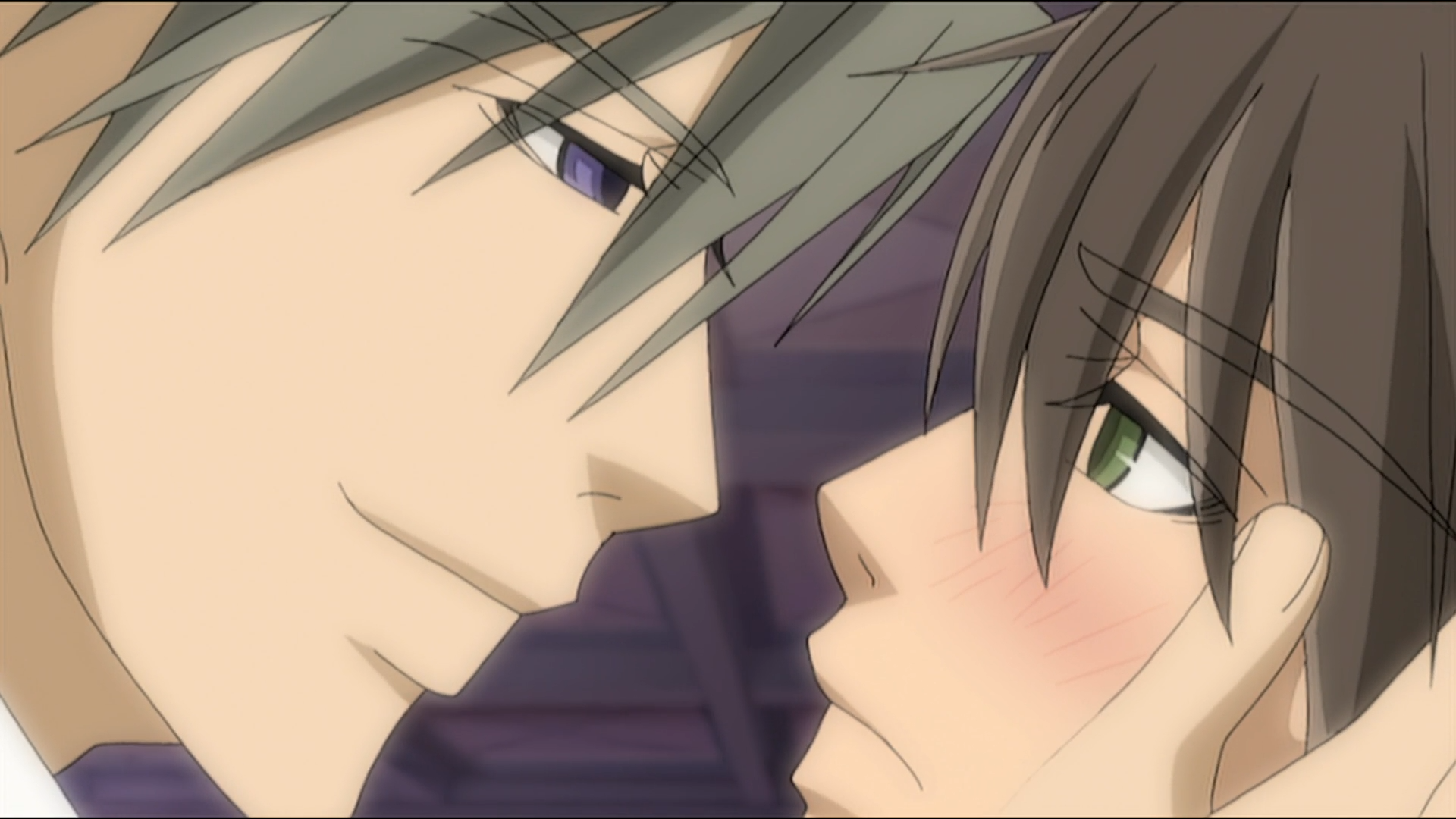