if you're inclined to turn away from the ever-glowing light

actually managing to post something for tsurugi's birthday for once ヽ( ･∀･)ﾉ
i wrote this to accompany kai's lovely artwork so !!! go check out her cute art on tumblr @ xchibikai-art !! 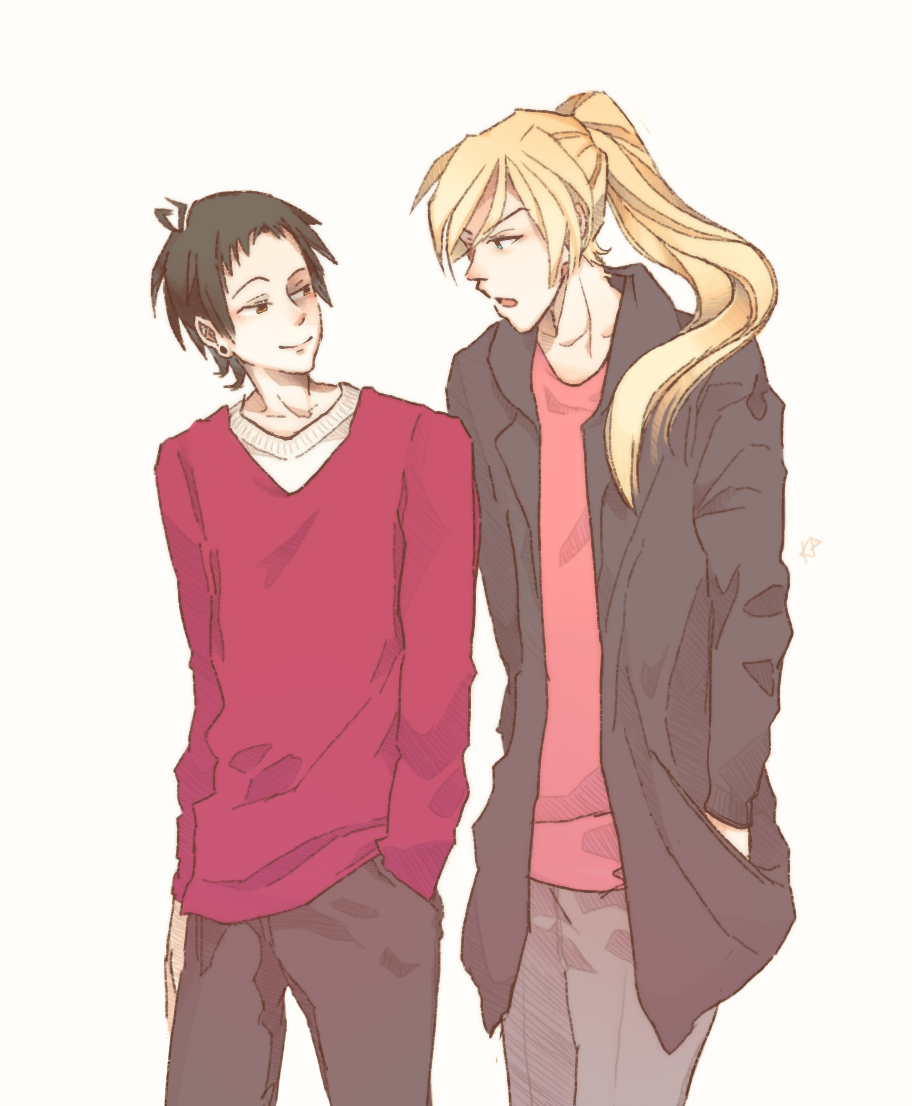 It’s been worse lately, the way Tsurugi flits back and forth between finally growing up and desperately wanting to relive his youth. It’s hard to say if humoring him helps or hurts, but at the same time, this is his first birthday without Touma. As stupid as the idea is, Yumi can’t bring himself to say no to him.

“Do you think they’d still think you were my older brother?” Tsurugi’s smirk is devious. “Or my older sister?”

“Shut up!” This time, he’s punched in the back of the shoulder. “Don’t talk about that out here.”

Tsurugi grins, turning around on his heels to walk backwards. “Uwah---- Yumi-chan is so mean. It’s my birthday and everything~” He knows just where to pick, what buttons to push to get Yumi to respond, and he can’t resist. “You look so cute in them, too. Cute, cute…”

“Eh~? That’s a little vain, isn’t it, Yumi-chan? ❤” There’s a warmth to Tsurugi’s smile now as he cocks his head to the side, and for a minute, it looks like he’s considering staying silent. It’s better, probably, to keep things as they’ve always been, comfortably unsaid between them. Neither of them has ever been particularly adept at handling emotions. “... Thank you, Yumi-chan. For doing all of this.”

“I’m not doing anything, idiot.” When Yumi steps forward, he bumps into Tsurugi, who’s stopped in front of him.

“Didn’t I tell you to shut up?” Yumi grabs Tsurugi’s sweater, yanking him forwards. Tsurugi’s eyes go wide with surprise when their lips meet. It’s not as if they’ve never kissed before. They’ve walked the line between friends and something else for over a decade now, but normally, this is cleverly hidden behind closed doors (and worked up to after several drinks). The closest they manage in public are the times Yumi put his arm around Tsurugi’s waist when no one else is looking. This is…

Tsurugi finds his hand settling on the side of Yumi’s face, fingers stroking the smooth skin of his cheek. His lips part, though the kiss stays softer than what he’s used to it. It isn’t a bad thing. Whatever this is, it has always been complicated -- just like everything else in Tsurugi’s life. They both preferred to run whenever things got hard, but honestly, lately, Tsurugi has started to feel like he wants to stop running.

He can finally picture a world where that’s possible.

When the kiss ends, Tsurugi can’t help but want more of it. He’s not yet willing to pull back himself. “You know, Yumi-chan, I really…”

“If you say it, I’ll punch you.” Yumi is smiling back at him, and he kisses his forehead, just below his bangs. “Happy birthday, dumb forehead. Now, let’s go buy that stupid magazine...”