Usagi gently laid Misaki down on their enormous bed.

“Now, what coupon did you choose?”

Misaki was horrified. Why, why, why did I pick this one? He had it in his pocket but really wanted to grab another, less awful one. He pulled a pillow over his head.

EEP! That would make it even worse. I have to stop being such a coward about these things. And it's not like I haven't done it before... Without uncovering his face, he pulled the rumpled coupon out of his pocket and felt Usagi take it.

“Ah. So you want to be in charge tonight? Why are you hiding your face? You know I enjoy it when you participate more.”

Misaki peeked out and gave him a look. Rarely was he given any choice when it came to their lovemaking. The author just took over, sweeping him away and controlling all their activities, driving him wild with his lust-husky voice and mortifying words.

“I know, I know. I get carried away. But I can control myself if you really want me to. I can do anything for you. In fact, Misaki...” his voice trailed off.

That was strange - Usagi's hesitating? Misaki sat up to face him. “What?”

Usagi sat down on the bed and took Misaki's hands, smiling gently. “Would you...consider being on top – all the way on top? Does that...would you want to? Maybe you've been wanting to? It doesn't have to be tonight, but I would like you to think about it if you haven't before.”

That was so unexpected, Misaki laid back down and hid beneath the pillow again. He couldn't deny that the thought had crossed his mind once or twice, but never as a serious possibility. “You want that?” came his muffled question.

“I would like it. I don't need it if that's what you mean. I want you to want to do it, not feel obligated to please me. It's been a very long time, but I do remember sometimes when I see you lost in pleasure, how it felt to be the one receiving. Before now, I didn't think you would even consider it, much less bring yourself to do it. No matter how I tease you, Misaki, and give you a hard time, you are my partner, my equal. You can take from me, you can be selfish.” He drew the pillow away from Misaki's face and kissed him very softly. “Just think about it, okay?”

Misaki took a deep breath and nodded. Then he kissed him back, a kiss full of desire and hunger. He let his hands roam, pushing the sweater up and off. Usagi unbuttoned Misaki's shirt and tossed it aside – he could let Misaki lead, but not be passive. He laid back and Misaki crawled on top.

He tentatively pressed some kisses on Usagi's throat, earning a soft sigh of pleasure. Encouraged, Misaki wandered lower, found a pert nipple and sucked on it hard. “Mmmm! I like that!”

“Quiet, you pervert!” he snapped, switching to the other side, tempted to bite.

Usagi only laughed softly and gently cupped his large cool hands around Misaki's head. Not guiding, just caressing, allowing the younger man to set the pace. After what felt like an eternity, Misaki slid a hand lower and let his fingers explore the contours of Usagi's erection. He fumbled with the button and the zipper, so Usagi helped by sliding his pants and boxers down, kicking them off the rest of the way.

Misaki resumed his tentative caresses. So silky, so hot, such a...handful. He touched, he slid his fingers all around, he gripped and stroked.

“Ahh. Please don't tease me too much, Misaki.” That was a reminder, that he'd better get on with it or Usagi would lose patience. He wanted to do this, Usagi's responsiveness was exciting in a whole different way. So, what are you stalling for? he scolded himself. Okay, here goes.

Repositioning himself, he eyed the appendage that so regularly stretched him, filled him, overwhelmed him. He licked once from balls to tip, caught a drop of wetness there. He ran his tongue around it, then took just an inch into his mouth, sucking on it. Usagi groaned and Misaki glanced up to see his face. It was beautiful – mouth open as he panted, eyes dark with hunger as he watched Misaki.

Misaki wanted more. More cock in his mouth, more groans from Usagi. Adding his hand, he moved his head steadily up and down. Overcome with the need to make Usagi completely come apart, he groped for the bottle of lube they kept near the bed, trying to get it without breaking his rhythm. Usagi put it in his hand, raised his knees and spread his legs.

Just a finger, Misaki thought to himself. I'll just try it. He slowed his head movement so he could open the bottle and dribble some lube onto his hand. It was already wet from spit and Usagi, but he wanted to be sure this caused no discomfort. Probing gently, he teased Usagi's tight opening.

Misaki slid his finger inside. It was so tight! And hot, much hotter than he'd...well, he hadn't known what to expect really. The muscles relaxed just a bit and Misaki moved his finger in and out slowly, then searched for that spot. The spot that drove him crazy when Usagi found it.

“Oh Fuck! Misaki!” Ah, there is it. He focused on rubbing it again and again, added a second finger. He'd nearly forgotten about using his mouth, he was concentrating so hard. But Usagi bucked upward, reminding him. Splitting his attention was tricky, but Misaki was still trying to make up his mind. Take the final step, or not? Letting Usagi's cock slide from his mouth and withdrawing his fingers, he looked again into Usagi's eyes.

Just Usagi's gaze, hot and pleading, was enough to draw him onward. Lost in those eyes, he shucked off his pants and slicked himself with more lube. He had to take a deep breath and close his eyes for a moment - he was ready to come just from touching himself! Usagi shoved a couple of pillows beneath his hips, giving Misaki better access.

Slowly, slowly he pushed into Usagi. “Shit! Relax!” He wasn't sure if he was talking to himself or Usagi who had clenched on him involuntarily. Both men waited, gasping, until that grip lessened slightly.

“N-now. I'm good. Ah!” Misaki moved. He thrust a little awkwardly at first but soon found his pace. Usagi lifted one leg and draped it over Misaki's shoulder, changing the angle. “Yes! There! Don't stop, don't stop!” It also gave Misaki something to hold onto, and then he found himself licking it, sucking on it as he struggled to hold back his orgasm. “Touch me, Misaki!” Usagi reached up to grab his free hand and lead it to the neglected cock throbbing between their bellies.

Misaki shouted his own release, thrusting a few more times as he pulsed within Usagi. "Nngh, huh, huh. Holy shit!” he gasped and collapsed against Usagi's chest. He felt Usagi's cool hand stroke his hair as they both fought to regain their breath.

“Amazing. You are amazing Misaki. I love you so much. Thank you.” Usagi's voice was full of tired satisfaction, almost purring.

Misaki managed to raise his head enough to stare in wonder. “I...I...!”

“You.” Usagi chuckled and caressed his cheek. “Oh my. Why tears?” He wiped at them.

Misaki hid his face. “Too much. Love you too much!”

“Come here.” A tug on his shoulders. He had to slide out, earning a little grunt from Usagi. Then he was wrapped in a tight embrace, peppered with kisses all over his face.

“It was perfect. You are perfect. I haven't come that hard in a long time! You made me crazy!”

“Shut up, pervert!” Misaki was completely embarrassed now, but it was comfortable somehow, the world returning to normal. “Don't...don't expect that to happen again anytime soon.”

“You make me happy,” Misaki mumbled.

“Misaki, you're a liar. Help me up – I haven't been in that position for so long, my back and hips are going to make me pay for it. But it was oh so worth it!”

As Usagi staggered off to start the shower, Misaki made a token effort at straightening up the room. He tossed the coverlet into the corner – he could do laundry tomorrow. Picking up stray articles of clothing, he found the crumpled coupon. Smoothing it between his fingers, he read the message, “Misaki takes the lead.” I guess I did. Huh. I think I'll keep this, as a reminder.

“Misaki! You marked my leg! Go get the camera!.” 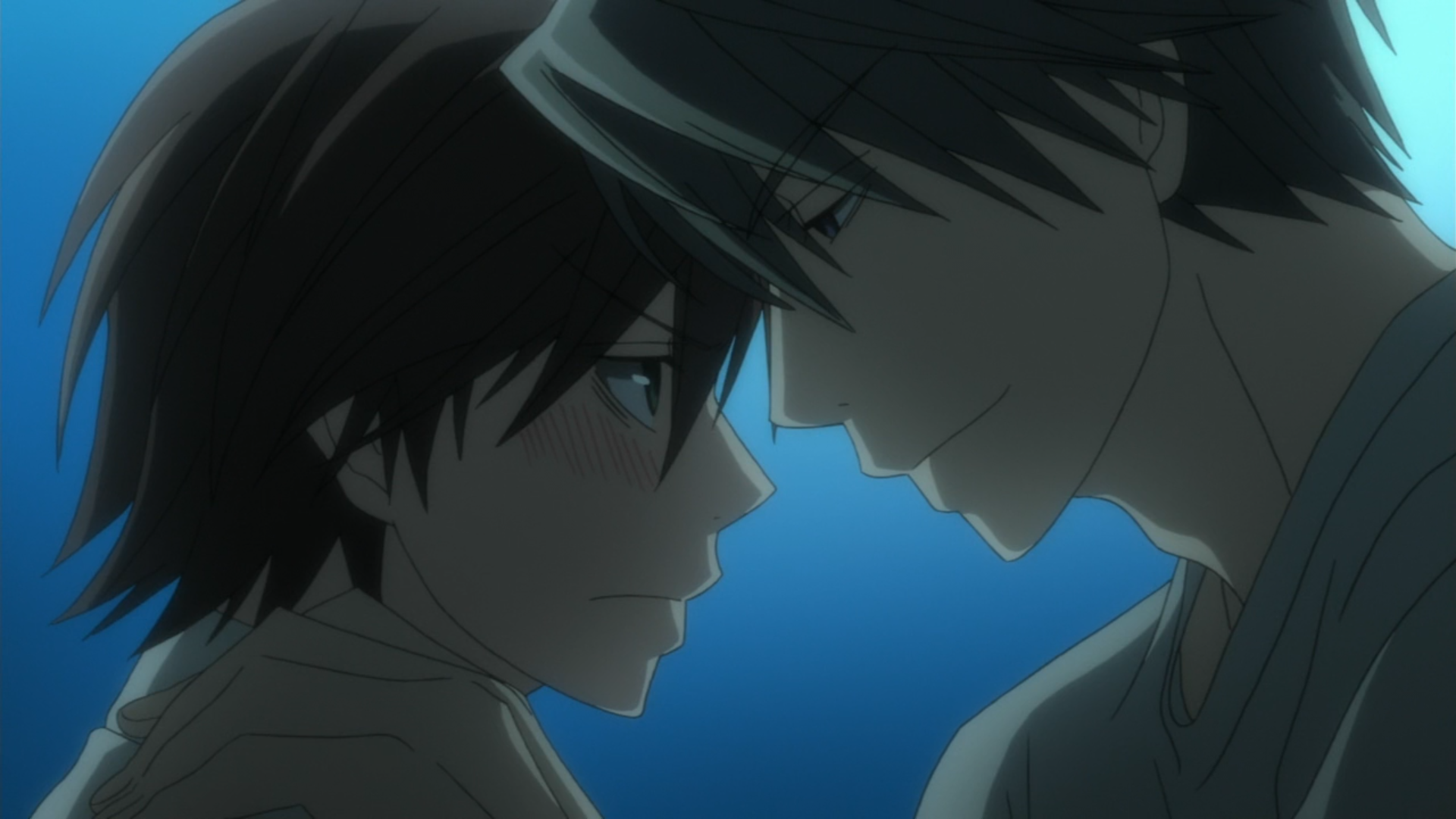 So there's a movie in the works. I think the movie will need a hit single, maybe by a J-pop band like Bad Luck? That won't be for a while though. Hmm, who will we visit next?