A huge Tyrant faces you, though you don't end up squished between his fingers.

I don't really write that much, and this was typed down pretty fast and without rereading on my phone, so please have mercy ;w;)/

I'm kind sad there's so few content of those big Damnation Tyrants, so guess I'll try it myself to create content for em-
They're so great, they need more love UwU

(The Tyrant in this is actually my Oc Claw, but it could be any normal tyrant as well.)

The Tyrant, one of many that were let out and now roamed all around the city. Walking around menacingly, their sheer size and weight destroying anything in their path, buildings shaking around them.
Now one of those beasts is standing right there, in front of me. Unmovingly staring down at me, with those empty white eyes, brows frowning upon me. I can't move- frozen in place, not that it would make a difference if I'd run. Two steps of this brute would be enough to get ahead of me. This is it.

I can't tell how long this has been going, it feels like minutes! Why hasn't he moved from the spot, did his duty and get rid of me? What was taking him so long? Was he... Hesitating...?
"S-stay there!", I told him, my fear shaking in my voice, "Stay there!" This time more demanding. Taking a step backwards, then another one, in an attempt on creating a distance, finding a possible escape.

One little stomp and the gap was instantly closed again. Of course, as if he would listen to me..! And yet, he didn't try anything to attack. His tall presence solely looming, his gaze fixated on me. Nothing to read from his expression,what he may be thinking.
Examining this mountain of a man, i noticed all the metal, screws and what not that held his coat together, practically pushing him inside it. That must feel so uncomfortable..

When I got to his arms, then to the hands, i felt ood. They weren't fitting to the rest of him, completely exposed, not like the others I've seen..
His hand was huge, a bit too big in proportion, even for him. Long claws instead of finger tips, sharp and dangerous.
The other one clenched tight into a fist- visibly softening as i noticed it though, revealing the sharp claws he has as his other hand, as well. It was slowly reaching towards me, attempting to grab me. I felt my legs shaking, my heart pump, I took the chance, my body jumping into a sprint away from him!

Just keep running, hopefully he wouldn't follow you and you're finally save, i thought.
Just then I heard loud stomping behind me, felt the ground shake more and more as he was catching up on me. I looked behind me, this giant charging at me with full force.
I immediately sped up, hoping it would do something, ANYTHING! Just as I was facing forward again, looking ahead of me, I saw it.

I SHOULDN'T HAVE LOOKED BACK! I yell at myself, but why bother. This is it, I thought, turning around to face him. He was already standing there, right in front of me, just like before. His claw reaching for me, his movements slow and calculated- I close my eyes shut, my body is shaking, but it's no use doing anything now.

I didn't feel my head squished, nor my body getting sliced up or pierced. Instead, I felt as if slowly being lifted up from the ground, gentle, delicate. As if picking up a fragile flower.
Though my breathing got tense, so do my muscles, my heartbeat still going way too fast, in an attempt to convince myself to open my eyes. When I did, I was facing big eyes staring at me, the tyrants face, up close. I want to crawl backwards, but the tyrants fingers were stopping me from falling.
Taking another look at his face, I noticed it being calm and much softer than the tense stare he'd had before. He was holding my shaking body so secure. Together i got the impression he means no harm- but why?
We stayed like this for a while, counting on how my breathing and heartbeat slowed down, my body calmed again. Though I couldn't get a single word out.
His unmoving presence not making any sounds either.
I took a deep breath, and hesitantly lifted my arm up, slowly moving it towards him. His face was moving away, keeping the same distance as before. As if my tiny hand could make any sort of damage to such a big Tyrant, though, his head is his most exposed body part, and thus most vulnerable. Aside from the claws holding me.
Stretching my arm further out, my fingers slowly touch his forhead- making us both shiver and freeze for a second. Fear overcomes me once more, i messed up, just a little squish and I'm history!

But against of what I'd expected, his head pressed against my fingers, my hand now holding his forehead.
It felt so weird, like taming an animal, gaining its trust. But is a Tyrant like an animal..?
I stood up a bit to place my other hand as well, then my forehead on his.
I heard him making a sound, similar to a... Purr..? How can this... Be so cute..?! 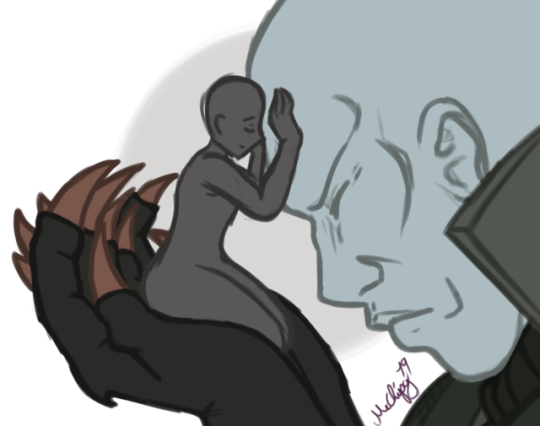