So, I'm finally brave enough to post something that I've written. This is an absolute first for me, so I'm positively terrified. I do hope that you'll enjoy and I'm looking forward to your feedback. Constructive criticism is more than welcome! 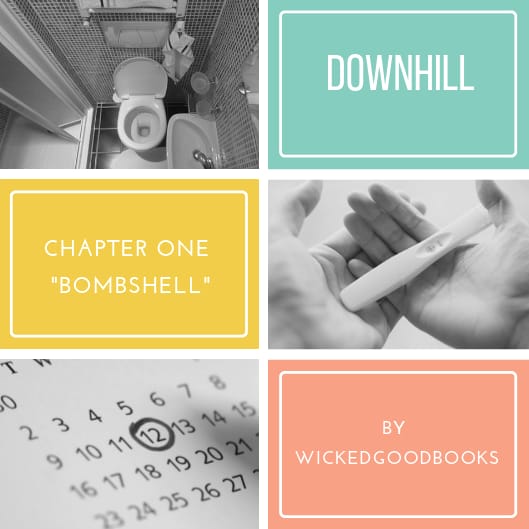 A heartfelt “FUCK!” echoed off the bathroom tiles, followed by a quick and desperate, but silent What now?

She stole another glance at the offending plastic in her left hand. Nope, still the same outcome. But those cheap tests weren’t all that reliable, were they? Good thing Claire Elisabeth Beauchamp was prepared for this bout of doubt. She’d bought another one in anticipation of a vortex of thought circling around the same thing over and over again, even if she did finally have an answer to the question she hadn’t dared to ask for over 2 weeks. Even better that she had thought not to just use the loo, but peed into a small bowl, so she’d have an easier time with the second test. And the third. Okay, maybe three was a bit excessive. But then again, with that kind of equivalent of Schrödinger’s cat, who wouldn’t want to really make sure? Absolutely making sure would include confirming it with an OBGYN, of course. The tests were really just for her peace of mind. Peace of mind, yeah, so much for that.

She’d entertained the idea of a pregnancy only for a split second or so, and only because the symptoms she’d experienced over the last couple of days went hand in hand with her period being late. Too bloody late. Claire had never been the most diligent in tracking her own cycle, simply because there wasn’t much reason to do so. She always knew roughly when it was supposed to start, but hers just wasn’t one of those cycles that run like a clockwork. Hers was messy – in the figurative sense. And in the literal, too, but then again, whose wasn’t? It’s a bloody business, one’s body ridding itself of the monthly evidence that you had failed –yet again– to conceive. But this time, she hadn’t, apparently –failed, that is.

Here she sat now, staring at the second plastic stick that she’d dipped into her own urine, faced with the increasing unavoidability of the high probability that she might, in fact, have conceived. Which brought her back to her original, heartfelt statement. Fuck. Bloody, goddamn FUCK. Fuck, indeed. That’s what got her into this situation in the first place, hadn’t it?

But how? She snorted at that thought. Good God, Beauchamp, you know bloody well how that happened. And you a medical-student-to-be, too!

She wasn’t going to take a chance on this. Nope, she was going to be sure. And she’d paid for it, so she might as well use it. Ripping the third package open, Claire took out the final stick and dipped it into the bowl of urine. The liquid finally deemed done with and unnecessary for further proceedings, it was unceremoniously sent off with a forceful flush.

There was nothing left to be done in the tiny bathroom. No medical cabinet to be reorganised, no towels to be neatly folded. Now, she could only wait with nothing to distract her. Another 7 minutes passed before she picked up and looked at number three.

Eyes squeezed shut tightly, she dropped her head onto her knees and held onto them, trying to keep the overwhelming urge to vomit at bay. She couldn’t be sure, but she thought that this particular attack of nausea wasn’t due to what the two pink lines on stick number three confirmed, yet again. She was, indeed, pregnant.