The Years in Between

Love . Betrayal. Obsession
What if there was it all between the two characters who shared the best chemistry in MCU? What if five years was a long enough time to move on and then be dragged into a fight that tears their world apart? What if love is not all there is to prove loyalty? What if there is more than meets the eye ? Fingers will be pointed and loyalties tested as Steve and Natasha's lives take various twists and turns leading up to Endgame.
This work deals within the character dynamics , relationships , emotions and events happening within the five year time frame that we all would have loved to see explored in ‘Avengers: Endgame’ . It would have been interesting to see how ‘Captain America’ and ‘Black Widow’ romance.

Disclaimer: I do not own any of these Marvel characters . This is just an attempt to soothe my broken heart after bidding adieu to a decade worth of stories and characters which I had come to love .

I kept imagining various things which may have happened within those five years in Endgame. As to why 'Romanogers'...you probably don't need that answered if you are here but just to mention, I believe these two had the best chemistry among all the six original Avengers and it would be really really interesting to see them develop a romantic relationship. I would like to keep the essence of the characters close to the MCU (bcz you wont love someone if they were anything but themselves ;) ) but since this is a work of fiction , its obviously canon divergent.
Enjoy and feel free to leave comments , criticisms , kudos …whichever you feel like.

Disclaimer: I have no claims on the pictures and gif's I used. They were all taken from Google Images. 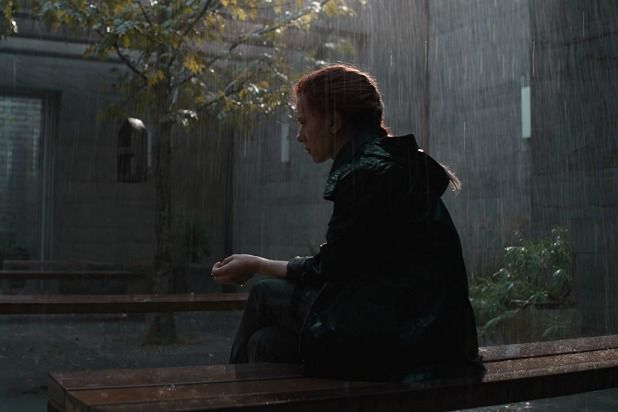 At the compound veranda.

Its been eight months after the decimation. Nat’s sitting on the stairs near an indoor garden with sun rays being sieved in and creating a mesh of shadows and sun. Her hair is longer and braided in a loose sideways braid with a few strands around her face. She had deep green sweater and slacks on. She was sitting with her chin on one of her knees with the other leg bent around.

Bruce saw her sideways approaching her. Her fixed at the dance of light and shadows. They were also rimmed red and slightly swollen. Her expression was one of calm resignation …or one tired of struggle maybe. There was red fire on her head and her lips looked perfectly plump and red. Even at the end of the world she looked gorgeously battered. One could sense grief around her, in her and yet he couldn’t stop thinking that she looked ethereal.

“What’re you doing”, he asked as he approached to sit a couple of stairs below her with his back to the wall in order to face her.

“What do you want me to say”, she smirked an eyebrow playfully and curved her lips into a smile as she looked at him, there was a shine in her eyes, one could tell it wasn’t due to playfulness.

He drank in her expression for a second and smiled with eyes cast down at her pathetic attempt to conceal …conceal some deep rooted, buried pain.

Finally, this moment of pretense was over and they both smiled a little at each other.

“We all learnt that eight months ago the hard way...didn’t we”, pat came her reply.

She pulled her knees closer to her and replied without looking at him, “ I’ve  cried my fill. Didn’t stop myself.”

“But you didn’t share. Don’t do this anymore. Just talk it out.”

She maintained a straight face as much as possible and said, “I’m not exclusive Bruce. Everyone on this planet is grieving. Besides you didn’t realize maybe that I’m not one for therapy and support group sort of thing.”

“Well, you did share once.” At this her expression changed and she lifted her face from her knee to look at me briefly. She started to look uncomfortable and yet I could not pull my eyes away from her. Finally, I managed to do so and bailed her out of this situation. “I’m not talking about me but why don’t you talk to Steve?”

Until 3-4 months after the snap we had spent time to help however we could which was basically explaining to people about this untimely apocalypse which had literally tore us in half. Then people had accepted this disaster and started to pick up their pieces helplessly. Humans after all, have the tendency to move on, make do with whatever they have left and live. There was no other choice.

We failed once and then again on ‘The Garden’. Tony was back and recovered and had married Pepper in a   really small and hush ceremony and moved to some small property in the countryside leaving behind his flashy Stark Tower …and us.

Thor went away to settle the remaining Asgardians. I spent most of my time in my lab at Stark Tower trying to figure ’myself’ out. That left Rhodes, Steve and Nat. Rhodes had spent the first 5 months with us supervising ‘world order’ the best way we could and now he was mostly in some other part of the world. Steve I’d heard was spending most of his time with the various support groups here.

I sensed that left her mostly alone.

Suddenly there was a gush of wind which blew her hair into her face and sprayed it around. She momentarily started to fix it and tuck it behind her hair. Gods…she was beautiful. It sounds sadistic but her pain made her look more and more beautiful in an otherworldly way. She looked like a garden ravaged in the storm and thunder and then washed down with rain. How could he leave her and go?

It didn’t take me long to do the math after the battle that they’ve been together.

“Bruce”. Her voice brought me back and I replied with a surprised ‘huh’.

“Thank God”, she said. “I was beginning to think that you’ve done some weird experiment on yourself and gone into coma.”

We both laughed a little at this feeble attempt at humor.

There it was again, the faraway hollow look in her eyes. It’s like pain had become an inseparable part of her aura. “You shouldn’t be like this”, I said suddenly, a little agitated.

“That goes for the world too”, she replied right away.

“What happened to the world wasn’t in our control. We fought to the max. But what happens to us, to you is in your hands Nat. I know we ended before we began Nat but you both have a chance.”

She lifted her face with tears in her eyes which she tried to blink away.

“Millions around you don’t have that which you both have…each other.”

“Maybe half of each other”, she replied to me tearfully. “Probably that’s how we all remain now”, she said as she closed her eyes and quickly wiped a lone tear on her cheek.

“Nat”, I moved closer to her. “Look at Tony and Pepper”, he miraculously made it out of certain death and now he’s living with his life, with Pepper. I locked my hands and looked at them for a long second.

“As much as I hate to admit it, we won’t have worked out.”

She looked at me with a slightly pitiful and sad expression. I struggled to recognize that look, I’ve seen it somewhere…yeah…it was a look Steve often had on his face. An expression of empathy and compassion. I had never noticed it on Nat though. Maybe this is what a close relationship does, the other person starts to imbibe things subconsciously from their part. Did they even feel the same way now…? I didn’t want to dig deep.  “But you two did”, I continued. “Please be happy Nat, even if it means I’ve to ask you to be with someone else”, I looked away as I said so, it’s too hard to ask your love to be with someone else…someone they love.

Suddenly I felt her hand on my own and I turned around to face her. Her eyes had tears and she said between darting eyes in a very soft voice, “I’m sorry. In some ways, I’m responsible for you abandoning us, your life, yourself and this planet. I’m sorry. It hurt a lot when you left and then we had to run away and then Steve and me…just happened.”

I looked at her while she narrated between grief and guilt.

“Don’t be sorry. It’s just like all things, just like everything that has happened to this planet. It was beyond our control. Would I like you in my life again? Yes. Do I want things to be between us the way they were when I left Sokovia and to see what we could have been? Yes.”

Her hands moved away from mine and her eyes cast down.

“But that won’t happen”, I said. “Will it?” I asked in rhetoric with just a tiny bit of hope which stung like a shard when her eyes broke away from mine and her face had guilty resignation.

“See, it won’t”, I said trying to maintain calm in my voice. “It is because you…you…”

“I love Steve”, she said clearly and calmly.

It wasn’t like I didn’t know it already but it hurt a little hearing it directly from her. There was also a sense of closure as far as we were concerned. Maybe I needed to hear it from her.

“Then what’s wrong?”, I asked. “Does he not…”, I hesitated and fumbled to put it rightly.

She smiled a little to herself and said,” He does. But we all are mourning. And everyone’s mourning in their own way.”, she stopped.

I suddenly laughed at her a bit and said, “You both are alike, too stubborn to admit that somethings happened that you can’t make right, can’t undo. Just do what you can.”

She looked up curiously and asked,” And what is that?”.

“Get a life”, I said at which she laughed and replied, “You first” and looked at me happily.

“Oh, don’t worry about me. I already have plans.”

“Please don’t tell me you have a date with the nuclear reactor or Gamma calibrator”, she teased.

“Well, definitely not for another week or so. This experiment is driving me mad so I’m going to Thor’s for some buddy time.”

“I will. That means you’ll be alone here for a while.”