The Ballad of Thieves

Memphius never expected to even leave the top of the mountain, let alone get himself tangled in a mess of thieves, dragons, jarl pissing contests, sex, and falling in love.

Eh. It was bound to happen, anyway.

I own nothing but the characters I create. I don't own the plot for the most part; Todd Howard, if you're reading this, take your time on Elder Scrolls 6, click away when you're done reading the before notes, and please don't sue me.

Credit for the cover goes to me.

And so we begin. 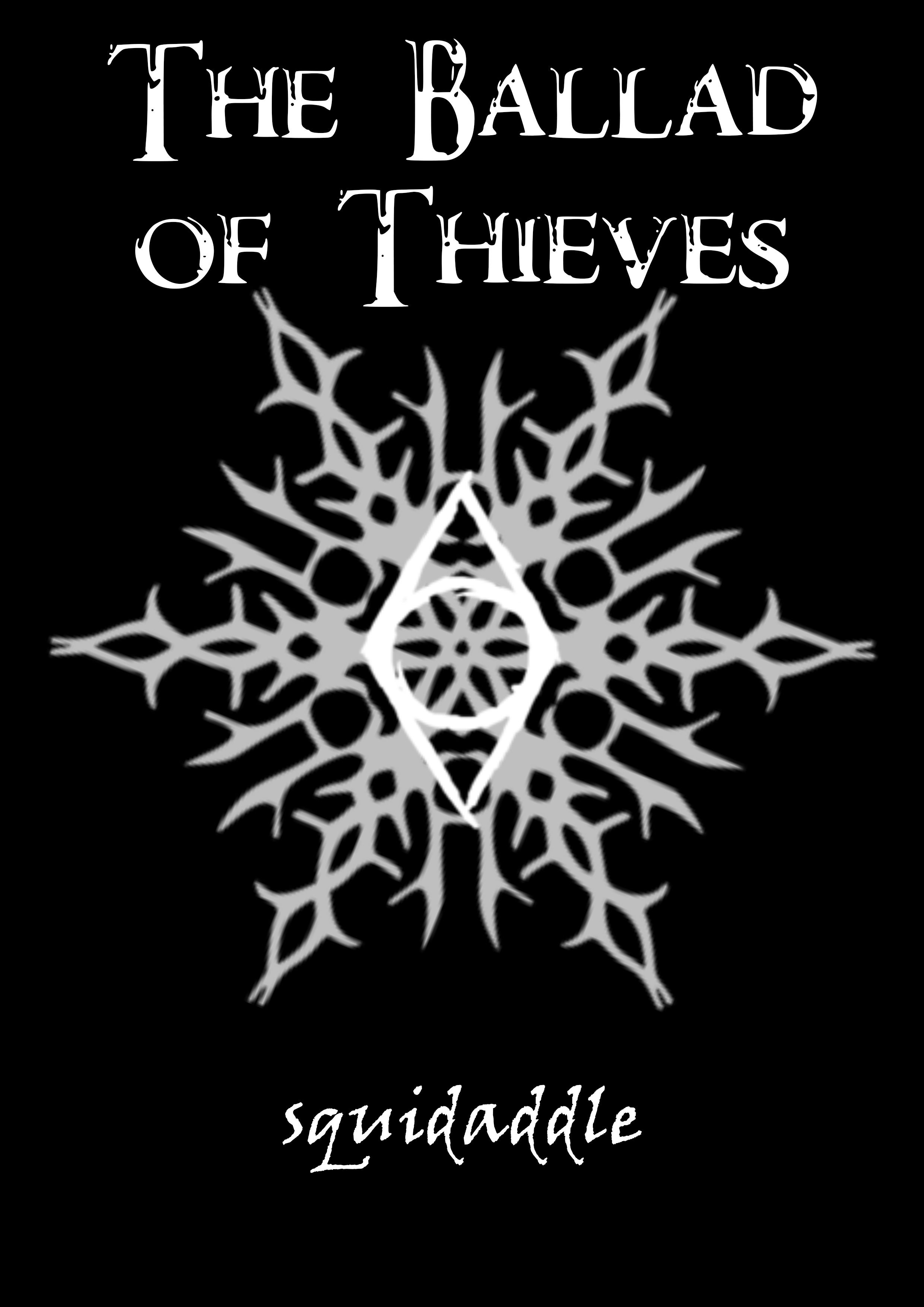 Within the Forgotten Vale, a secluded, almost dead part of Skyrim that houses the last of those who worshiped Auri-El, there existed a small settlement. It housed a maximum of less than one hundred occupants; all of which were the remnants of the race Falmer.

Two of the snow elves had been named Edhelis and Civenna. They were a young couple (for elves, of course; they had been well past the hundred year mark) who were welcoming their first child. A boy; the youngest snow elf in existence, and one of the last ones to ever grace the surface of Nirn.

The entire village was more than excited, for it had been so long since they had been able to rejoice at the birth of a new child. Snow elves were a very intelligent and technologically advanced for their time, along with the dwarves. Falmer helped create some of the only working machines in all of Tamriel history. When both races were mysteriously wiped from existence, what was left of their creations and belongings and even themselves became very rare and sought after by most for their high value, enough coin to live a full comfortable life off of. This caused the remaining stragglers to fall into hiding, and eventually go completely extinct. They had little companionship besides their own kin, and a limited number at that, along with the abandonment of the Mer name, falling to being referred to as snow elves, not to be confused with their forgotten brothers.

From the beginning, the village knew he was special. Not only was he proof that the snow elves had survived, but he had a peaceful aura surrounding him. Some of the older elves believed he was blessed by Auri-El himself. But the Village Elder, a wise old man who remained unnamed to his people, knew differently; the young, innocent babe was far from blessed, for he was the one that Auri-El had cursed with the burden of sacrifice. From the moment he laid eyes upon the child, he was fearful for its future of hardship. The soothsayer found himself angered at his god, for the first time in his long, seemingly endless life.

One day, the Falmer revolted. The cursed, blind creatures had completely decimated the small village, and everyone was killed - everyone except the young elf and his two guardians, appointed by the soothsayer when he knew that it was necessary in order to save the boy. He stayed behind to distract the Falmer, and his parting words to the two young men were "Get the child away from this place. Do not stop anywhere. Trust no one. Take him to the Throat of the World, that is the only place I know he will be safe from harm. Be prepared to give your lives, for this journey is far from easy."

Along the path to the entrance of the Forgotten Vale, one elf became eerily quiet. "What troubles you?" The other asked, curious as to his friend's silence. "We have time to mourn our loved ones, worry not for that. But for now, we were given a difficult task, and I for one refuse to rest until we get the babe to safety. This is far from the first time we have had to move quickly after loss."

The first elf's eyes slid over to the resting elfling. "What say we forget our orders?"

"What on Nirn are you implying?" The other burst, then immediately looked guilty when the child asleep at his hip mumbled and shifted. "We have orders. We cannot shove them aside when they inconvenience us."

"I mean," The other continued, moving closer to the elf as he lowered his voice. "What say we disguise ourselves and get rid of him at the nearest city? We'll be sure to obtain more than enough coin for us to flee to somewhere, anywhere, so long as its away from his wretched place."

His companion was shocked and disgusted at his friend's behavior. "What is wrong with you? He is not but a child, and the last of the race of snow elves as well. We know better than anyone what these people will do to a race unlike their own. We're living proof of their hostilities! I refuse to sign the sigil of death for a child!"

After being scolded in a whispered tone, the scorned one snorted quietly and relaxed, leaning back and landing on the cold ground with a thump. "I only joke, brother." He promised with a wave of his hand.

If only it were true. During the cursed night that followed the cursed day, the elf attempted to take the pale child away, and when the boy screamed, the elf cut part of his neck open. The scream woke the other elf, who grabbed the elfling and ran as far away as he could.

After walking straight through the night, the elf stopped to inspect the child's neck wound. In the time it took for them to run, it had given way to infection. If left untreated, he was susceptible to extreme illness and possible death. He tore off part of his ragged shirt and tied it gently around the torn skin on the child's neck.

They did not stop again. The elf walked for days without rest, gaining blisters and cramps and almost fainting with fatigue. When the child tired, he carried him on his back. After what felt like the longest days of his already great lifespan, they made it to the Throat of the World.

Upon approaching the door to the large stone temple that seemed to scrape the sky above, the elf set the child down upon the steps, knelt down, and whispered into the air around him "Please, master Auri-El, hear my plea; let the child suffer no more. Lest you forget the rest of your children." And with the sentence complete, he took his last breath and fell to the frozen step, dead, his last remaining motion to curl himself around the shivering child in protection.

The child was taken in by the Greybeards and the elf was buried along the mountaintop, his grave unmarked but a headstone reading "Gods of mer guide your brave soul through the afterlife". The wise men cared for the young elf, treated his wounds, and taught him the ways of the Greybeards, despite his young age. They lovingly called him Memphius, and raised him with knowledge and happiness.

The child got along swimmingly with their leader Paarthurnax. He seemed to have a way with the dragons that had forever gone unseen by all others. Along with that shocking discovery, he also had a spectacular talent at virtually every instrument known to exist, and a memory that rivaled that of no other. He truly was one of a kind.

They remained ignorant to the fact that the elven boy had dragon blood within him. Despite this oversight, they treated him as one of their own and he was raised Dragonborn. Little did they know, this action saved Skyrim, and perhaps the whole world along with it.