Would I lie to you?

Sometimes, trickery is the best way to find the truth...

I saw that you liked the other one, so this one is for you :)

Myc_Greg: just a quick way to say thank you for all the love ❤️

Beta-read by notjustmom, thank you darling!

Sherlock storms out of the morgue, nearly knocking Lestrade over in his hasty departure, needless to say, he is not happy.

"What's wrong with him? I came here to talk to him about --" but his question is interrupted by a giggling Molly.

"Read that!" She quickly pushes a sheet of paper in Greg's direction and waits a bit before she adds with a smug, "what do you think of THAT?"

"Oh. My. God. Maybe it's going to work!" Greg, after shooting an admiring glance at Molly, reads the paper again.

I, William Sherlock Holmes, in an act of pure folly pledges to follow the rules below for the period of a day. Starting today at 2:30 pm:

"I give them five hours. No, four!" Molly smiles proudly.

"Even less if they are actually together..." holding his phone with a little smirk, he asks. "Hum, do you know where Sherlock ran off to?"

"Home, for an experiment," she turns to look at the clock, "John's shift ends in five or six hours."

"Oh, but don't you think that Sherlock seemed a bit upset?" Greg continues with an angelic face.

Seriously, the pathologist replies, "certainly, he shouldn't be alone!"

Chuckling, Greg texts John.  Is everything okay with Sherlock? He looked upset. Anyway, he's going home right now, so he's probably fine.  Forget it!  before putting his phone back in his pocket. "Coffee?"

Sherlock was safely alone in Baker Street, looking into his microscope. Telling ME that I'm a liar... I am NOT!  Okay, I lied to everyone when I was away, but it's not the same. And not... not sharing his... feelings with everyone isn't lying. To say that I am incapable of stating the truth without flourish, without covering everything in lies... It's not true!  In fact, I am too honest for my own good!

He was still trying to convince himself when a voice resonates from the entry door, "Sherlock? Are you here, are you all right?"

Oh no... It's not fair. Okay, honesty. I am able to be honest, no? His anxiety level was already off the chart when a hand touched on his shoulder. No, no, no, no --

"Sherlock?" John is now standing beside him, looking at his friend with concern, "you are not in your Mind Palace, your eyes are open! Tell me, what's wrong?"

John, anxious of his friend's silence, starts to panic a bit. It's not drugs, he's not sick, a bad experiment maybe? On himself? "Sherlock? I'm starting to --"

Closing his eyes, the detective tries to focus his attention to be able to mutter that 'he's absolutely fine' but the pathologist's voice keeps pestering him. Liar. Liar. Liar. You always cover the truth with lies, you're never honest about your feelings. Liar. Liar. Unable to resist the childish gesture, he quickly covers his mouth with his hands. Here you go, I can't talk anymore! Problem solved!

John's voice, now cajoling, was really hard to resist, dropping his hands in exasperation, the tall man shouts "I AM IN LOVE WITH YOU!" Damn, I wasn't supposed to say... that.

"Oh..." John murmurs as admiration and love start pooling from his heart to embrace his whole body at the idea of Sherlock'd courage and honesty. Kissing him reverently, he replies with a soft, "me too."

Shaking, not believing what's going on, Sherlock stutters "you... too?"

"Yes, without a doubt..." The doctor, pressing his lips upon his best friend's lips, protesting as the man is reaching for his phone. "No... no phone right now, you git --"

"Just need to send a thank you note...", a second later the phone is forgotten due to John playing with his hair.

In a coffee shop near Barth, Molly smiles at Greg after she checked her phone, "It only took two hours! You owe me another fancy latte, extra-caramel!" 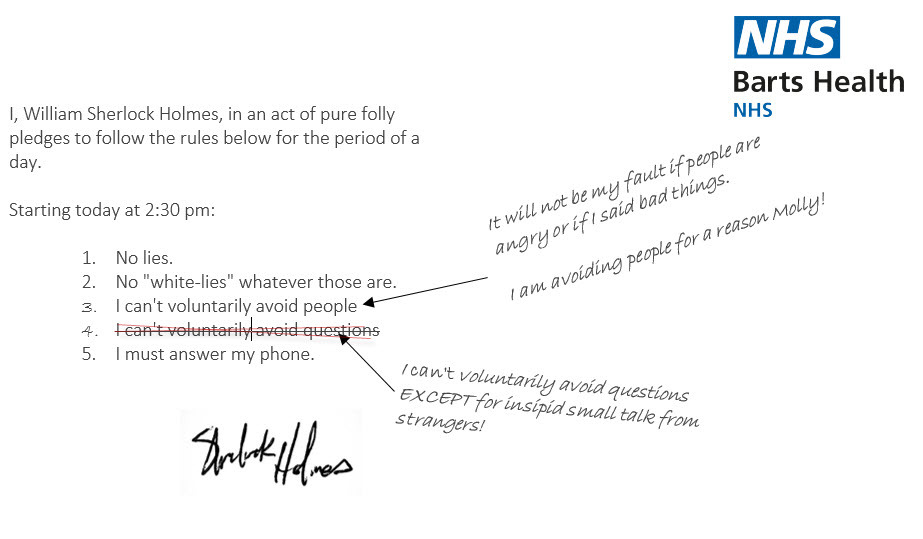 A little silly one :)

Inspiration: Would I lie to you / Eurythmics