The way people look at Peter, like he’s something fragile and impermanent, it scares him too much. So he pastes on a grin and goes on like the past five years never happened. He doesn’t quite know how to function otherwise. Then, Johnny finds him. 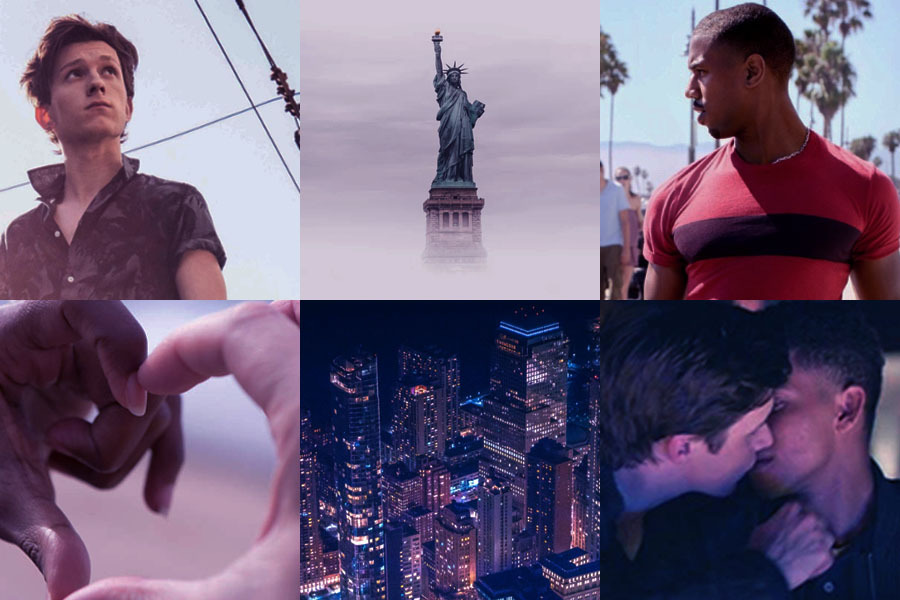 Returning to a world that’s gone on without you is… off-putting. Peter doesn’t know who’s lived, who’s died or vanished in the five years since Titan. Tony offers him the database, but he logs in once, finds May’s name in the list of survivors, and he can’t swallow past the lump in his throat.

His aunt is waiting for him on the front steps of the brownstone, her eyes red-rimmed with tears. “Peter,” she gasps, and she squeezes him so tight he could swear she has super-strength too.

He gets calls from Ned and MJ, but he doesn’t try reaching out to anyone else. The way Tony and May look at him, like he’s something fragile and impermanent, it scares him too much. So he makes sure to answer their calls a little more quickly, pastes on a grin, and goes on like the past five years never happened. He doesn’t quite know how to function otherwise.

As he’s swinging over New York, pausing here and there to join the reinvigorated workers and civilians in cleaning up the heaps of rubble and lend a helping hand, people shout joyously and ask to take pictures with him or hug him. “Spider-Man’s back!” one guy shouts, live-streaming as Peter hoists a chunk of concrete off the streets.

So, word spreads. He’s happy he was missed, it makes him feel like he’s really made a difference in New Yorkers’ lives. But when he sails alone above the streets at night, it still feels hollow, like he’s a stranger in his own city.

Then, Johnny finds him.

Peter’s on his nightly patrol, swinging home after helping with clean-up in the Bronx when his spider sense blares. “Oh shit,” he shouts, and he’s snatched out of the air and thrown onto a rooftop, flames licking at his costume.

He stops-drops-and-rolls, scrambling to his feet and spinning around to glare at his attacker. “Jesus, Matchstick!”

“Five years and four months.” The flames die down and sink into Johnny’s skin, and he stalks towards Peter, sticking his finger into his chest. “You been back four months and you never called, never dropped a line to say you’re alive.”

Guilt sinks like a stone in Peter’s gut. “I didn’t-- Life was busy,” he lies, jutting his chin out.

“You know how I had to find out?” Johnny’s eyes glint fierce and angry, the hurt clear on his handsome face. “A fucking Tik Tok of you, Pete, swingin’ over Brooklyn like nothing happened.”

“See, it was bad enough you were one of the vanished,” Johnny says, and Peter doesn’t miss the waver in his voice. “And then-- then the battle upstate happens, and I don’t hear anything, I don’t know if you survived that, and you just-- you never called? You never thought to check in, say ‘hey Johnny, guess what, I’m alive again’?”

Peter swallows hard around the lump in his throat. “I’m sorry,” he says sincerely, tugging his mask off. “Johnny, c’mon man, I--”

“I really missed you.” Johnny looks away abruptly, his eyes shining wet in the dimmed city lights. “Dammit, Pete.”

He looks down at his feet, ashamed. “I was gonna,” he says quietly. “After. I meant to, um, say hi to everyone. But May cries whenever I leave the house anymore, and-- and Mr. Stark looks at me sometimes like I’m about to die in front of him again-- I couldn’t, Johnny. It was too hard.”

Johnny is quiet as he absorbs his words, staring out at the endless expanse of lights below. “It was hard here too,” he says, but his voice no longer sounds accusatory or angry, just tired.

A painful ache swells in Peter’s chest, and before he can overthink it, he closes the space between them and throws his arms around Johnny, dragging him into a tight hug. He hears Johnny’s breath stutter but he doesn’t say anything, just raises his hands enough that he can wrap his fingers around Peter’s arms, holding onto him.

He smells just how Peter remembers - a mix of ozone and some high-end cologne he can’t pronounce the name of, warm and solid against Peter’s chest. “I’m sorry,” he murmurs again, his lips pressed against the bare skin of Johnny’s throat.

Warm fingers tighten around his forearm in acknowledgment. “Me too.”

Peter shivers, leaning up to press a soft kiss to Johnny’s cheek. “Well pretty boy,” he says with a crooked grin, “sounds like I’ve missed a few things. Why don’t you catch me up at our spot?”

Johnny chuckles wetly, but he wipes his face and squeezes Peter tight again before letting him go. “Last one to Lady Liberty’s crown has to buy me gyros for a week,” he says, and then with a burst of crackling flame, he shoots off.

“You’re on, Hothead,” Peter shouts, and he slings a web into the air after him, their laughter echoing bright in the vast empty sky.

Come yell at me on tumblr.