Lady Winter and the Red Wolf

By popular demand, a sketch of Winterfell's defenses (and a handful of named camp locations) that Emira would be ashamed to have drawn!

Here's a quick and pathetic sketch of Winterfell's defenses.

Each image is the same thing, just from a different hosting service (in case one or more vanish). 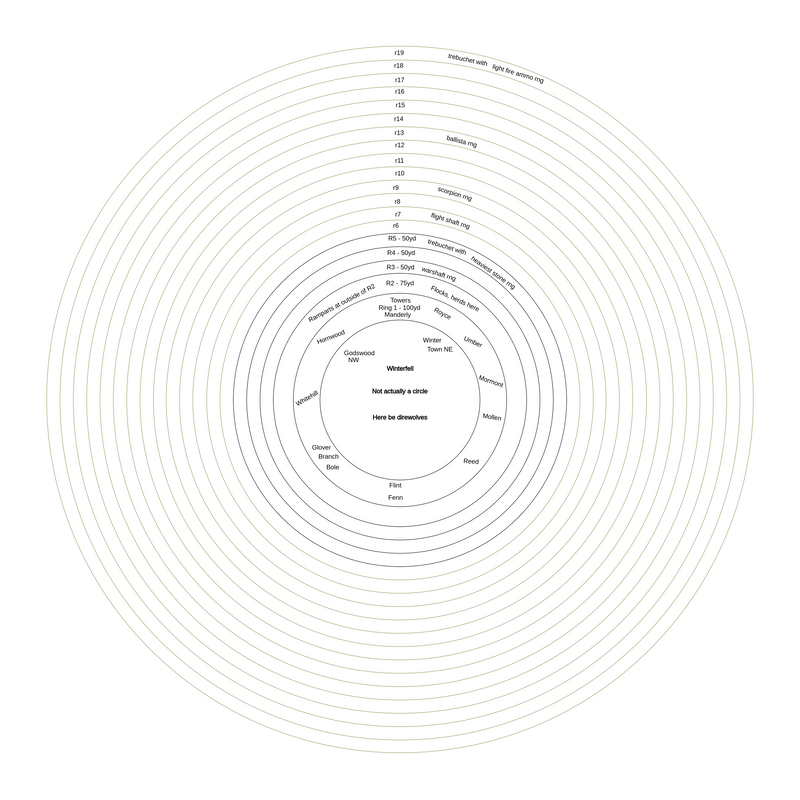 SVG (vector) version - always high quality (when it shows up): 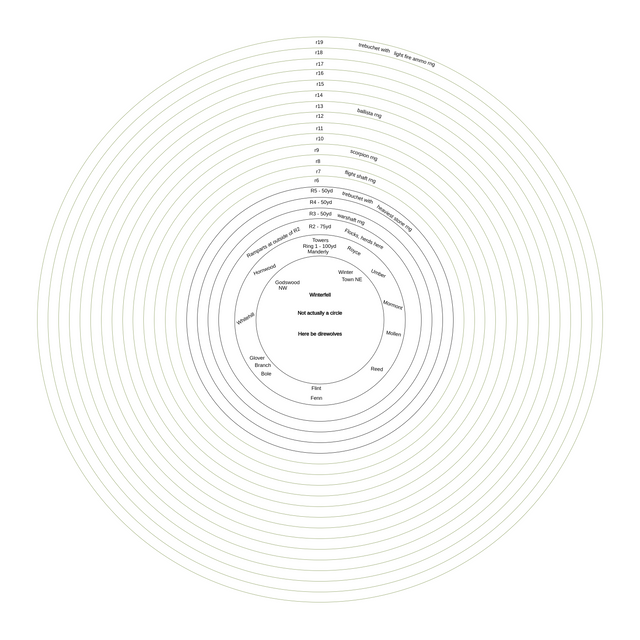 Winterfell and Winter Town is in the middle; the castle has its walls and divisions and so on, as does the Godswood and Winter Town.
Atop walls and roofs are positions for archers, siege engines, along the walls are hoardings and machicolations.
All the weaknesses have been addressed as best they can - new machicolations, hoardings everywhere they can put them, fixed, upgraded, and brand-new towers to handle old blind spots (like the godswood and a couple wall sections had), etc.

Directly adjacent to those walls is the inner moat.

Radiating out from the inner moat all the way to the Ring 5 moat are smaller moats, dividing each ring into sections (not pictured in picture).

A hundred yards out is the Ring 1 moat - between the inner moat and the Ring 1 moat is "ring one".
Here be camps - the names of a few of those are listed, since they're used for directions in story!
Here be towers for smaller siege engines, shorter than the ridiculously high walls of Winterfell, but tall enough to loose safely over the heads of all the people and animals in ring 1 and 2. When the enemy is hitting the ramparts, these are under command of the local infantry, like when the Hound was giving them orders. When the enemy is farther away, they're under central siege engine command like all the others.

Seventy five yards out from the Ring 1 moat is the Ring 2 moat - this is Ring 2!
Here be flocks and herds.
Here, on the outer edge of Ring 2 (about 175 yards from the castle walls) are the icy ramparts for the shieldwall to stand behind, as well as the ranked, elevated positions behind the shieldwall for the bow and crossbow support.

50 more yards out is imaginary Ring 7.

and so on at 50 yard intervals.

The imaginary rings are there for ranges!

Basic ranges are the distance from the wall for a projectile flying out directly perpendicularly from the wall. All other angles land closer to the closest section of wall, obviously, since some of the distance they go is spent moving along the wall, not away from it.

Note that the placement of the defenses at the outer edge of Ring 2 was carefully chosen to be well enough inside warshaft range so that archers and crossbowmen even as far back as those on the walls can rain fire down on the enemy in Ring 3... i.e. the ones crossing the Ring 2 moat to attack the ramparts.

Note also that the Ring 5 moat is well within maximum flight shaft range for bows and crossbows on the walls... and therefore ALSO well within maximum flight shaft range for the many, many more archers in the courtyards for a hundred yards inside the walls (minus the locations so close to the walls they'd hit the walls rather than shoot over them... in which case some of them stand on platforms atop piles of supplies to be able to shoot over the walls). This means that any enemy cannot afford to take a lot of time to deal with the moat, because they're not just under artillery fire, but also fire from bowmen and crossbowmen EVEN IF the spring engine towers in Ring 1 and the archers in ring 2 weren't loosing.

Remember from Chapter 29, Ice and Fire:

"If we open [start shooting] at five hundred yards [from the walls], ring nine, the masters and the best of the marksmen will have ten bowshots, four scorpion shots, three ballista shots, and two trebuchet shots. [if we start shooting] At seven hundred yards [from the walls], ring thirteen, add two scorpion and one ballista shot; the trebuchets would be too close to the ring 2 ramparts."

That's the amount of defensive fire estimated to be able to put on a charging enemy who takes mere seconds to fill moats enough to cross (with giants and mammoths). There's no extra bowshots for opening at 700 yards from the walls, because the max range on even flight arrows is already less than 500 yards. Trebuchets shoot the slowest - slow enough that even starting at 700 yards doesn't add a third shot, because if you tried three shots at the front line, your third would be coming down right on your defenders!

Scorpions loose a little faster than ballistas, bows are much much faster, and he didn't bother with calculating the crossbow shots, since those are all over the board - goat's foot the fastest, but the windlass-wound crossbows depend very much on both the mechanical advantage and the skill of the wincher.

Only a handful of camps are listed - though these are the ones I typically use in the story when characters give directions!
North - Manderly
North Northeast - Royce
Northeast - Umber
East Northeast - Mormont
East - Mollen
Southeast - Reed
South - Flint and Fenn
South Southwest - Bole
Southwest - Branch
West Southwest - Glover
West - Whitehill (directly opposite Mollen!)
Northwest - Hornwood (go out about 2 miles total and you reach the top of the hill the House of Black and White in Westeros is/will be on)

Note that this work was once meant to be easy writing to keep my muse engaged while stalled on my more serious work, Patton's Third Army. Nearly a hundred thousand words in, it's developed a life of its own!

Hopefully this will showcase more of my own feelings on the growth of the Stark sisters through their ordeals, with the board more or less wiped clean of the old guard, and what they should and would have been doing for the months they had available.